Are You Damaging Your Hearing?

Many of us use earphones throughout the day to drown out noise in our commutes and at work. But is it prematurely damaging our hearing? Molly Crain investigates.

It starts gradually. The guitars in your favourite song no longer seem to sound loud enough, so you crank up the volume. You struggle to hear dialogue on the TV. Trying to work out what your friends are saying in a crowded pub becomes an ordeal.
Hearing loss is often not a dramatic event, but something that gather inexorably over time. Some experts believe it’s some very modern behavior – such as our increasing use of earphones to listen to music and movies – that may help  prematurely age our hearing. And it’s an issue that may be affecting younger adults much more than before.

Why should I be concerned about my hearing?
“It’s amazing how many parts of your life can have loud noise that you don’t think about or realise until too late,” says clinical audiologist Jill Gruenwald of Vanderbilt University’s Medical Center in Nashville, Tennessee. “We’re around a lot of recreational noise anymore, personal listeners, concerts, bars, movie theatres are loud. There’s lots of noise out there that we can be exposed to on a daily basis.” 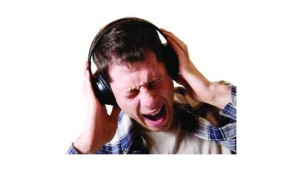 Gruenwald, who gives hearing loss awareness talks to Vanderbilt’s School of Music, explains that overexposure to loud noise for extended periods of time can increase the risk for anyone, no matter what age, to experience Noise Induced Hearing Loss (NIHL). But there’s reason to suggest that people may start to experience NIHL at an earlier age either related to their job or recreational activities, especially in the musical hub of Nashville.
“Sometimes the noise exposure in your younger years, it’s not until it starts coupling with age that it starts snowballing faster,” says Gruenwald. “So it might be that, ‘I got just this little bit of hearing loss and a little bit of damage now,’ and it’s not until my later years that it’s really going to become a problem.”

What noises could put me at risk during leisure activities?
US workplace safety bodies the National Institute for Occupational Safety (NIOSH) and Occupational Safety and Health Association (OSHA) set the standard sound exposure limit at 85 decibels, which is as loud as city traffic heard from inside a car. Extended exposure to anything above that can certainly put people at a greater risk for more hearing loss as time goes on. NIHL can happen immediately but it’s also very common for effects to not be noticeable until later in life.

Headphones on music players can reach sound levels as high as 120 decibels, according to a study from the University of Leicester, which is extremely dangerous as noises that exceed 110dB can “strip away myelin sheath from the nerve cells, which hinders the delivery of electrical signals from the ears to the brain.” If you damage your ear in this way, it’s permanent and cannot be reversed.
“Power tools are about 90dB,” says Dr Todd Ricketts, Professor and Director of the Department of Hearing and Speech Sciences Graduate Studies at Vanderbilt University Medical Center. “A chainsaw, jet ski, that’s around a 100dB. Or if you’re talking about, you know, a very loud club or a loud concert it could be 105dB. Very loud car stereo, you could be maybe even up to 120dB, or a little bit more. When you’re talking about being a couple of feet away from a gun, you’re at 140dB, which is at or above threshold of pain.”
Many people experience “temporary threshold shifts,” where hearing is muffled for a few days after a loud concert or clubbing, but then returns. A chemical process your ear does to protect itself, sound appears to lose resolution as the tiny hairs within your inner ear become fatigued. To recover, go to a quiet place until your hearing regains sensitivity and avoid causing more temporary threshold shifts in the future.

How can I tell if my hearing is going?
If you’re overexposed to loud noises when you’re younger, it’s common to have more severe hearing loss when you’re older, or have it come at an earlier age. Ricketts calls this a “delayed effect.”
A video posted by AsapScience on YouTube in 2013 asks“How old are your ears?” Trouble is, you may not like the results. Your ears may be 20 years older than you are.
If you’re worried about the quality of your hearing there are free hearing test applications you can take yourself as a preliminary step to seeing an audiologist.

For iPhone
UHear is one of the most popular and tests for hearing sensitivity, how well you can hear speech in noise, as well as offers you a questionnaire.
Mimi Test was released April of this year, has a sleek interface, and prompts you to use Apple headphones for best results and to make the test more uniform. At the end of a test, Mimi calculates your hearing age.

Android
Hearing Test has the display of a pure-tone audiometry test that is used by audiologists to identify the threshold levels of an individual. Test results can be printed, and if you download the paid Pro Version test results can be emailed.

How can tech help?
For those who do experience mild hearing loss, technological advancements like Soundhawk allow you to hone in on certain voices in crowded spaces – like bars and restaurants – using only two earpieces and lapel microphones. Invented by former ear surgeon, Rodney Perkins, Soundhawk operates via Bluetooth and sound levels can be adjusted by downloading the Soundhawk app.

How can I stop hearing loss from getting worse?
To reduce the statistical increase of experiencing NIHL earlier in life, turn your smartphone volume down to a safer level. Go to your settings and drop the volume limit to about 70%, that way you won’t be tempted to listen to your music an unsafe level.
If you’re going to a concert or music festival, don’t be afraid to bring earplugs – you never know when you might be shuffled closer to an amp.
Buy over-the-ear noise-cancelling headphones instead of ear buds. That might be the simplest way to ensure that the tunes you enjoy don’t begin to rob you of a lifetime’s pleasure.