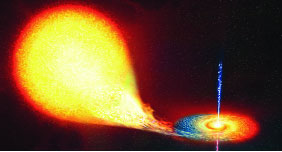 SNACK TIME  Thorne-?ytkow Objects probably start out as binary stars, shown in this illustration. A supergiant eventually engulfs its neutron star companion (right).
A star in a neighboring galaxy might have swallowed another star.
Sitting about 200,000 light-years away in the constellation Tucana, the star HV 2112 appears to be a red supergiant that has engulfed a neutron star. This strange pair, called a Thorne-?ytkow Object, or T?O, was largely theoretical until now. Sitting in the Small Magellanic Cloud, a satellite galaxy of the Milky Way, HV 2112 is the first T?O to be seen.
A T?O starts with two massive stars orbiting one another. When the more massive of the two explodes in a supernova, its core is left behind as a neutron star. One scenario posits that as the other star ages, it swells and swallows the neutron star, which gets dragged down into the heart of its sibling. Alternatively, the neutron star might be shot out of the supernova into its companion.
T?Os are hard to find because they look nearly identical to other red supergiants. Emily Levesque, an astronomer at the University of Colorado, Boulder and colleagues discovered the T?O by looking for unusual amounts of certain elements in the star’s atmosphere. The strange chemistry, the team reported May 30 on arXiv.org, is created when gas inside the supergiant meets the hot surface of its inner neutron star.