In the most desolate regions of the globe, astronomers and engineers are building a new generation of super telescopes. The high-tech structures will be spread across several continents and be so sophisticated that they can register molecules and atoms several light years away.

Square Kilometre array, The SKA telescope is so huge that it will span five continents.

Made up of 492 smaller, hexagonal mirrors, the primary mirror will have an area of 663 m2.. According to plan, the TMT will function as an allround telescope, which will study a broad range of astronomical phenomena. For instance, the TMT will be equipped with instruments for the observation of the heavenly bodies, which orbit at the outer edge of our Solar System.
The telescope will also be aimed at the Solar System’s well-known planets and moons, allowing astronomers to learn more about the make-up of their surfaces and atmospheres.
The 2,300-t-heavy telescope is built by American and Canadian universities in cooperation with astronomy organisations from Japan, China, and India, among others. The construction work is planned to begin in April 2014, allowing the huge telescope to detect the first starlight in 2021.
Using a supercomputer, astronomers will continuously compare the same region of the sky shot at different times to find out, whether certain heavenly bodies move fast across the sky, or whether brand new objects – such as supernovas – appear.
When the telescope has been operational for 10 years, scientists from all over the world will get acces to a huge database of the 20 billion heavenly bodies, whose light the telescope will detect. Based on all this data, scientists can produce 3D maps of the universe and hopefully learn more about dark matter and dark energy.
Manufacturing the mirrors is rather difficult, as they should be polished with such accuracy that the biggest rough spots could only stand out 1 cm, if the mirror were the size of the United States. Each of the seven mirrors has a diameter of 8.4 m and takes 14 months to make. In 2019, the first four mirrors will be ready to be mounted on the GMT, and immediately afterwards, the telescope can begin taking photographs of the sky. The seventh and last mirror will not be mounted until 2023. 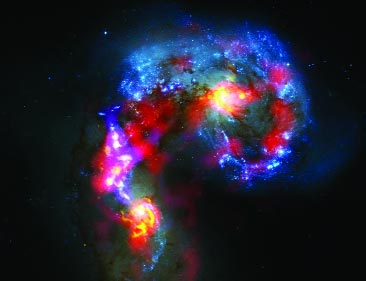 Dense, cold gas clouds can be seen in this, the so far best submillimeter wavelength image of the Antennae Galaxies.

The telescope will have a mirror with an area of 978 m2 and will be able to collect 15 times as much light as the best existing telescopes. The amount of light captured will be 100 million times more than what can be detected by the human eye.
Such a huge mirror cannot be made in one piece, and thus, the giant mirror will consist of 798 smaller, hexagonal segments, each measuring 145 cm across. The light reflected by the primary mirror will be sent to cameras and other sophisticated measuring instruments via four smaller mirrors. The measuring instruments can be exchanged as required – depending on what scientists wish to study.
Initially, the E-ELT will be equipped with a camera, which can record images in near infrared light, and a spectrograph, which sorts out the light from remote heavenly bodies by wavelength. This information can help astronomers identify atoms and mole-cules in space, allowing them to for instance map out the make-up of the atmosphere of an exoplanet. Scientists hope that the telescope will register so-called biomarkers – molecules indicating life on other planets.
The headquarters will be located at the Jodrell Bank Observatory in England, and radio receivers will be spread across Australia, New Zealand, and 9 African countries. The organisation behind SKA includes scientific academies and observatories in 10 countries such as Canada and China.
More than 12 billion years ago, the star factories were operating at full capacity. Huge galaxies shining like 40,000 billion Suns had already been positioned in the one billion- year-old universe. Every single day, 4,000 new stars were added to the galaxies.
The above information comes from the ALMA telescope, which was inaugurated earlier this year in the Chajnantor Plateau in Chile. ALMA is the most recent of a series of super telescopes, which bring the sky down to Earth, and it has provided astronomers with new information as to what some of the universe’s first galaxies looked like. The tele-scope has also been aimed at the centre of our own galaxy, so scientists now know that new stars can originate very close to the huge black hole which is found there. Moreover, astronomers have already come closer to an explanation of how millimetre-small dust particles can collect into planets around the stars.
Without a telescope like ALMA, astronomers would never have obtained this new knowledge. And scientists can now look forward to the coming years, when even more giant super telescopes will be introduced with the aim of disclosing the many well-guarded secrets of the universe.
Three optical telescopes with mirrors with diameters of up to 39 m are already being built high up in the mountains of Chile and Hawaii. The huge mirrors are necessary, if astronomers are to capture the very weak light, which reaches Earth from the remotest objects of the universe or from the countless planets, which orbit other stars than the Sun – the so-called exoplanets. 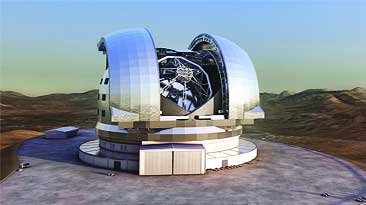 European Extremely Large Telescope, In the middle of the bone-dry Atacama Desert of Chile, ESO is building a giant telescope, which is to outperform all existing ones.

Telescopes to look for life

The attractive exoplanets are one of the most important targets of the future giant telescopes named the European Extremely Large Telescope (E-ELT), the Thirty Metre Telescope (TMT), and the Giant Magellan Telescope (GMT).
The million-dollar astronomical question is whether habitable planets exist in the universe – planets of a particular size, temperature, and atmosphere, allowing for biological life. Analysis of the light reflected by exoplanets can tell astrophysicists the content of their atmospheres – and perhaps even reveal signs of biological activity.
Apart from visible light, the telescopes will also detect infrared radiation, which is necessary to be able to observe very remote heavenly bodies, that shone in the early universe. Since then, the universe has expanded, meaning that the wavelength of light has become longer, and that the visible light of the past has now been converted into infrared light. By means of special infrared cameras on the telescopes, astronomers can obtain information about the development of the universe over billions of years by analysing the wavelengths. This information will be particularly valuable to theoretical physicists trying to develop a theory concerning the dark energy, which causes the accelerating expansion.
Not only is the universe expanding, space is also full of a type of matter, which is not like the well-known matter of stars and planets. The so-called dark matter does not emit light or other types of radiation, but astronomers can observe that the mass of dark matter affects ordinary matter through gravity. The new telescopes will be able to tell, how this unusual matter is distributed across the universe, making it easier for astronomers to find out what dark matter really consists of.
The location of all the telescopes plays a very important role – and it is no coincidence that the biggest and most important ones are located in dry, deserted regions like the Atacama Desert of Chile. There, there are hardly any clouds to disturb the view of space, and the observations are not distrurbed by the light of nearby cities either.

The higher, the better,

Astronomers would like to study the sky above both the Northern and Southern Hemispheres, and thus, they need giant telescopes in other places than Chile. Hawaii and the Canary Islands are other popular regions. As the telescopes are built high up in the mountains, scientists hope to avoid atmospheric disturbances. The higher above sea level the telescope is located, the smaller the distance which the light from the heavenly bodies needs to travel through the different air layers, which can make the images unclear.
Unlike telescopes on Earth, space telescopes do not have this problem, but nevertheless, scientists can only launch telescopes of a limited size into space. Moreover, Earth-based telescopes can relatively easily be upgraded with new, sophisticated instruments, as technological advances gradually allow the extraction of new information from the weak light, which the telescopes’ mirrors detect from out there in the universe. 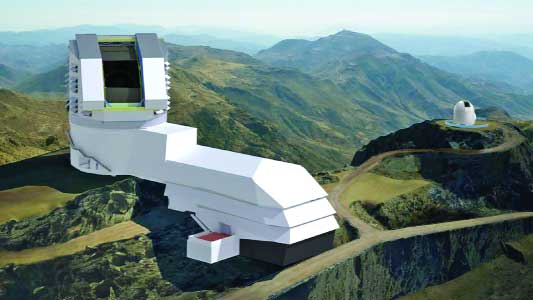 ALMA will be outdated

The ALMA radio telescope proves that the future telescopes are highly ambitious. It consists of no fewer than 66 big, movable satellite dishes – 54 with a 12 m diameter and 12 with a 7 m diameter. By means of a technology called interferometry, the signals from the many dishes are combined in such a way, that they function like one giant radio telescope.
In spite of its ground-breaking technology, ALMA will already be out-classed in a few years by a much bigger and more sensitive radio telescope: the Square Kilometre Array (SKA), which will be built in deserted desert regions of Australia and South Africa, where the signals will not be disturbed by manmade signals from mobile phones, television, and radios.
Around 3,000 large satellite dishes and millions of more simple antennas – all connected via optical fibre – will have a combined area of 1,000,000 m2. The extremely large radio telescope will study the universe’s first galaxies, and astronomers will learn more about the formation of stars and planets plus more exotic phenomena such as dark holes and pulsars.
All in all, astronomers can look forward to a whole new generation of super telescopes, which will be much bigger than the existing ones. If everything goes according to plan, 3 giant optical telescopes and 1 radio telescope of incredible dimensions will be ready to detect the weak signals from space in 10 years. And perhaps we will then learn that we are not alone in the universe.