Exhibition Beyond the Shape 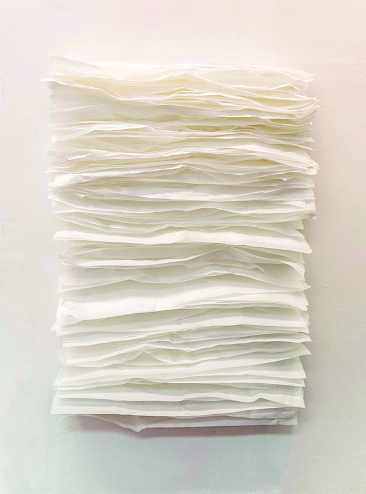 Ana Crespo, The water. Unity and multiplicity. The pearl, in Arabic al-durr means essence. When the Pearl is liquefied it produces primeval water which is pure light. Installation view. 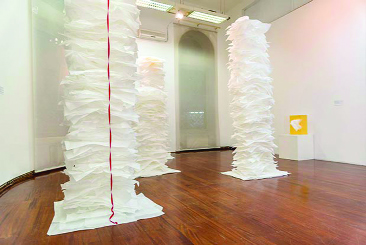 Ana Crespo, Taj Mahal’s. The Taj Mahal alludes to a lucid inner time and a space of mind. Installation view. 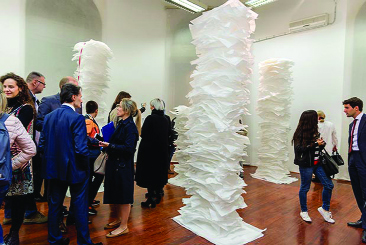 Visitors at the opening of the exhibition

Two artists, Meliha Tepari? from Bosnia and Ana Crespo from Spain, collaborated on an exhibition that is on view at the National Gallery of Bosnia and Herzegovina.
The exhibition was opened by His Excellency José María Valdemoro Giménez, The Ambassador of Spain and Dr. Rosana Ratkov?i?, the curator of the exhibition. Although both artists have created individual installations, it is best to see this exhibition as a one, since the works both symbolically and visually match and complement each other. In both cases, inspiration has been sought in Islamic spirituality, in the texts of Sufi literature and symbolism.
Meliha Tepari?’s installation Seven Silk Curtains consists of seven large white silk curtains, which in its layout contain the shape of God’s name, Allah, while the number seven has a deep spiritual and religious symbolism that is often encountered in Islam. The dynamics of the installation is even more accentuated by the flow of air that moves silk curtains while the noise of the sea is heard in the background.
Tepari? explains that a collaborative exhibition with Spanish artist Ana Crespo “is a spontaneous dialogue, which took place with less verbal communication, and more communication at a sensible intuitive, spiritual and artistic level. My work, the installation Seven Silk Curtains, was initially a reaction to Anne’s paper sculptures, and it still is, but in her development phase, I am continuing my previous work with an abstract geometric, calligraphic language. The idea of a labyrinth, based on calligraphic forms, originally relayed in the glass sculpture Labyrinth of Love (2007), has now assumed one of the possible realizations as initially conceived as an interaction with the audience, while on the other hand, the layout of the labyrinth stems from the existing painting Divine Meander (2007).”
Ana Crespo’s installation consists of airy and light vertical sculptures. The white sheets of paper, in various sizes, combine sophisticated expression of spirituality and immaterial. This is completely in line with the references to the Sufi tradition that the artist relies on as part of her inspiration. Formally, Crespo’s artworks are minimalistic, conveying as much as possible with minimal approach in the performance and experience, without the remnant of any kind of extravagance. The idea of these artworks overcomes its material existence. In a way, we are connecting to the artworks more on a mental than a visual level, and that is the achieved goal.
Crespo tells us that between the two artists “there is a resonance of meanings and intentions, which we mutually perceive instantly. They are two totally different formal languages, but a common intention is translucent. Precisely the difference in language allows us to perceive more nuances of meanings. It is explained in Sufi tradition that form is the depository of the Archetype or Treasure of Light, and also, through form, this Treasure is tasted and savoured. By virtue of it the form is appreciated and delicately cared for, but the form is also the veil that confuses and distracts. The form by virtue of its flexibility is receptive to receiving the Matrix and is a matrix itself. Between form and non-form flows the creative Source of Life. Beyond the shapes is the dialogue of two women artists, from Bosnia and Spain, two ancient cultures with a memory linked to openness and inclusiveness.”
Both concepts are based on white colour, which in Islamic culture symbolizes spirituality, sinless and transcended existence. It is interesting to see that both artists are very skilful and aesthetically impressive, from two-dimensional papers that are forming three-dimensional installations by Crespo, or the depth of space within which the observer can move in case of Tepari?’s installation. Both have successfully completed the initial thought about the synthesis of the idea and material, i.e. the concept and realization itself, which is the highest quality of these works. 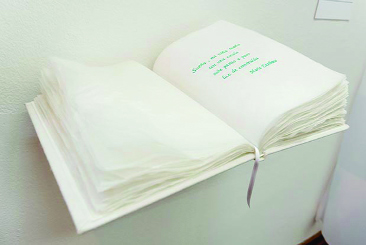 The exhibition Beyond the Shape opened at the National Gallery on October 4, 2018.