Influence of Genes on Academic Achievement

Children differ widely in how well they do at school. In recent years, researchers have shown that around two-thirds of differences in school achievement can be explained by differences in children’s genes.

Genes have been shown to influence how well children do at primary school, at the end of compulsory education, and even in different subjects.

But less is known about how genetic and environmental factors contribute to how well a child continues to do academically throughout their time at school.

To study this, we used a sample of more than 6,000 pairs of twins who are part of the UK-representative Twins Early Development Study and analysed their test scores from primary school to the end of compulsory education. Our new research found that the twins’ educational achievement was remarkably stable: children who do well in primary school also tend to perform well in GCSE exams, which are taken at the end of compulsory education.

By studying twins, researchers could establish how much of academic achievement was down to genetic factors

in educational achievement – when grades in a standardised test remain similar between primary and secondary school. We found that about 70% of the stability in achievement is explained by genetic factors, while 25% is accounted for by the twins’ shared environment, such as growing up in the same family and attending the same school. The remaining 5% was explained by their non-shared environment, such as different friends or different teachers.

When there was a change in educational achievement – where grades increased or dropped between primary and secondary school – we found this was largely explained by those environmental factors that are not shared by twins.

It’s reasonable to assume that this substantial influence of genes on the continuity of children’s achievement during their time at school can be explained by intelligence. But we found the influence of genes remained substantial – at 60% – even after accounting for intelligence, which was measured using several verbal and nonverbal tests taken by the twins over the course of childhood and adolescence.

While twin study estimates such as this can tell us about traits within large groups of people, recent scientific advances are revealing more about the influence of genes on the individual. There has been considerable recent success in identifying genetric variants associated with educational attainmentthrough what are called genome-wide association studies (GWAS). These studies pinpoint genetic markers associated with certain traits. However, each genetic marker explains a very small proportion (less than 0.1%) of the individual differences in school performance.

A more powerful method was recently developed that sums up thousands of the genetic markers found in the GWAS studies to instead calculate a genome-wide ‘polygenic score’. This score is now being used, with increasing levels of accuracy, to predict variance in a trait – such as school achievement – for people unrelated to each other. 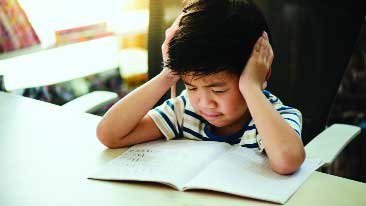 In the future, researchers say that genetics could be used to identify and help children with learning difficulties earlier

As part of our new study, we used data from previous GWAS analyses to create a polygenic score for education attainment. We calculated a score for one of each pair of our 6,000 sets of twins (so that everybody in this part of the study was unrelated). This predicted whether they would do well across their time at school. These predictions ranged from accounting for 4% of the variance in educational attainment at the start of primary school, to 10% of the variance at GCSE levels. Our findings confirmed the results from the first part of our twins analysis – that the same genetic variants play a role in explaining why children differ in achievement at every stage in development.

Our findings, which suggest that genes influence how well a child will do across the length of their time at school, should provide additional motivation to identify children in need of interventions as early as possible, as problems are likely to remain throughout the school years.

In the future, polygenic score prediction, together with the prediction of environmental risks – such as exposure to certain neighbourhoods, family, and school characteristics – might provide a tool to identify children with educational problems very early in life. They could then be provided with individualised learning programmes.

For example, we could use DNA tests at birth to identify children at genetic risk for developing reading problems and give them early intervention. As preventive interventions have greater chances of succeeding early in life, a great strength of polygenic scores is that they can predict at birth just as well as later in life, which could be of particular help for those children who are likely to struggle the most.

The feature is written by Kaili Rimfeld and Margherita Malanchini