Drinking from the Air

All air, from arid deserts to humid cities, contains water vapour – globally, an estimated 3,100 cubic miles (12,900 cubic kilometres) of water is suspended as humidity in the air around us. That’s more than all the water in Lake Superior, the largest lake in North America (11,600 cubic km), or five Lake Victoria’s (Africa’s great lake, at 2,700 cubic km). Or a whopping 418 times the volume of Loch Ness.

But we’re not talking about clouds. This is the humidity in the air we breathe, that reappears as beads of water on the side of a cold drink, or as morning dew on blades of grass. And a technological race is underway to harvest it as drinking water. If the emerging ‘water from air’ (WFA) devices can crack it, it could go a long way towards solving the world’s freshwater problem.

By 2025, two-thirds of the world’s (rapidly growing) population are projected to be living in conditions of severe water stress. Already, 2.1 billion people live without clean drinking water. The world’s poorest are being overcharged for water they know to be unsafe, but have no other option but to drink. Contaminated drinking water causes half a million deaths from diarrhoea each year. While in richer countries – which consume more water than poorer nations, due to intensive agriculture and industry – water from underground aquafers and river basins are being depleted faster than they are being replenished.

On top of that, there is also a trust issue, as citizens doubt the quality of water the authorities tell them is safe. In the city of Flint, Michigan, tap water has been found to include radioactive materials, arsenic and lead. Middle class consumers are turning to bottled water instead. The global bottled water market has grown by 10% every year since 2013, reaching 391 billion litres sold in 2017 (that’s more than 150,000 Olympic-sized swimming pools).

A viable, off-grid source of freshwater is both desperately needed to reduce sickness and poverty, and highly attractive to richer consumers, too.

Pulling water from thin air is hardly a novel concept – you may have a dehumidifier machine at home that does just that. But the water it captures is not clean, doesn’t contain the minerals we need, and the energy required is not realistic to meet a household’s water requirements, let alone a community’s. 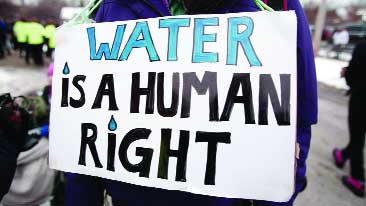 There are several companies, however, adapting dehumidifier technology for drinking water. Mechanical dehumidifiers contain chilled metal coils filled with a refrigerant gas, much like a kitchen fridge-freezer, which create an artificial ‘dew-point’ (the temperature at which water vapour in the air saturates, turning from a gas into a liquid, like the beads on the side of your ice-cold drink). Water vapour entering a WFA machine condenses on a chilled coil in the same way, but once collected it is filtered, sterilised by UV light, mineralised, and stored in a food-grade tank ready to drink.

Roland Wahlgren, a Canadian water consultant, keeps an updated directory of the latest WFA innovations on his website Atmoswater.com. Of the 71 active companies on his database, 64 are focused on mechanical refrigeration, making it the dominant technology on the market. Wahlgren estimates that the typical energy consumption is around 0.4 kilowatt hours per litre (which costs 5.2 US cents, at current US electricity prices).

Consider the South African firm Water from Air, which makes a WFA water cooler for homes that is capable of producing 32 litres of water a day. The advantage over traditional water coolers being you don’t need to constantly replace the plastic water barrels – this one keeps replenishing itself from, well, thin air. Or Indian company WaterMaker, which sells a range from small units to large truck-sized models “ideal for villages [and] gated communities”.

There are, however, some important conditions for many of these devices to function at their best. The efficiency, for instance, often depends on the relative humidity – the amount of water present in air, as a percentage of the amount needed to reach saturation. For most of the devices, that figure is above 60% for optimal functioning, which is fine if you live in Costa Rica, where humidity is often 90% or more, but not so fine if you live in Iran, where it can drop to 17%. But a new UK company, Requench, is entering the market later this year (2018) with a unit literally the size of a shipping container, and it can reportedly function at a relative humidity of just 15%. The prototype produces 2,000 litres a day in humid conditions and no less than 500 litres even in dry climates.

Another solution may come from entirely different WFA technology. Instead of refrigeration coils, a ‘desiccant’ material absorbs water from the air like a chemical sponge, needing no energy to do so. Such technology has only recently emerged from R&D into commercial products, says Wahlgren: “Desiccant systems can be made of less expensive materials so the price point for the same water production capacity has the potential for being lower… [and can] work with lower humidity than mechanical dehumidifiers.”

Zero Mass Water was founded by Cody Friesen, associate professor of materials science at Arizona State University, in 2014. His product, Source, uses a desiccant inside a small rooftop solar panel he calls a ‘hydropanel’.

“Our desiccant was developed inside my research group at Arizona State University”, explains Friesen, whose childhood in the Arizona desert gave him a natural affinity for water preservation. “You need something that absorbs water at ultra-low humidity, even 5% humidity. For example, when you leave the lid off the sugar bowl, it gets kinda clumpy. Sugar is a natural desiccant, but it does that really slowly. Now imagine an engineered material that does that very fast.”

His material is a trade secret, but he can say it includes a mixture of lithium chloride and organic ions. The solar panel itself contains some photovoltaic material, which runs a small fan to pull air through the system, but it is largely solar thermal – this evaporates the water back out of the ‘chemical sponge’ in order to be condensed and collected. It doesn’t need a chilled coil to condense because it can use the outside ‘ambient’ temperature, which is cooler than the heat inside the solar thermal.

Starting from $4,000 (around £3,100), Source produces an average 3-5 litres per day, far fewer than the mechanical refrigerants. But it is much less energy intensive, requiring only 100 watts of off-grid solar power (compared to say the Water From Air water cooler, which needs 500W of mains power and humidity levels of 80-95% to produces 25-30 litres-a-day). Designed to look good as well as do good, Friesen wants Source to appeal to those consumers already spending hundreds of dollars a year on bottled water. “Half a trillion litres of bottled water are sold globally every year. Let that number sink in”, he says. “The carbon footprint associated with that, the plastic footprint, is just massive”.

After five years of ownership, the average price per litre from Source is around 16 cents, replacing some 30,000 500ml plastic bottles. Its biggest buyers so far have been rural homesteads in US and Australia, but it has also sold to schools in Mexico, an orphanage in Lebanon and a fire station in Puerto Rico. (Following the 2017 hurricane, one fireman told Friesen, “After the military goes away… the only potable water we’ll have is gonna be this.”)

But there is one more WFA approach that requires zero electricity – solar or otherwise – and is designed for the poorest regions of the world. In rural Ethiopia, Togo, and soon Haiti, stands the near 10-metre tall ‘Warka Tower’. Looking like something from Glastonbury Festival, a giant vase-shaped bamboo frame supports hundreds of square metres of fine polyester mesh. The mesh collects the morning mist and drips down into an underground tank via a stone-based filtration system. The Italian architect behind it, Arturo Vittori, got the idea when designing a moon base for NASA. “When you design for such an extreme environment as outer space you have to bring water from Earth and then recycle and reuse the water in a closed system”, explains Vittori. “The same thing happens on planet Earth – the water cycle does this naturally for us.” 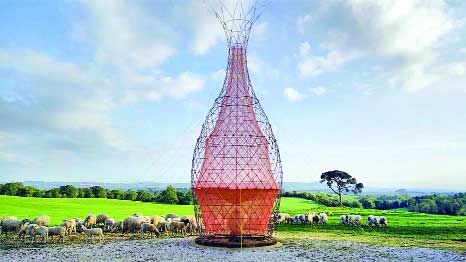 The first Warka Tower was erected in Ethiopia in 2015. When the seasonal fogs come, the tower produces water constantly. “But even when there is no rain and no fog, nightly condensation still happens”, says Vittori. “The capacity of [our] water tank ranges from 1,600 litres up to 100,000 litres.” The tower was built by local villagers using traditional methods and bamboo, a local material. “Now in Haiti and Togo, we are experimenting with [other] local materials… including palm leaves.” The Warka Tower is “a different approach” to WFA, he says: “it is understanding the local traditions and materials … It is much more than a machine delivered on the back of a truck. It is zero energy, there are no mechanical parts, everything is by gravity, by air, by wind.”

Such dew harvesting, however, relies on very high humidity and fog. Wahlgren argues that this approach – also known as “radiative cooling” – is “extremely site specific… there are only a limited number of sites on Earth that are suitable”. For those limited sites, the Warka approach is admirable – it is easy to maintain, using the same local skills and materials used to put it up. Vittori hopes that local craftsmen will go on to build more in surrounding towns and villages without his input. But if the end goal is to serve the 2.1 billion people without access to clean water, then Warka Towers could never be a solution on their own.

Vittori estimates a single (smaller) tower meets the water needs of around 50 people, for an upfront construction cost from $3,000 (for a 5m tower). A larger, 25m tall tower, would cost $30,000 and could supply roughly 250 people (though clearly that would involve a significant change to the landscape). On the driest nights, the Tower adds no water to the tank below. Refrigerants and desiccants, meanwhile, can constantly harvest water at a much greater volume – they may not be zero energy, but solar solutions such as Zero Mass Water’s can be energy-neutral and off-grid. They could be major freshwater providers in the near future.

And there may be many more innovations to come. The international XPRIZE innovation competition – that in previous years has encompassed AI and suborbital spaceflight – is currently offering $1.75m (roughly £1.4) for the best new invention to “harvest fresh water from thin air”. There are even suggestions that WFA could be scaled up to the size of desalination plants, or solar farms.

Could fields of WFA have a downside? Could it affect local rainfall and cloud formation? Speaking to me from Arizona, Friesen laughs. Even if every single person owned a WFA device, he says, it wouldn’t even use up all the water vapour that comes from traffic fumes, “so we don’t have a problem of coming anywhere close to impacting weather systems”. Maybe re-wired fridges, chemical sponges and giant bamboo towers collecting water from air seem strange now. But our current groundwater system is failing, and we need new solutions.