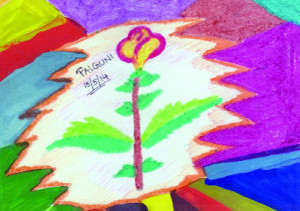 “Oh, please, give me some more colors, PLEASE!” Mr. Roset cried out as loud as he could but Sarina gave him a cold shoulder. After all, Mr. Roset was nothing but an incomplete hand-drawn rose lying in a plastic folder. To her, he was just a piece of trash.
“Why, you unlucky little fellow! I ran out of paint while trying to complete you. You’ve got to stay in prison now!” Sarina shunned at the poor rose whenever he looked up at her with pleading eyes.
Ten year old Sarina sat near an open window. Her English homework lied unattended on her lap. The spring breeze played with her curly hair. Her chubby little fingers held an idle Linc Ocean gel pen.
“Sarina, I came out of your mind, just to be with you. Please help me live now.” Mr. Roset whispered to the little girl again. Sarina’s black eyes formed an angry glare:
“Why can’t you just sit quietly, you silly old thing!”Sarina slapped him hard on the face. “I have to learn the correct usage of prepositions now, I’m not in the mood to just sit back and color!”
MrRoset lay shivering in his empty frame. The colorless frame felt cold under his bare petals. The pencil lines holding him came closer together, making him feel a bit warmer than before.
After a few hours, Mr. Roset managed to stand up on his feeble branch.  His zigzag frame was surrounded by many different pencil patterns. Sarina always used such backgrounds whenever she drew anything single on a white paper.
“Dear background of the south end, would you please share some of your colors with me?” Mr. Roset groaned.
Mint Green always admired Mr. Roset. Despite being a little weak, he never lost hope.
“Ask Vermilion to share his color with you, Mr. Roset.” Mint Green suggested in a soothing voice.
Only the south end of Mr. Rosets background was painted with various shades of Poster Colors. All the paints in Sarina’s collection were on their deathbeds when the little girl drew him on an abandoned piece of paper. All the paint bottles breathed their last one by one as soon as Sarina began coloring Mr. Roset’s background.
“You unlucky one! You’ll remain in prison for the rest of your life! You’ve made my Poster Colors die! You’ll have to remain incomplete forever!” Sarina cursed as she slid her creation into a hard plastic folder.
Vermilion really wished he could share at least a few drops of his color with his friend. Unfortunately, a pair of cockroaches ate him up partially. He could never share his color with his friend Mr. Roset, even if he wanted to.
“Buddy Roset, have patience. Someday, Sarina will surely give you the colors you need so badly.” Vermillion spoke cheerfully, hoping to ease the pain his friend was going through.
Warm tears streamed down Roset’s leaves. He had been waiting patiently in his plastic prison for almost two years now. His pencil outline became faint with time. His leaves almost disappeared, and his branch became rickety. If Sarina filled him with colors, he would be much stronger.
Roset’s family resided inside one of Sarina’s personal drawers. She had given them a good shape before creating him. His wife, Mrs. Roset, had a slender figure drawn out of a dark brown pencil crayon. His daughters, Rosetta, Rosy and Rosebell, filled his life with joy. Rosetta had a brown figure like her mother. Rosy and Rosetta were healthy twins, with bodies of green gel ink.
They lived inside an eye-catching background of dark blue, yellow and pale green, made out of Oil Pastel shades. Mr. Roset had only seen his family thrice before being imprisoned.
“Yes! Roset, I’m done with my English homework, finally!” Sarina jumped with joy as she filled the last gap with the last preposition and put her exercise book aside.
Just then, Sarina noticed the faint pencil lines of Mr. Roset’s body.
“Roset, I’m sorry, I was being too cruel with you. You were right, you came out of my mind, and I’ll let you live.” She declared, taking Roset out of his confinement.
Sarina took out her best box of Oil Pastels and began filling in Roset’s transparent body. She gave him bright red and yellow petals. The upper portion of his main leaves got a sweet tint of pale green. The lowers of main leaves, along with other smaller leaves received a nice shade of dark green. Roset’s branch got a beautiful shade of dark brown. Roset could stand upright in his frame now. Sarina filled his background with the best shades of her oil pastel collection. Afterwards, she gave him a good laminated cover. As she put him in the same drawer with his family, Vermilion whispered:
“You see, buddy, the fruit of patience is always sweet.”