Boeing, Bermuda and the Back of Beyond 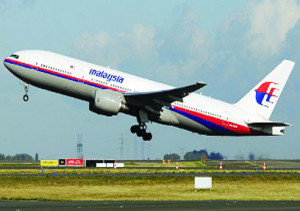 The Boeing 777-200 jet’s passengers on the 2,746-mile journey totalled 239. There were 14 different nationalities on board. According to Malaysian Air Traffic Control Authority the plane lost all contacts within less than an hour it took off. Mysteriously no distress call was received from the aircraft. At around 1.07 AM the plane sent its last ACARS transmission. For your information, ACARS is a service that allows computer of an aircraft to talk with the ground computer. The service maintains regular contact with the ground computer at a regular interval. Therefore it was supposed to send its next transmission at 1.37 AM which never took place.  12 minutes later the above good morning message was received believed to be sent by a co-pilot. A few minutes later the plane’s transponder which maintain communication with ground radar was shut down. At around 1.21 AM the plane was supposed to enter the Vietnamese Air space at 1.21 but the authority at Vietnam informed that it failed to contact with air traffic control in Ho Chi Minh City. The plane was supposed to continue its journey towards Beijing through South China Sea. Interestingly Malaysian military radarplotted Flight MH370 at a point south of Phuket Island in the Strait of Malacca, west of its last known location. Thai military radar logs also confirmed that the plane turned west and then north over the Andaman Sea. Thus vanished in the thin air.

The biggest search party
The missing of MH-370 instigate biggest search party in the known human history. Nearly 100,000 square Miles of area came under searching sight. The plane’s planned route would have taken it north-eastwards, over Cambodia and Vietnam, and the initial search focused on the South China Sea, south of Vietnam’s Ca Mau peninsula.
But evidence from a military radar, revealed later, suggested the plane had suddenly changed from its northerly course to head west. So the search, involving dozens of ships and planes, then switched to the sea west of Malaysia.
Further evidence revealed on Saturday 15 March by the Malaysian Prime Minister Najib Razak suggested the jet was deliberately diverted by someone on board about an hour after take-off.
After MH370’s last communication with a satellite was disclosed, a week after the plane’s disappearance, the search was expanded dramatically to nearly three million square miles, from Kazakhstan in the north to vast areas of the remote southern Indian Ocean.
Then, on 20 March, Australian search teams revealed they were investigating two objects spotted on satellite images in the southern Indian Ocean and sent long-range surveillance planes to the area, followed by further sightings. An Australian ship arrived in the area and further vessels are on their way.
At 1400 GMT on 24 March the Malaysian prime minister announced that following further analysis of satellite data it was beyond doubt that the plane had gone down in this part of the ocean.
This was based on Inmarsat and UK air accident investigators’ analysis of the data relayed between the plane and ground station by satellite.
More potential debris was spotted by satellites but on 28 March the main search area was moved 1,100km (684 miles) to the north-east and closer to Australia, following further analysis of the speed of the plane and its maximum range.

Suspected Passengers
What happened with the MH 370 has become subject of a wide range of speculations. One of them is it was a subversives act of terrorist on board. Two passengers travelling with fake passport fuelled this speculation. Luigi Maraldi, 37, was named as one of the people on board flight MH370 – but his parents have confirmed he is alive and well in Thailand. Mr. Maraldi is an Italian. Two Iranian men were found to be travelling on false passports. But further investigation revealed 19-year-old Pouria Nour Mohammad Mehrdad and Delavar Seyed Mohammadreza, 29 were headed for Europe via Beijing, and had no apparent links to terrorist groups.
It was also speculated that as 136 passengers out of 239 was from China and many of whom was of high official rank separatist of China’s troubled province Xinxiang may be responsible for the plane’s demise. The ethnic minorities also say they face being marginalised in their homeland after an influx of China’s Han ethnic majority.The Uighurs now make up 45% of the population in Xinjiang.

The pilot committed suicide!
As the possibility of finding any trace of MH370 began to fade the authority in order to save their back had come out with a bizarre claim that the pilot of the plane may have committed suicide as he recently was divorced and was going through rough patch in life. Captain Zaharie Ahmad Shah may have committed suicide was suggested by an Indian expert. He said on 26th March that the tragedy of Malaysian Airlines MH370 has a similarity with two other air tragedies in which the pilots committed suicide by plunging the planes into a river and into the sea.Indonesia’s SilkAir flight MI185 killed 104 after the plane plunged into the Musi river in Sumatra on Aug. 25, 1999. Indonesia said “unlawful human intervention” may have been a factor in its crash, a theory confirmed by U.S. investigators.
On Oct. 31, 2009, EgyptAir flight 990 crashed into the Atlantic Ocean when the pilot deliberately flew the aircraft into the sea, killing all 217 on board, according to U.S. investigators. He said the co-pilot of MH370 might have killed all people on-board by causing depressurisation which would lead to “brain death” within 15 seconds of all in the cabin, while the cockpit had unlimited access to oxygen.
But this claim was rejected as absurd by the daughter of pilot Ahmad who said, Mr Ahmad was a happy and pious man who will never commit suicide.
But so far no evidence has come to light to suggest either captain Zaharie Ahmad Shah or co-pilot Fariq Abdul Hamid had such intentions.
Malaysian police have attempted to investigate whether any passengers or crew on the plane had personal or psychological problems that might shed light on the mystery.
But Hugh Dunleavy, the commercial director of Malaysia Airlines, said the captain in charge of the flight was a very seasoned pilot with an excellent record.

Conspiracy Theories
A range of conspiracy theories is being circulated in the online and social media as what happened with the MH370. These conspiracy theory ranges from US military did to alien abduction theory.

US Military Conspiracy
There are actually several different conspiracy theories ab out the US military being involved. They range from the US military shooting down the airliner, whether on purpose or accidentally, to secretly landing the plane on a military base on the remote island of Diego Garcia.
The United States government flatly denies claims of any US involvement regarding the fate of Malaysia Airlines Flight MH370.
Conspiracy theory and scientific site Natural News, run by Mike Adams, has another US military theory.
Adams said: “If we never find the debris, it means some entirely new, mysterious and powerful force is at work on our planet, which can pluck airplanes out of the sky without leaving behind even a shred of evidence.”

Terrorists Crashed
This is perhaps the second most popular and plausible theory.
Though no terrorist groups have claimed responsibility for the missing flight, that hasn’t stopped theorists claiming it’s the only explanation. There are some terrorist groups that have claimed responsibility over the last few days, including an unknown Chinese group.

Afghan Hijacking
A Russian newspaper claimed MH370 has been hijacked and flown to Afghanistan, where the crew and passengers are now being held captive.
A military source reportedly told the Moskovsky Komsomolets newspaper: “Flight MH370 Malaysia Airlines missing on March 8 with 239 passengers was hijacked.

A Life Insurance Scam
The Malaysian police chief refused to rule out the possibility of the missing plane being an elaborate insurance scam.
Khalid Abu Bakar addressed the world last month to provide an update on the investigation and revealed authorities were exploring every single avenue – no matter how remote.
“Maybe somebody on the flight has bought a huge sum of insurance, who wants family to gain from it or somebody who has owed somebody so much money, you know, we are looking at all possibilities,” he said.

Edward Snowden
Some believe whistleblower Edward Snowden could be central to the disappearance.
There were early suggestions 20 employees from the Texas-based Freescale Semiconductor were on board the flight.

An experiment
A theory suggesting the plane was hidden as part of an experiment has circulated.Beforeitsnews.com reported: “It is conceivable that the Malaysia Airlines Flight MH370 plane is ‘cloaked’, hiding with hi-tech electronic warfare weaponry that exists and is used.

New Bermuda Triangle
The idea there could be a second Bermuda Triangle seems a popular one on social media.Its sudden and unexplained disappearance from radar could have several explanations, whether it be a sudden explosion or mid-air disintegration, or even a mechanical failure. But some theorists believe it simply means the plane has entered another Devil’s Triangle.
Boats and planes have been known to disappear in the patch of sea in the North Atlantic Ocean, known as the Bermuda Triangle, including Flight 19 in 1945, when five torpedo bombers mysteriously vanished.
But could there really be another one?

Went to another dimension
String theory has gained ground in the scientific community. According to string theory atoms are made of vibrating strings. These strings does not always stay at the same place all the time.  Therefore atom as well human being which is made of atom also have different panes of existence. Scientists of string theory claim that there are eleven dimensions of which we can only see four. Our world is three dimensional and time made the forth one.  Some claim that MH370 may have dived in to the other dimension.

Alien Abduction
Social media users have jumped on the possibility of extra-terrestrial life having something to do with the missing plane.
And one user even said there were only two possibilities for its disappearance, aliens or a DB Cooper-style heist.

We have long way to go
We boast that, we are living in the most advanced civilization of the world history. We can peep into the deepest region of the sky and our telescopes can collect data from stars that are million miles light years away from us. We have played golf on the moon. Mars Rover can send its investigation report from the backyard of planet Mars. But we cannot see mere three miles under the sea. We do not know whether the plane has crashed or it has lost in the oblivion forever.