Panda: In the line of Extinction 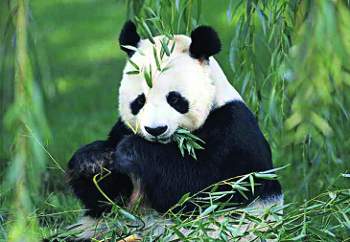 Have you ever seen a Panda? If you had, then you surely are a lucky one because it is almost impossible to find and see Panda in south Asia, it is only found in China. Although some countries tried to keep them in their zoo, but most of them failed. According to a report, there are about 1590 pandas living in the wild around China, mostly in southwestern and Northern provinces.

Anyone can easily identify a panda because of its large, distinctive black patches around the eyes, over the ears and across its round body. Bamboo is their staple food! But they also eat bananas, eggs, fishes, oranges etc when available. Although Pandas were living in the lowland area, hundreds of years ago, now they are living in a few mountain ranges in Sichuan, Shaanxi, and Gansu provinces.

Panda has been considered one of the highly endangered species. In a report published in 2007, China has 293 Pandas in captivity and another 27 Pandas are outside the country, mainly in the zoos of Thailand, Hong-Kong and Taiwan. Panda is in extinction because it is loosing its habitat. From the ancient time, they have been a target for poaching. So lots of necessary steps have been taken to prevent Panda from extinction. Scientists are trying hard to breed more pandas artificially. But still there are some threats.

Recently a spokesperson for WWF China says that the Pandas could be extinct in 2 to 3 generations if increased development around the Pandas natural habitat is not controlled. The species program director of WWF, China says mentions that the housing and development for humans are encroaching the natural feeding and breeding grounds of wild pandas. And ultimately it will lead to the extinction of the globally protected species.
Panda’s habitat is being split up into ever smaller patches and this prevents the animals from roaming freely for mating partners.

“If the pandas cannot mate with those from other habitats, it may face extinction within two to three generations” – warns Fan Zhiyong, the director.

Although China government has set up breeding centers for Panda and many pandas have already been born in these centers, the recent news makes them worried again. The scientists urges to the government to control the development. Otherwise, they would have to loose China’s national treasure.