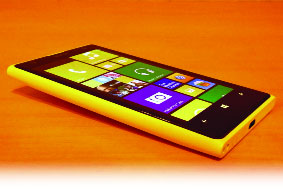 Every modern wireless phone is a cameraphone, but this Lumia is something new: a phonecamera. Its oversized sensor packs 41 megapixels of resolution; you can capture the most detailed phone snapshots you’ve ever seen, and zoom in without reducing your pictures to a blocky mess. (You have to download the high-res versions to a computer via USB cable, but it’s worth the effort.) Even iPhone and Android fans who thought they couldn’t care less about Windows Phones might find themselves smitten with this one.
9.
Leap Motion Controller
This pint-sized USB accessory for Windows PCs and Macs is an $80 preview of where man-machine interfaces may be headed. Plug it in, plop it on a flat surface, and you can perform tasks — from playing games to reading New York Times stories — by waving your hands in the air. It can even detect the angle your palms and how many fingers you’re sticking out. The technology is also being built into laptops, starting with HP’s Envy17 Leap Motion SE.

8.
Nest Protect
Silicon Valley startup Nest Labs specializes in making the most mundane household devices a lot less mundane. In 2012, it introduced a Web-savvy touch-screen thermostat. And its new product is Nest Protect, a $130 smoke and carbon-monoxide detector. Rather than emitting an eardrum-shattering squeal, Protect alerts you to hazards in a calm female voice which says helpful things like “There’s carbon monoxide in the den.” If it mistakes your smokey cooking for a fire, you can set it wise with a wave of your arm.
7.
Amazon Kindle Fire HDX
Amazon’s third-generation Kindle Fire tablets — a $239 seven-inch model and a $379 8.9-incher — are the first ones which felt truly polished and pleasing from the day they debuted. As always, they make it as simple as possible to consume mass quantities of Amazon content — video, music, books, games and more. And they’ve got one feature that’s a ground-breaking dazzler: Mayday, which lets you get tech support from a real live Amazon rep who appears on screen and can take control of your tablet.

6.
Microsoft Xbox One
Officially, Microsoft’s Xbox One is a game console, but its aspirations go far beyond play. With built-in video calls via Skype, integration with cable and satellite TV boxes and an interface derived from Windows 8, it’s really a living-room PC. The most intriguing technology is built into the new Kinect sensor, which understands spoken commands, recognizes faces and can even measure your heart rate. Some aspects of the One are still rough around the edges, but it’s going to be fascinating to see where it goes.

5.
Apple iPhone 5s
iPhones with an “s” at the end of their model numbers are supposedly snoozers, because they focus on refinements to the previous year’s model. But the iPhone 5s introduces two of the best smartphone features which Apple or anyone else has ever come up with. The Touch ID sensor lets unlock your phone with a quick press of your finger or thumb. And the camera sports a unique dual-LED flash which provides subtle, custom lighting for an array of picture-taking scenarios.

4.
Pebble Smartwatch
Whether smartwatches ever turn into a booming business to rival smartphones or tablets remains anyone’s guess. But Pebble is off to a promising start. The $150 wearable gizmo acts as a satellite for your iPhone or Android handset, receiving snippets such as text-message notifications via Bluetooth and displaying them on its power-efficient E Ink display. Third-party developers can write programs to let it do everything from playing games to tracking your fitness. Did we mention that it tells time?

3.
Oculus Rift Development Kit
At the moment, Oculus Rift is only available in a $300 kit aimed at game developers. But once you strap on this virtual-reality headset onto your noggin and experience it in action, you’ll get itchy for the consumer release, which is scheduled for 2014. Used with a PC or Android device, Rift will let games create 3D worlds which surround you — you can even look over your shoulder for enemies lurking behind. If the games live up to the hardware’s potential, it could be an epoch-shifting landmark.
2.
Apple’s new iPads
Do you want a powerful iPad or a portable one?
How about both? At just one pound and .29-inch thick, the 9.7-inch iPad Air is much svelter than previous full-sized models. And except for the smaller screen, the 7.9-inch iPad Mini with Retina has almost exactly the same potent components as its big brother, as well as the same ten-hour battery life.
Both benefit hugely from the App Store’s 475,000 iPad-optimized apps. It’s best tablet you can buy, in two convenient sizes.

1.
Google Chromecast
Instead of trying to do everything — like Google’s famously ambitious and unsuccessful Google TV — this thumb-sized gizmo does one thing, does it as simply as possible and does it for the impulse-purchase price of $35. Plug it into one of your TV’s HDMI ports, and you can fling videos and other content from your laptop, tablet or phone to the big screen, no wires involved. Lots of companies have built devices to do this; Chromecast is the first one that gets it right.