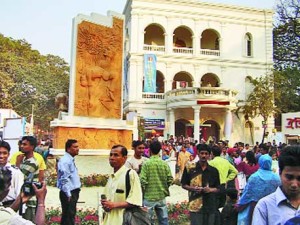 Book fair these days in different countries of the world has turned into one of the most important centers of art, literature and culture. A total picture of literature and culture of a nation largely comes to light through the book fairs it holds.
The Amar Ekushey Book Fair, popularly known as Ekushey Boi Mela, is the national book fair of Bangladesh. It takes place throughout the month of February every year. The fair is organized commemorating those who sacrificed their lives in a procession of Language Movement demanding recognition of Bengali as the state language of the then East Pakistan on February 21 in 1952.
As tribute and gratitude to the language martyrs, the organizing authorities divide entire fair ground into several chattars and name them after language martyrs Rafiq, Salam, Jabbar, Barkat and Shafiur. Moder Gorbo (our pride), a permanent sculpture with the statues of language martyrs, has also been made in the fair premises.
The fair takes a festive look and turns into an event of union with arrival of thousands of people and booklovers everyday. The huge attendance of women and children on the fair premises draw attention of all.
Several hundred book stalls are set up by publishers, book sellers and such other organizations including Bangla Academy and Nazrul Institute. The entire venue of the core event of Bangladeshi literature and culture and its outer area are decorated with banners, festoons and placards in conformity with the spirit of Amar Ekushey. The whole zone of the fair remains free from smoking. It has after all turned into a cultural reunion of Bangladesh where almost all literary figures gather. Sellers offer a discount of 25 percent on all sorts of books to attract readers on the occasion.
The fair is limited only in Bangla Academy’s boundary. The Ministry of Culture is in charge of the fair, while Bangla Academy accomplishes the ground work. Roughly 300 to 400 publishing houses take part in the fair. Only the Bangladeshi booksellers who have at least 25 books of their own can join the fair.
The Nazrul Mancha, a site dedicated to national poet Kazi Nazrul Islam, for month-long cultural meetings, a Lekhok Kunjo for writers and a media center for journalists add more attraction to the fair. However, the authorities are often in great difficulties to accommodate the huge crowd and the increasing number of publishers on the fair ground.
Generally the head of the Bangladesh government inaugurates the book fair on the first day of February, as the fair is considered as the most important and popular cultural function of the country. Different media including public and private television channels broadcast the inaugural ceremony of the fair live.
The authorities declare the Ekushey Padak in this month in several categories for the country’s eminent personalities for their remarkable contributions in different arenas including literature.
A series of competition including essay writing and painting for children and seminar and discussion on contemporary Bangla literature and issues are held everyday during the fair. A distinguished personality present the ‘Amar Ekushey Speech’ on February 21 every year.

Background of Ekushey Boi Mela
Muktodhara Publications started a little sale of books in front of Bangla Academy on the ‘Shaheed Day’ (February 21) in 1970, later International Mother Language Day. Muktodhara proprietor Chittaranjan Saha took the initiative. Later, other book publishers joined there unofficially. In course of time, it became official and the most popular book fair of Bangladesh. Bangla Academy took over the responsibility to organize the fair in 1978. The fair was named as the Amar Ekushey Book Fair in 1984.
Although the Ekushey Boi Mela started its journey as a book fair, it has evolved into a national cultural festival reflecting the cultural spirit of the modern Bengali nation. Alongside book sales, the organizing institute Bangla Academy holds literary and cultural events everyday. Thousands of people gather everyday not only to purchase books but also to spend time in the company of books and their authors with a patriotic zeal. There is no entry fee for the fair. Renowned publishers take year-long preparation to publish a huge number of books during this month. All the people concerned believe that the event is playing a very vital role in the development of Bangla literature and culture and in creation of fresh readers.