Cell phones on the brain 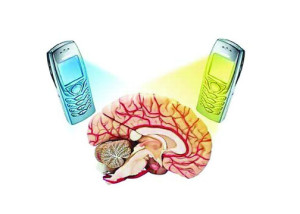 When an active cell phone is pressed against the ear, the brain gets busier.
Here’s one number to keep in mind during your next cell phone conversation: 50. A new experiment shows that spending 50 minutes with an active phone pressed up to the ear increases activity in the brain. This brain activity probably doesn’t make you smarter. When cell phones are on, they emit energy in the form of radiation that could be harmful, especially after years of cell phone usage. Scientists don’t know yet whether cell phones are bad for the brain. Studies like this one are attempting to find out.
“The human brain is sensitive to the electromagnetic radiation that is emitted from cell phones,” Nora Volkow told Science News. Volkow, who worked on a study that found the connection with brain activity, is a researcher and doctor at the National Institute on Drug Abuse in Bethesda, Md.
The radiation emitted by a cell phone is different from the types in X-rays and nuclear power plants. All of these kinds of radiation are energy, but cell phone radiation is not radioactive. So it affects the body, but not by being radioactive.
The 47 participants in the experiment may have looked a little strange. Each one had two Samsung cell phones strapped to his or her head — one on each ear. The phone on the left ear was off. The phone on the right ear played a message for 50 minutes, but the participants couldn’t hear it because the sound was off.
With this set-up, the scientists could be sure they were studying brain activity from the phone itself, and not brain activity due to listening and talking during a conversation. After 50 minutes with two phones strapped to their heads, the participants were given PET scans.
A PET scan is a way to see what’s going on inside the body. It’s like the opposite of an X-Ray: A person is injected with a chemical that produces radiation. That chemical goes to the part of the body that the scientists want to study. There, the radiation acts like light: it’s absorbed in some places, passed on in others, and reflected in others. By studying those patterns, the scientists can see what’s happening inside the body.
The PET scan showed that the left side (the side with the phone turned off) of each participant’s brain hadn’t changed from the way it was before the experiment. The right side of the brain, however, had used more glucose, which is a type of sugar that provides fuel to brain cells. These right-side brain cells were using almost as much glucose as the brain uses when a person is talking. This suggests that the brain cells there were active ? even without the person hearing anything. That activity, the scientists say, was probably triggered by radiation from the phone.
Cell phones do not always emit the same amount of energy. They release different amounts of radiation depending on whether a person is talking or listening, the type of phone, the number of people using phones nearby, and the distance to the nearest cell phone tower. All of these changes make it difficult to collect evidence about any health risks of cell phones, since exposure to radiation can vary.
But Henry Lai, who works at the University of Washington in Seattle, is uncomfortable with the data emerging on cell phones. Holding a cell phone to your ear during a conversation is “not really safe,” Lai told Science News. Lai is a bioengineer at the University of Washington in Seattle. He wrote an article about the study for a journal, but he did not work on the new study. Bioengineers bring together ideas from engineering and biology.
For those who don’t want to wait to find out for sure whether cell phones are bad for the brain, there are ways to talk more safely. You can have short and sweet conversations, use a speakerphone or keep the phone away from your head.
“In my case, I don’t like my brain to be stimulated by anything that is not physiological,” Volkow toldScience News. “There are very easy solutions that don’t cost anything for those who want to play it safe.”