When it comes to Hollywood depictions, few professions are highlighted as frequently as that of educator. More than a decade ago, Education World ranked the top 10, so here’s a fresh look at the best movies about education. In our ranking we considered not just cinematic excellence, but also educational value and whether the viewer could walk away feeling positive about schools. 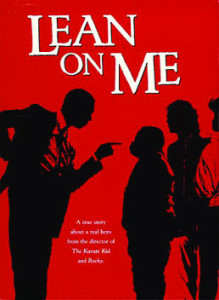 Lean on Me (1989)
Teachers across America were cheering in their seats as Morgan Freeman’s Joe Clark dressed down a group of parents for not doing all they could to ensure their children’s success. “Sit down with your kids and make them study at night,” Clark says. “Give our children some pride! Tell them to get their priorities straight!”
Principals must have envied Clark’s brashness the first time they saw him chide his staff for accepting the status quo. “So forget about the way it used to be,” Clark bellows. “This is not a damn democracy! We are in a state of emergency, and my word is law! There’s only one boss around here, and that’s me.”
For all his shouting and posturing, Clark also shows that he truly cares for his students. We see this when he encourages a female student to be a lawyer and when he challenges Thomas Sams to turn his life around.
“Lean on Me” gets the top spot on our list because it leaves you believing that even the most challenging schools can shine. They don’t need so-called “good educators,” just more Mr. Clarks. 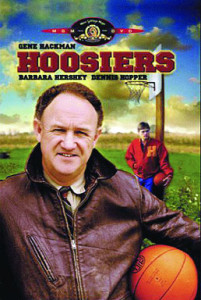 Hoosiers (1986)
A basketball movie for sure, “Hoosiers” is also a look at rural American education. When Gene Hackman’s Norman Dale tells a reporter before a big game that, “My boys only know farming, basketball and school, probably in that order,” he isn’t embellishing. There is so much to love about this film—the underdog story, the redemption of Dennis Hopper’s “Shooter” character, the themes of teamwork and family all rolled into a big slice of Americana. And it actually happened. “Hoosiers” is an inspirational story that can be adapted to any situation. Try telling your students before a big test, “If you put your effort and concentration into playing to your potential, to be the best that you can be, I don’t care what the scoreboard says at the end of the game. In my book, we’re gonna be winners.”

School Ties (1992)
Set in 1950s New England, “School Ties” tells the story of a Jewish football star who quickly becomes the target of racism at his posh prep school. With school climate a current hot topic, “School Ties” remains relevant. The central conflict in the film involves students’ attempt to discover who cheated on a recent test. Tensions run high when it comes down to fingering Brendan Fraser’s Jewish character or Matt Damon’s WASP character. Religious and ethnic differences have been at the center of conflicts for thousands of years, and “School Ties” reminds us how they impact teens in a school setting.

Stand and Deliver (1988)
Admittedly, true stories get preferential treatment on this list, and “Stand and Deliver” is the perfect example. It is not the most entertaining movie, nor does it boast a truly great cast. But “Stand and Deliver” is one of the best movies because of Edward James Olmos’ portrayal of actual East L.A. math teacher Jamie Escalante. Any hack with a pen can get Michelle Pfeiffer to turn a bunch of inner-city youth into Rhodes Scholars, but Escalante did it for real, and Olmos all but channeled him in the film. For a guaranteed “yes,” ask a teacher if she chuckled the first time she saw the “apple scene.” 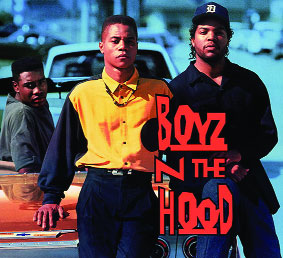 Boyz n the Hood (1991)
For most high schoolers, getting into college is a hugely stressful part of their lives. If you were a teen in south central L.A. in the late 1980s and early 1990s, you also had to worry about drive-bys, drug dealers and racist cops. John Singleton broke new ground when he wrote and directed “Boys n the Hood.” It was the first time Hollywood took a real look at what life was like for kids in that situation. You really are hoping that Ricky Baker overcomes all of the built-in obstacles in his life and lands the football scholarship to USC. Tre Styles’ frustration after another shooting in his neighborhood is palpable as he breaks down in front of his girlfriend. Forget “Dangerous Minds” and “Freedom Writers,” “Boyz n the Hood” is the standard-bearer for inner-city school films.