Do You Have Math Anxiety?

Mental arithmetic can be stressful for many people, causing a lifelong fear of numbers. What makes the brain freeze up when calculating hard sums? David Robson reports.

Sweaty palms, a racing pulse, that choking feeling in the back of my throat: nothing sends fear into my heart like the need to perform maths in public. Even the simple task of splitting a restaurant bill brings me out in a cold sweat. No matter how hard I concentrate, the numbers somehow slide from my mental grasp, and I’m left with a looming shadow in place of the answer. 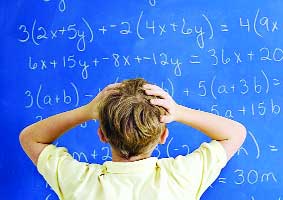 You know those dreams where you suddenly realise that you’ve forgotten all your clothes? That’s what it feels like. My dirty little secret is all the more embarrassing, considering that I have a university degree … in mathematics. Yet somehow, advanced calculus in the privacy of my own room was a breeze compared to simple arithmetic under the gaze of others – or even remembering my building’s security code. 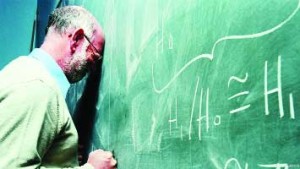 So I was relieved to discover that I am not alone in my “maths anxiety”, a surprisingly well-studied psychological condition. It’s exactly what it sounds like – a fear of numbers. Luckily for me, my fear was largely limited to on-the-spot mental arithmetic; once maths became less about numbers, and more about letters, I was fine. But for many it casts a serious shadow over their school days, meaning that psychologists are now devoting themselves to the causes and consequences of this strange numerical “phobia”.
To begin with, psychologists could only measure math anxiety with questionnaires asking participants to rate their feelings as they approached different kinds of maths-related tasks – from opening a maths textbook to entering an important exam. Although it has been mostly studied in young children, it seems that it can affect university students and adults too; even looking at a shop receipt can send some people into a panic. More recently, however, they have been able to study physiological responses too. They have found that although maths presents no real danger, it has a very real, physical response, including the release of stress hormones like cortisol, which are characteristic of the fight or flight response. One study even found that anticipating a maths test activates the brain’s “pain matrix” – the regions that might light up if you had injured yourself. 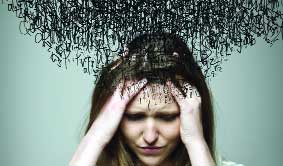 It’s not clear why maths arouses so much fear compared to geography. But the fact that there’s a right or wrong answer – there’s no room for bluffing – might make you more worried about underperforming. Even so, like many fears, it’s often unfounded – and may in fact damage your chances of performing well. In 2012, for instance, brain scans of children in America aged seven-to-nine found that those who feel particularly anxious about maths not only show greater activity in the tonsil-shaped amygdalae regions, which normally deal with threat; the fear also dampened firing in the prefrontal cortex (behind the eyes) – a region that deal with abstract processing. This is thought to reduce short-term “working memory”, meaning the children found it harder to concentrate and think about the sums at hand. One interpretation is that the anxiety itself is choking their ability to perform the sums.
That seed of fear may come from many sources – but one thought is that teachers may be spreading their own anxieties to the next generation. Children can sense if an adult feels nervous and begin to think they should be on the lookout for danger too – along these lines, teachers who feel nervous about their own mathematical abilities do tend to have more anxious pupils. Cultural expectations may also be to blame –girls may be more likely to catch maths anxiety (particularly from female teachers), perhaps because of stereotypes that girls are naturally not very good at maths. Your genes, meanwhile, might predispose you to anxiety more generally – making you more likely to respond aversely to maths as well as any other kinds of “threat”.
Whatever its origins, once the seed of the fear takes root, it may grow by itself: the more anxious you feel, the worse you perform, the more you shy away from maths and the more you worry when you face it again. And the psychologists suggest it may have serious consequences. People with maths anxiety were less likely to understand statistics about the apparent risks of genetically modified food, for instance; by the same token, it’s easy to see how it could lead to a serious misunderstanding of real dangers like smoking or over-eating.
Psychologists often treat anxieties with aversion therapy – in which you face your fears to try to learn to cope with the anxiety. Unfortunately, continued maths classes don’t seem to numb the dread. But there may be other solutions. So-called ‘expressive writing’ may be one simple measure – many studies find that articulating your fears can loosen their hold on you. One class asked to write about their fears before an exam improved their average grades from around a B- to a B+. Others are looking at subtle ways of reframing the fear – encouraging children to see a test as a challenge, not a threat, for instance, and explaining that their fear doesn’t not necessarily reflect a natural bad ability.

Could reframing my fears offset the panic the next time I am asked to split a restaurant bill? I’ll certainly give it a go. If not, there’s always my usual crutch – my smartphone calculator.