Superstars of the Avian World

When it comes to record-holders of the avian world, one is pretty well known, even to those who don’t follow this sort of thing. The Arctic Tern, a handsome orange-billed, white-feathered bird, migrates some 50,000 miles roundtrip each year, the longest journey of any bird—and farther than that of any mammal. But surely other birds astound with their feats of strength and amazing physical attributes. Here’s a small sample of some of these impressive species from (what else?) the 2015 Guinness Book of World Records.

Bigfoot
It’s a good thing the Northern Jacana, a marsh bird about the size of an American Robin, doesn’t need shoes. This bird, which lives mostly in the tropics (and occasionally Texas), has the longest toes of any bird, relative to body size. Each foot has four nearly three-inch long appendages, about the size of human fingers. The jacana makes good use of its long toes, too—they essentially allow the bird to walk on water, balancing on floating plants and lily pads.

Grounded
After hatching, Wandering Albatross chicks take an average of 280 days to make their first flight. That’s more than nine months, compared to the weeks it takes some other species. This reticence is partially why these birds breed only once every two years. Once the birds do take flight, they don’t turn back: Wandering Albatross can soar for up to five years straight without touching land (eventually they return to shore to breed).

Loud Mouth
If you’re interested in keeping your hearing, step away from theMoluccan Cockatoo. The squawk of these birds, endemic to Indonesia, is purportedly recorded at 135 decibels. For context, a rock concert can top out around 125 decibels; a jackhammer hits about 130. The American Speech-Language Hearing Association says anything above 80 decibels for an extended period could cause permanent hearing loss.

Big Mouth
Pelicans are known for their unwieldy beaks, but the Australian Pelicantakes the cake. This bird’s bill can grow more than a foot long (official measurements put them between 13 and 18.5 inches), the largest in the avian world. Good thing too, because these pelicans can eat up to four pounds of food—fish, crustaceans, even small turtles—every day.

Big Bird
The tallest living bird is the North African Ostrich—the males can grow to nine feet tall, and weigh more than 300 pounds. Of course, if theElephant Bird—a flightless creature that likely went extinct in the 17th century—were still around, it would be no competition.

That extra-big bird was believed to reach 10 feet tall and about 1,100 pounds.

Small Bird
It’s easy to overlook the smallest of birds, the Bee Hummingbird. Named for the animal to which it’s comparable in size, this avian weighs in at less than 1/10th of an ounce (2.2 grams), with a wingspan of just two inches.

This tiny flutterer, endemic to Cuba, is near threatened, namely due to loss of habitat from agriculture, according to BirdLife International.

Homemaker
Australia’s Malleefowl builds the largest ground nest in the world. These “nests” are actually mounds made from sand and debris. During breeding season, the mounds must stay at just the right temperature, which the male judges by sticking his head right in. That’s because he’s got a built-in thermometer: It’s thought he uses his tongue to test the temperature.

Look Out Below
Peregrine Falcons are fast all the time, but particularly when diving. They can cruise at speeds of 33 mph, but when they’re on the hunt, they’ve been clocked at up to 238 mph.

Speed Demon
The Peregrine Falcon may be the fastest diving bird, but Grey-headed Albatross have them beat when it comes to level flying. At least one individual of this species was tracked sustaining nearly 79 mph for more than eight straight hours—during a storm, too. Sadly, BirdLife International lists the species as endangered due to long-line fishing and other threats.

All Aflutter
In everyday life, the Ruby-throated Hummingbird beats its wings more than 50 times a second. During courtship displays, that increases to as much as 200 beats per second. 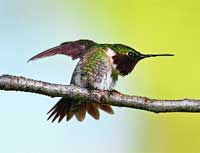 That’s a lot of effort for what often turns out to be a short-lived fling: “Pairs are together long enough for courtship and mating—just a matter of days to weeks” according to Cornell’s All About Birds. “Then [the male] is off on his own.”