A master calligrapher, Mohammad Bozorgi, recognised for his innovation of traditional forms, will debut recent works that reflect new experiments in merging the text-based abstraction of Islamic art with the aesthetic concerns of contemporary painting. The exhibition at Ayyam Gallery Dubai (Al Quoz) will open on May 25 and will run until July 30, 2015.

Combining the illusionistic, multidimensional perspective of Op art with the intricate symmetry and pictorial invention of Islamic manuscripts, Bozorgi creates compositions that appear to palpitate as Arabic and Persian texts 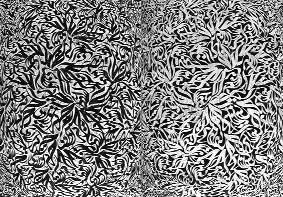 are freed from linear orientation. Morphing into fluid forms that float, swarm, or rotate across the canvas, the semiotic meaning of the artist’s calligraphy changes as it seems to go beyond its original realm of spirituality with allusions to material subjects and realities, bringing the sacred domain of devotion closer to perceptual experience.
Inspired by the tenets of Islam, Bozorgi’s methodical formal techniques see him painstakingly transform the many names of God and other key words and passages from the Holy Qur’an into powerful visual manifestations that allude to metaphysical existence. 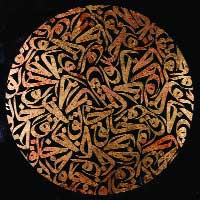 The highly symbolic hues employed by the artist, referencing the representational color schemes of Islamic art, describe the radiating energy of his forms, and add an extra spiritual weight to his paintings with striking vividness.
In his latest works, Bozorgi uses technically complex repetition and symmetry to create vast and densely filled compositions. Often ‘mirroring’ one side of the canvas with the other, individual letters and characters are intertwined and pulled and stretched, resulting in dramatic kaleidoscopic paintings. The viewer is struck by the potentially endless permutations of the artist’s forms, an aspect of his work that persuades meditation as viewers are invited to enter a world of infinite space where the process of creation also seems endless with lines, words, and shapes colliding and uniting, leading to elevated ambits. 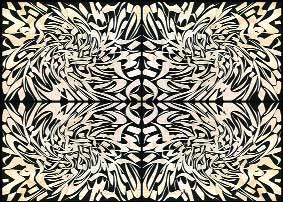 Mohammad Bozorgi
Mohammad Bozorgi approaches calligraphy with an architectural eye that is evident in the mathematical structure and symmetry of letters, especially those of his Crying for Honour series. Bozorgi’s masterful command of the centuries-old tradition is the result of intensive studies in classical calligraphic forms such as divani, kufic, nastaliq, naskh, sols, Mohaggegh, and broken nastaliq in order to develop distinctly stylised characters based on Arabic and Persian examples. After training with the Society of Iranian Calligraphers for over a decade, Bozorgi left the institution to pursue more innovative calligraphic forms. Drawing from his background in engineering, he makes qualitative calculations when constructing his works, using the directives of geometry to create abstract illusions of movement and space. Building on the breakthroughs of his predecessors, such as those who led the Saqqakhaneh school of Iranian painters in the 1960s, Bozorgi is recognised as a leading figure among the ‘New Generation’ of contemporary calligraphers.
Born in Tehran in 1978, Mohammad Bozorgi holds a Bachelor of Science in Biomedical Engineering as well as an MBA from the Industrial Management Institute and Momtaz degrees from the Calligraphy Association of Iran. His recent solo and group exhibitions have been held at Ayyam Gallery, Jeddah (2014); Homa Gallery, Tehran (2014); Galerie Nicolas Flamel (2013); and Kashya Hildebrand Gallery, Zurich (2012). 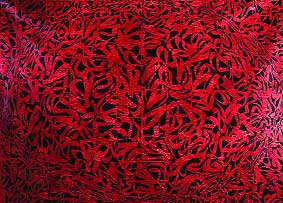 Founded in 2006, Ayyam Gallery is a leading arts organisation, managing the careers of a diverse roster of established and emerging artists from the Middle East. Blue-chip art spaces in Beirut, Dubai, 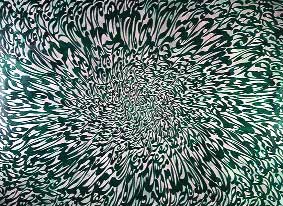 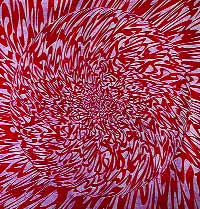 and London, a series of collaborative projects in the United States, Europe, and Asia, and a multinational non-profit arts programme have furthered the gallery’s mandate of expanding the parameters of international art by introducing the dynamic art of the region to a global audience. With its widely respected multi-language publishing division and a custodianship programme that manages the estates of pioneering artists, Ayyam Gallery has also spearheaded recent efforts to document the region’s art history.