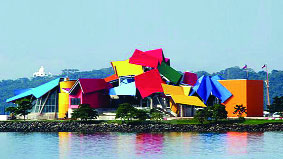 Real museums are places where time is trasformed into space.
– Orhan Pamuk

A wide variety of museums share the ability to inspire visitors by the process of discovery, as exhibits demonstrate what a wide world it is or how deep a concept can go. This common ability to inspire, more than art, culture or even education, defines what a museum is. Here is the description of eight latest museums that have attracted the attention of the world in short period of time.

Biomuseo, Panama City
Frank Gehry’s latest project opened in Panama this month. Sitting at the entrance of the Panama Canal, the Biomuseo is the American architect’s first work in Latin America. Famed for his Guggenheim Museum in Bilbao, Spain, Gehry has again created an “eye-catcher on a bravura scale”; the 4000-square-metre building has eight galleries and is meant to represent the Panamanian landmass rising out of the ocean to bring together the continents of north and south America.

Sifang Art Museum, Nanjing
Steven Holl follows up his Nelson-Atkins extension in Kansas City with a project aiming to recreate the “parallel perspectives” characteristic of Chinese paintings. The Sifang Art Museum in Nanjing was inspired by artists who rejected the single-point perspective of Western painters, creating “a sense of mystery about the space”, according to Holl. Opening in November 2013, and co-designed by Chinese architect Li Hu, the museum winds up from a base covered in bamboo-formed concrete to an upper gallery that offers a view of Nanjing.

Danish National Maritime Museum, Helsingør
Danish architects Bjarke Ingels Group (BIG) broke the rules when bidding to design the new Maritime Museum in Helsingør: although the brief stated that the new building be sited above a dry dock, they decided to place it inside the dock instead. Their design has won a RIBA Award, and prevents the new museum from competing with the neighbouring World Heritage-listed Kronborg Castle. A series of bollards and benches mark out the museum’s edge, spelling out its name in Morse code, and sleek glass contrasts with the weathered concrete of the old dock.

Stedelijk Museum, Schiedam
The neoclassical Giudici chapel in the heart of the Stedelijk Museum had been a neglected space before the architect studio MVRDV began their transformation. Completed in 2014, the project kept all of the existing structure – it is a listed monument – but created a modern entrance united by a series of large book shelves that can be removed at any time without leaving a trace. Framing historical elements like windows, columns and the organ, the design adds warmth to the chapel while respecting its former function.

Aga Khan Museum, Toronto
A business park on the outskirts of Toronto is the unlikely setting for a building offering a new home for Islamic art in North America. Opening last month, the Aga Khan Museum and Ismaili Centre have been designed by two of Asia’s most celebrated living architects. Japanese Pritzker winner Fumihiko Maki created a structure that resembles a giant cardboard box with sections flipping open for the museum, and the centre is the work of the Indian modernist Charles Correa. The Aga Khan, a billionaire spiritual leader, is housing his hoard of Islamic art in the 10,000-square-metre building, which sits on a courtyard scaled to the width of the Great Mosque of Isfahan.

MuCEM, Marseille
The first museum dedicated to the cultures of the Mediterranean opened in 2013, part of the celebration of the European Capitals of Culture. Designed by the Algerian-born French architect Rudy Ricciotti, MuCEM cost 191m Euros and features a soaring walkway from its monolithic structure to the 17th Century Fort St John. Ornamental concrete provides a filigree surrounding the building, which Ricciotti has described as a “vertical casbah”. He says: “Open to the sea, it draws a horizon where the two shores of the Mediterranean can meet.”

Porsgrunn Maritime Museum, Norway
Another Scandinavian museum dedicated to maritime history has opened in the past year, as Danish architects COBE and Transform completed an aluminium-clad building in Porsgrunn, Norway. With a zigzagging shape modelled on local wooden buildings is broken into 11 blocks with roofs pitching in different directions. The metal shingles create a scaly surface, picking up reflections from the river and surrounding mountain landscape.
Chang Ucchin Museum, South Korea

At the meeting point of two rivers south of Seoul, Korean studio Chae Pereira Architects have created a mountainside building shaped like a knot.
The museum, dedicated to the artist Chang Ucchin, is inspired by his work and aims to create “a space that would reflect the painting’s own character”.
Four wings frame different views of the landscape, with forms generated from several of Ucchin’s paintings, combining modern aesthetics with traditional details.
One of the architects, Laurent Pereira, told Dezeen:
“It is a kind of soft labyrinth, with visual shortcuts and unexpected tensions, but with very plain shapes and few details.”