The Hottest Insect in the World 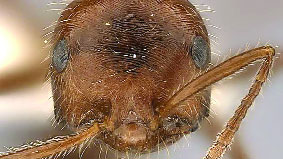 The scorching heat of the midday desert sun is too much for most animals.
Not so the Sahara desert ant (Cataglyphis bicolor), which waits in the shade of its burrow until temperatures become unbearable for other species before emerging to feast on the corpses of insects that have succumbed to the heat.
C. bicolor is reported to be able to forage in surface temperatures of up to 70 degrees C for short periods.
In fact at least three species groupings, or genera, of scavenger ants, are known to be able to operate when ground temperatures reach 60 degrees or higher: Cataglyphis,Ocymyrmex and Melophorus in the Sahara, Nahib, and Australian deserts respectively.
However heat tolerance is not just about the highest temperatures at which an insect can operate in the short-term. When investigating which species had the greatest heat tolerance, Van Sherwood, now an entomologist with the US Army, also looked at their critical thermal maxima (CTM), or the temperature up to which they lose the ability to escape of their own accord in the lab.
Tests have shown Ocymyrmex barbiger falls into a heat coma after 25 seconds at 55 degrees C and Melophorus bagoti can survive for an hour at 54 degrees C. However the Sahara desert ant claimed the prize of most heat resistant species with a CTM of 55.1 C.
At the hottest time of day it leaves its burrow for just a few minutes to forage while its predators are hiding from the sun. Its periodic observation of the Sun’s position, constant counting of its own steps and fine sense of smell allows it to find its way back home rapidly to avoid it too falling victim of over-heating.

Being able to withstand such extreme heat also reduces competition for food from less thermo-tolerant scavengers.
Three main characteristics and behaviours allow the Sahara desert ant and other thermophilic ants to be active in temperatures that would quickly kill most other animals. They are quick; Cataglyphis fortis and Cataglyphis bombycina, its close relatives, have been clocked moving at one metre per second. Their relatively long legs mean temperatures at the height of their bodies are 6-7 degrees cooler than on the ground. They also pause on dry stalks of grass onto which they off-load excess body heat.