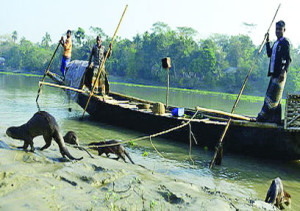 The fishing boat is not very long in size, may be fifteen feet in length. Four men, Bipul, his father and two others, are in the boat while Bipul is steering the boat to the preferred destination. A long bamboo made box is kept in the middle of the boat, some dark shaped bodies are moving inside. Bipul’s father and others are shaping the fishing net. When they are ready, Bipul stops the boat and they place the net in the river. Few minutes later, the father signals Bipul and he opens the lid of the bamboo made box and the three short-haired bodies, roped in the body, dive into the water moving in different direction. Bipul, in the other end of the ropes, starts controlling the bodies of the otters, called ‘Bhondor’ in Bangla so that more fishes can be caught.
The otters do not catch the fish themselves; instead they chase them towards the fishing net placed next to the boat. The otters manage to spot fish among the plants, then the fish swim away and the fishermen net them.
Although otters are fish eating mammal, those that help the fishermen catch fish, do not eat fish during the fishing time. The otters used for catching fishes are usually domestic, well trained and fed by the fishermen. Fishing is usually done during the night when the fishermen can expect to catch between four and twelve kilograms of fish, shrimp and crabs. Each adult otter consumes 3-4 kgs of fish a day.
Fishing with otters is a century-old but rare technique. However, this technique, co-ordination between man and the trained otters, is dying and already died out in other parts of Asia. In Bangladesh, like Bipul and his father, some hundred families are still using this old technique to catch fish, and, unfortunately, it is decreasing too. It is popular in the southern parts of Bangladesh, especially in the Sundarbans area.
Mohammed Mostofa Feeroz, a zoology professor at Jahangirnagar University, has been studying otter fishing for 25 years and according to him, over this period the number of families involved has dropped from 500 to 150. If this trend continues, there will be no single family involved in this occupation within the next two decades, he warned recently.
The reason behind this is the reduction in natural fish production. Over sedimation, water pollution from oil and the use of pesticides in paddy files as well as over catching are having impact in this reduction.
The reduction of the natural fish production has also affected the otter’s life. The otters are an endangered species in Bangladesh and otter plays a key role in their conservation. The captive otters are healthy because of fishing. Sometimes fishermen release otters into the wild, which strengthens the population of the otters.
Direct intervention of the government, as well as involvement of national and international research organizations is must in protecting one of the last remaining traditional conservation practices in Bangladesh.