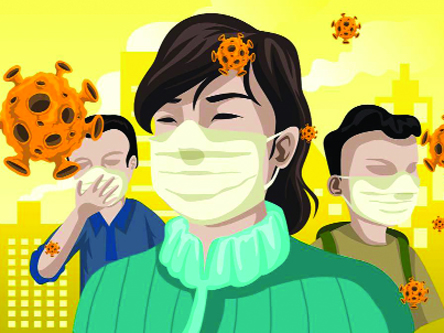 Wuhan is locked down: nobody can enter or leave the city without a permit. Schools are closed and roads are empty. Suddenly, a city that was booming with life and economic prosperity found its place in jeopardy. In a matter of a month, the novel coronavirus has claimed more a thousand lives and infected about 70 thousand people.
This mysterious virus that supposedly emerged from China has been finally given an official name as “SARS-CoV-2” by International Committee on Taxonomy of Viruses (ICTV) for its role to cause the severe acute respiratory syndrome. The World Health Organization (WHO) declared a global health alert and named the disease as COVID-19 (Coronavirus Disease 2019). The new virus belongs to the family of coronaviridae and it has novel elements in its genome to be termed as a novel virus. When seen under an electron microscope, the viruses look exquisitely beautiful with their intricate spherical shape, but what lies beneath the surface is a deadly weapon of genetic material armed to destabilize our human body. 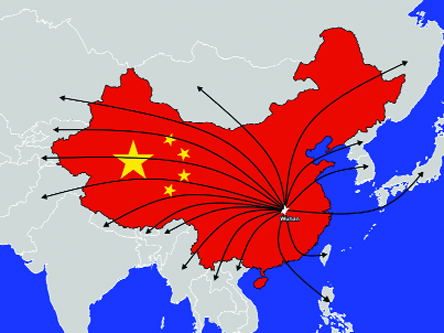 The COVID-19 virus was first identified in Wuhan, the capital of Central China’s Hubei province with a population of over 11 million. On December 2019, doctors reported a series of patients infected with mysterious pneumonia-like symptoms but with no known viral etiology. Scientists then isolated the virus from the patients and sequenced its genome to conclude that it is a zoonotic coronavirus that can cross the species’ barrier to change its host from animals to human. In the stretch of a year, the outbreak has now been converted into an epidemic and the virus has crossed the borders of China to infect people of different countries, thanks to the advances in transportation. Now, a virus can hide inside a human host and can travel from one part of the world to another in just 24 hours. 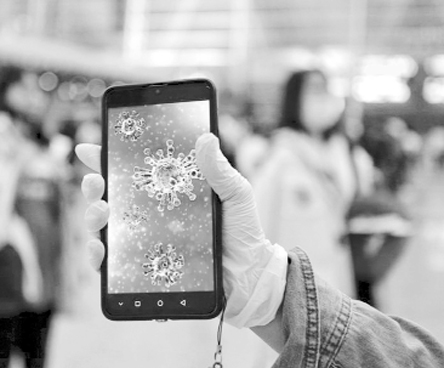 In the last two decades, three zoonotic coronavirus outbreaks wreaked havoc to human lives: Severe Acute Respiratory Syndrome (SARS), Middle East Respiratory Syndrome (MERS), and Swine Acute Diarrhea Syndrome (SADS). However, the COVID-19 seemed to have taken over all three coronaviruses in terms of infection and fatality counts. While SARS cases peaked at 8500, the COVID-19 infections surpassed 80,000 in just over one month. The children and the elderly people who are already suffering from asthma, diabetes, heart diseases are at greater risk. A thermal scanner that detects whether a person has a fever or not, but the fact that the virus has an incubation period of two days to up to two weeks, and can cause both symptomatic and asymptomatic infections, make it difficult for the doctors to identify patients in the early stage. Typical symptoms include fever, cough, shortness of breath to progressive pneumonia, multi-organ failure and death. The COVID-19 can also cause disease with mild symptoms to no symptoms at all while the virus can still transmit itself from one person to another by way of air-droplets or close contacts. Studies have shown that the virus can remain intact on the surface of inanimate objects for hours, and cool temperature with high humidity increases the chance for its survival. 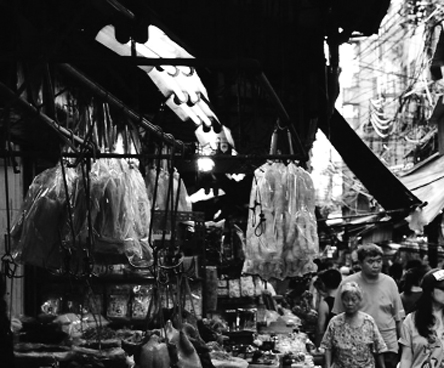 The viral source might have originated from bats and the source of the outbreak likely occurred from the Wuhan wholesale market where live and dead animals such as bats, dogs, chickens, pigs, snakes, civets, sheep, foxes, badgers, bamboo rats, hedgehogs and more are in constant close contact. This increases the probability of zoonosis, that is, the jump of the virus from one host to another host. In 2003, the SARS outbreak occurred from weasel-like mammals called masked palm civets to humans, but the virus originally sequestered itself inside bats. Bats are notorious for their capacity to harbour a wide range of viruses, which they can transmit to other animals. These wet markets provide a hub for such transmission since vendors often slaughter the animals on demand of the customers.
The genetic sequence of the COVID-19 reveals that the virus has fewer mutation counts, indicating that it has recently jumped to humans. The longer a virus can circulate in human populations, the more time it gets to mutate itself. The nucleotide sequence also gives clues to the scientists as to the origin of the virus. This plays as a key role in stopping the outbreak, otherwise, the virus will disseminate itself in discreet populations and become an endemic virus with frequent recurrence here and there.
So far, the virus has infected 1700+ health professionals who were relentlessly working day and night to treat the patients. In response to the situation, China has already built two specialized hospitals and set up temporary medical centres for providing quick treatment. Flights have been cancelled and factories closed along with locking down of workplaces in a bid to contain the disease remain in place in China. Despite the efforts, the virus has already found its way into other continents affecting as many as 28 countries including France, Germany, UK, US, Malaysia, Japan, Singapore, Hong Kong, UAE and Australia.
Amid the increased tensions and turmoil, there are reports suggesting that the Chinese authorities be blamed for their lack of concern during the initial phase of the outbreak. Microbiologists at the Wuhan Institute of Virology published a scientific review paper on march 2019 warning that bats were working as the natural reservoir of the coronaviruses, and since two previous outbreaks — SARS and SADS — originated from China, it was highly likely that another future outbreak of coronavirus would occur unless precautions were taken to limit human interactions with the bats and to destroy the virus hotspots. However, no viable action was taken from the authority of concern. On top of that, the doctor Li Wenliang who was one of the first to recognize the severity of the disease was detained by the police in accusation of “spreading false rumours” and forced to sign a paper to admit that he had “seriously disrupted social order”. Li Wenliang tried to warn everyone of the danger on social media as he himself was infected with the virus and his condition deteriorated over the next few days. The govt tried every measure to hush the news up from the media and thereby engraving the situation to a greater extent since people couldn’t be aware of the situation. The death of the doctor sparked a nationwide rage and people took Weibo to the storm to express their anger over the way the doctor was censored for talking about the coronavirus.
The outbreak of the infection also gave rise to an opportunity for an overpouring amount of misinformation and disinformation. The rumours are parallelly spreading as panicked citizens tend to share everything found on the internet without a check. There are already conspiracy theories circulating on the web about the virus being leaked from a virology laboratory or it was an intentional release as part of the bioweapon testing. Reports have shown that the false information and panic about the coronavirus have also led to a series of racial abuse and violent attack on Asian men in various places. People have also been the victim of false cure such as garlic, alcohol spray, sesame oil, salt-water rinsing or plant-based herbs with no known activity against viral pathogens. To date, there is no evidence that pets such as dogs and cats can be infected with the new virus.
The impact of the epidemic is also tremendous on the global economy as China serves as the major supplier of various goods across the world. In fear of the virus being transferred via inanimate objects, shipments from China are blocked from entry into the local market. This means that the global supply chain is already underway of recoiling as multinational companies were reassessing their reliance on China for raw materials due to US-China trade war. Inside China, the knock-on effects of SARS-CoV-2 on China is worse than what was previously thought. The Chinese economy has received a major blow as factories and offices are not running in the full swing. This is especially crucial for the small and medium-size enterprises which are vulnerable to business interruption and closures. 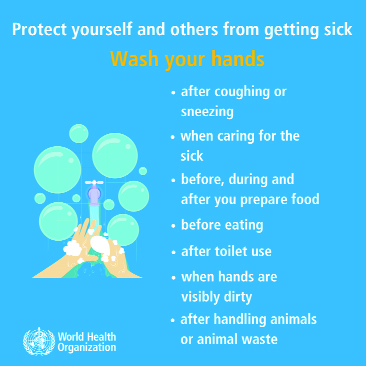 To fight the virus, scientists are working in groups to contain the virus and also to formulate effective therapy. Although there is a fear of the virus becoming a ‘community virus’, the public health epidemiologists are focusing right now on surveillance to track cases and containment strategies to slow the possible progression of the virus while the microbiologists and the biomedical scientists are trying to design antiviral treatments and vaccines. But, designing an effective vaccine and running clinical trials will take at least a year. In the meantime, the doctors are trying to prescribe protease inhibitor drugs as a last resort for critical patients that were originally built for HIV and Ebola treatment. Remdesivir, a drug that was found useful against the MERS-CoV, is now being used to treat COVID-19 as part of the clinical trial.
To protect people from being infected, the WHO has declared Public Health Emergency of International Concern (PHEIC) and provided a basic guideline as protective measures against the new coronavirus:
♦ Wash your hands frequently (Use soaps or alcohol-based handsanitizers)
♦ Avoid touching your eyes, nose, and mouth with unwashed hands
♦ When coughing and sneezing, cover mouth and nose with flexed elbow or tissue – discard tissue immediately into a closed bin
♦ Avoid consumption of raw or undercooked animal products
♦ Politely avoid shaking hands or hugging people
♦ Maintain close contact from those who are already
♦ If you have fever, cough and difficulty breathing, seek medical care early

As humans have started destroying forests and opened up large scale business with wildlife animals including direct consumption of bats, snakes and other animals, it is more worrisome than ever before that new animal viruses will emerge in the future by changing their natural host to jump to humans. Zoonosis is preventable only when we let wild animals live in their own habitat and not make them a recipe for our food. In the Quran, Allah Subhanahu Wa Taala has provided guideline about the animals that are haram for consumption, for example, dogs, bats, snakes, pigs, crocodile and others that harbour a wide range of notorious viruses.