Girt by sea as we so famously are, it’s no surprise that Australia is home to plenty of likewise famous shipwrecks. After all, before human flight, a ship was the only way a European could travel to the sunburnt country.
What is a surprise though is that it took so long for Australia to be discovered by Europeans at all. During the Age of Discovery (which ended in the late 17th Century), only a few Dutch explorers skirted the northeast, and Abel Tasman stumbled across Tasmania. 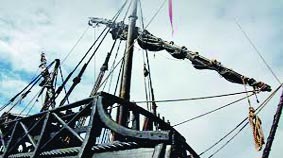 he legend of a European ship maybe a Portuguese caravel from the 15th Century lying buried in the sand dunes of southwest Victoria is entirely plausible.

Yet the globe had been positively lousy with European explorers following the closure of the Eastern overland trade routes with the fall of Constantinople in 1453. Europe was desperate to find another route to India and the Far East, and so expeditions to the very south of Africa were common. And once you round the Cape of Good Hope, there’s a good chance you’ll be blown by a storm due East, and end up hitting Australia.
So the legend of a European ship – maybe a Portuguese caravel – from the 15th Century lying buried in the sand dunes of southwest Victoria is entirely plausible. Locals and anyone with at least a passing interest in Australian shipwrecks has heard of this wreck – it’s called the Mahogany Ship, and while the alleged ship turns 490 this year, even the legend itself is at least 150 years old.
The story goes that in the dunes of Armstrong Bay, close to the modern town of Warrnambool, lies a very unusual shipwreck. As early as 1847, local newspapers reported a (for the times) massive wreck in the sand, as big as a 300 tonnes. Not a new wreck – something old. Something very old, uncovered by a storm or a king tide. Whalers who saw the wreck claimed it was made of a dark wood (though they never said Mahogany), and fancied it was of Spanish design. Naturally, they thought it might be full of gold.
How the wreck came to be known as the Mahogany Ship is more a matter of popular acclamation rather than scientific observation. A Captain John Mason wrote a letter to a newspaper in 1876 suggesting the wreck was made of a dark timber, such as Mahogany. Fourteen years later, in 1890, he felt compelled to explain that he wasn’t really sure, and that probably it wasn’t Mahogany at all. Too late: by that time, the name had stuck, and the Mahogany Ship has been just that ever since.
The name might have stuck, but certainty about the wreck itself certainly hasn’t. An endless parade of wreck-hunters has marched around on those dunes, with serious expeditions mounted in the 1990s unable to reach a definite conclusion either way. Complete absence of a wreck might help put the legend to rest, but various intriguing artefacts have shown up, including parts of very old ships or parts that should not have been in the area. A team from the University of New England even used hyper-sensitive magnetometers to seek out the wreck, but found nothing conclusive.
Part of the problem with the Mahogany Ship legend is that so much actual information about the wreck is based on, well, nice ideas that people have from time to time. From whalers in 1836 saying to someone that they thought the wreck looked kind of Spanish, to historian Kenneth McIntyre who nominated the (undiscovered, remember) wreck as evidence of a secret Portuguese expedition to explore Australia in 1522. 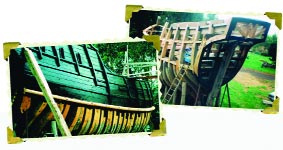 Graeme Wylie s caravel replica Notorious was built in his backyard, only 20 km from where the Mahogany Ship is rumoured to lie.

While the Iberian connection had been floating around for years, it was McIntyre who first published the theory that the wreck might be a Portuguese caravel. His 1977 book The Secret History of Australia – Portuguese ventures 200 years before Captain Cook was based largely on detailed research of events in Europe. The Mahogany Ship was, perhaps ironically, press-ganged into service as evidence of the 1522 expedition.
In more recent years, most academics reject this theory as lacking in real evidence. But it’s a tantalising thought: a Portuguese explorer’s ship, wrecked in the dunes nearly 250 years before the Endeavour sailed in to Botany Bay.
Almost every theory about the Mahogany Ship is based, essentially, on guesswork from reading 150 year-old eyewitness accounts of what, even then, was a 300+ year-old wreck. But there is one man whose wild theories about the Mahogany Ship might be a little more grounded in reality than most.
His name is Graeme Wylie. He’s not an academic, or an historian, or an archaeologist. He hasn’t spent years searching the dunes of Armstrong Bay, though he was born nearby and grew up on the Mahogany Ship legend. And he’s not even one of those guys who keeps pushing wreck theories on anyone who asks – though if you do ask, he’ll give you a pretty good reason why he’s interested in that maybe-real-maybe-not ship.
That’s because Graeme Wylie is a Victorian furniture maker who, during a bout of illness, kept himself busy by building nothing less than a real caravel, in his backyard. A perfect, working replica of the kind of ship that some say lies buried less than 25 km from his home.
“I had about 300 tonnes of timber from my furniture business, mostly cypress,” he says. “I just worked on it for about 10 years. Taught myself ship architecture from books, consulted with shipwrights, and did a lot of research.”
Wylie’s caravel, launched in 2011, is called Notorious. And she cuts a menacing figure, thanks to a cheeky Jolly Roger flag, huge handmade triangular sails, and a period-correct coating of “black varnish” – tar and linseed oil. At 19 metres, Notorious is smaller than the fanciful galleons in the Pirates of the Caribbean movies, but she still boasts the unmistakable hull lines of something Jack Sparrow wouldn’t mind being seen skippering.
“Caravels were mostly built by eye,” says Wylie, “so that’s what I did. Lots of stability calculations, but everything above the waterline is based on artwork from the time.”
After 10 years of building and an incredible tale of moving this 58 tonne ship more than 20 kilometres overland to its launch point, Wylie was able to take his caravel for a spin.
“She handles absolutely beautifully,” he says. “We were in an eight-metre swell, and we weren’t even getting water on the deck.”
From jaunts in Bass Strait and the Southern Ocean, Wylie is sure of one thing. It would have been entirely possible for the Portuguese to sail a caravel to Victoria.
“Absolutely,” he says. “Not a problem at all.” With a full crew and provisions, a caravel can go almost anywhere. Which raises an interesting wrinkle in the Mahogany Ship legend. Highly manoeuvrable ship, in a sheltered bay, on sand, nowhere near cliffs or rocks. What’s not right here?
“I cannot believe in this area, in these waters, that an experienced crew could wreck a caravel,” says Wylie. “If the ship was grounded, she was beached deliberately.”
But why would the crew do such a thing? Wylie has a theory based on his research of the more practical side of caravel ownership.
“It turns out many of these ships only lasted four or five years,” he says. “They were built fast and on the cheap by dodgy shipwrights, and there was often lots of sawdust left in places where it could get waterlogged and cause problems.”
Wylie says that many caravels spent their operating lifetimes in the tropics, and had little protection against shipworm. 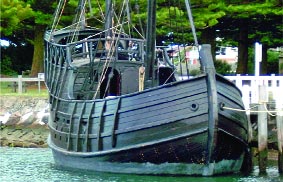 Notorious is treated with a period-correct black varnish made of Stockholm tar and linseed oil. The Mahogany Ship, while larger, may have looked much like this.

“I read stories of rudders just falling off, of crews unable to keep water out of the hull,” he says. From this, Wylie suggests that a multi-ship expedition would likely abandon a problematic caravel rather than try to sail it all the way back to Europe.
But if the idea of an accidental shipwreck seems unlikely to Wylie, does he believe the Mahogany Ship is real at all?
“The people who saw this wreck [in the 1830s] were experienced boat people, one of them was the harbourmaster. I believe they definitely saw something.”
Meanwhile, out in the dunes, thousands of pieces of worn driftwood slowly work their way up and down the beach as the wind blows through the grass and the sand shifts.
Some of those pieces are from Venetian or Dutch or even English ships, wrecked long ago off the Cape of Good Hope, flotsam drifting to wash up decades later in Victoria.
But just maybe, somewhere under that sand, there’s lies the proud backbone of an old caravel, or carrack, or galleon, just waiting for a big storm or a king tide to show her to the world once more.