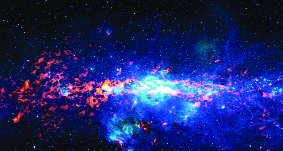 A chemical found in a distant space cloud looks a lot like a building block of life on Earth.
The cloud sits about 26,000 light-years away in interstellar space, a term for the gap between stars. Called Sagittarius B2, the cloud contains dust and gas — the stuff that makes up planets and stars. Scientists had identified other interesting molecules there before. But those molecules tended to have a ring shape or consisted of a straight string of atoms.
The newfound isopropyl cyanide (EYE-so-PRO-ul SIGH-ah-neid) is different. Its structure is branched. That means its atoms don’t line up straight, one after another. Instead, a single atom may connect to two or three others. These chains form branches, like in a tree, astronomers reported September 26 in Science.
Branching is a big deal to scientists. Most amino acids have a branched structure. Those molecules are the basic building block for larger molecules called proteins. And proteins are crucial to life.
Finding isopropyl cyanide suggests interstellar space may hold clues to how life started.
The discovery also supports the idea that meteorites (rocks from space that land on the ground) might have helped bring life to Earth. In the past 40 years, researchers have found dozens of amino acids in meteorites. Those molecules may form on rocks as they hurtle through space.
They also may form in distant gas clouds and then hitchhike across space. If that’s the case, then the ingredients for life aren’t unique to Earth — or even the solar system. Gas clouds may forge those ingredients. Passing space rocks may then ferry the molecules to other planets in the Milky Way — or even to other galaxies.
Finding complex molecules like isopropyl cyanide in space is tricky astronomy. As molecules vibrate and move in space, they give off energy. That energy may take the form of radio waves. Scientists on Earth can pick up those signals and identify where they came from using radio telescopes.
Arnaud Belloche and his colleagues didn’t use just one telescope when they studied Sagittarius B2. They used a whole network. Called ALMA — for Atacama Large Millimeter/submillimeter Array — it is made up of 66 radio dishes. They stare at the sky from mountains in Chile. Only 20 were running when Belloche collected data. Still, those were enough to get a good signal. Belloche is an astronomer at the Max Planck Institute for Radio Astronomy in Bonn, Germany.
The new study doesn’t prove that molecules necessary for life form in interstellar clouds, he told Science News. However, finding evidence that chemicals with a branched structure can form there is exciting, he says.
Eric Herbst agrees. An astronomer at the University of Virginia in Charlottesville, he was not involved in the study. He toldScience News, “This bodes well for the presence of amino acids.”