The Chinese are coming.
Paul Revere never had a chance with Taiwan, and the island falls within a week. No nukes–just tanks and landing crafts and bodies on the ground–your old-school stuff. A red tide out of the East, five gold stars glinting on each uniform. Mushroom clouds looming on the horizon. 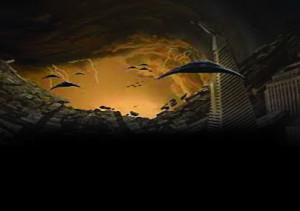 Now the preachers take to their soapboxes. Warmongers and peace-mongers, priests and imams and rabbis, humanists and liberals and republicans–CNN is spewing rights and freedoms, while Xinghua is on about brotherhood and community and bourgeois aggression – a giant ego-feud wrapped up in pretty words, as the howler monkeys screech and crow at the little gods on their LCD screens. The Secretary General is on TV making a lot of noise, but the only answers he’s got are halfway compromises, and everyone knows he’s just a wretched old windbag anyway, so they poke at him with their hardy-har-har’s until he deflates into a pile of skin and hair, hot air escaping through innumerable holes in his side.
In Jerusalem, mortar attacks rock the city.
In Tehran, The Coalition of Un-Aligned States sign their charter to bated breaths, and word on the grapevine is that they’re all building nukes too, so you know the world is going to hell.
In Taipei, a coded message is being sent. Muted and on-edge, asking politely to schedule an emergency defense summit, because they’ve just been caught with their pants down, and their friends are a long ways away.
In New York City however, it’s Christmastime. Shoppers and businessmen and bums are milling around Times Square, gorging on burgers and big-screens because it’s that time of the year, and because the stuff on the news has happened a million times before. Only, this time around, people have wised up to just how cheap life is.
You and I, we sit together–arm-in-arm and adamantly sharing a snow cone, even though it’s below freezing outside. The invasion on the news means nothing to us, but it’s a constant in the background drone of conversation. TVs blare from a RadioShack display, and the compound image of the man on the telly is yelling out red-white-and-blue Christmas patriotism, the land of the free and the home of the brave–only, please watch what you say, because you can lose your job if it’s too un-American. The audience nods in agreement, thumbing their noses at the ignorant Chinese across the ocean, because they get all their censorship from their government, while we here have the decency to do it ourselves.
I look over at you, the shadows in your face deep and surreal under the light of shiny storefronts. Cool modern women with cool modern boyfriends clop past us like wraiths with platinum hair. Display cases full of hopes and dreams–get yours now while they’re cheap. The dwindling snow cone tastes like ash and saccharine.
There’s an oversized mirror, and a tip of a cowboy hat–you look at your reflection, and crinkle your nose at it. Then you put the hat on me, and, after stepping back a few paces and shaking your head in a way that suggests I look thoroughly stupid, you toss it–because, believe me, honey–the whole cowboy thing is out of fashion these days, and unless you’re good-looking, urbane, and liberal, wearing a cowboy hat automatically makes you a redneck.
Huh.
“What, I’m not good-looking, then?”
You raise an eyebrow at me–seem to think about it for a second–then burst out laughing, burying your face in my chest to stifle the ha-ha-ha’s–and I can’t help but smile, even though I feel a little offended, if I’m completely honest. The strawberry snow cone is turning into steam where it melts onto my fingers.
The whorl outside has settled now (I can see streetlamps through the plated glass). We dance through the stores and displays and shoppers, and out onto the street, where you sing to me that you want to go walking.
I follow you into the snow.
High above, there’s a bang and a crack, a flash of light–sets off nervous titters amongst the crowds on the street, but the air raid sirens haven’t gone off, so it’s probably just fireworks, or an electric billboard blowing out.
I follow into the snow.
“Seriously. I’m not good-looking? Or am I not liberal enough, probably?”
You laugh. Ha-ha-ha. That same unearthly frequency that makes my stomach bounce and my teeth rattle. Then you wrap your arms around my waist, colors exploding in front of my eyes as you kiss me hot and deep, and the first thing I notice is that you taste like the saccharine and strawberries from that goddamned snow cone, and now you’re burning up and I’m burning up and the snow is evaporating off our collars and I’m so absorbed in the fireworks moment that I can’t even feel the cold anymore–
Blank.
When I come to, we are sitting angels in the snow–only, I think the snow might not be snow after all, but ash. I wipe my forehead, and my fingers come off asbestos-grey. I’m holding onto you with everything I’ve got, because the world might end tomorrow, and without you, I really wouldn’t know what to do.
High above, the twin turbines of a commercial jet roar their defiance against the ash-filled clouds. My world is an experiment in ash and light, in saccharine and the dusty aftertaste of strawberries.
New York City cascades away around us.
The world could end tomorrow, and we do not care.