Blazingly fast lasers have just leveled up
Ultrafast lasers emit short, rapid-fire bursts of light, with each pulse typically lasting tens of millionths of a billionth of a second. A new laser pulses 30 billion times a second — about 100 times as fast as most ultrafast lasers, researchers report in the Sept. 28 Science.
The speed boost was thanks to a new technique for making ultrafast lasers. Typically, researchers use a technique called mode locking, in which light bounces back and forth in a mirrored cavity in such a way that the light waves build on each other to create short flashes. The new method takes a more “brute force” approach, says study coauthor David Carlson, a physicist at the National Institute of Standards and Technology in Boulder, Colo., by essentially carving up a continuous laser beam into individual pulses.
Ultrafast lasers can produce what’s known as a frequency comb, light made up of discrete colors. Those evenly spaced hues look like the teeth of a comb when plotted. To make the new approach work, the scientists had to eliminate electronic jitter that would otherwise smear out the comb’s sharp teeth. 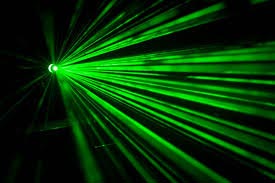 These combs can be used as a kind of “ruler” for light, and are so useful for precisely measuring the frequency of light that part of the 2005 Nobel Prize in physics was awarded to two researchers who had developed the technique. Part of the 2018 Nobel Prize in physics was also awarded to ultrafast laser research, for a method to produce very intense, short laser pulses. But that technology was not used in this work.
The faster pulses achieved with the new technique result in a frequency comb with more widely spaced teeth. That property could be useful for calibrating telescope instruments called spectrographs, which slice up light from stars into various colors, aiding scientists in observations such as the hunt for planets beyond the solar system. Those spectrographs can’t distinguish frequencies that are too close together, so the instruments require a wide comb.
Faster pulses could also speed up certain kinds of imaging of biological tissues. And the laser could be useful for telecommunications, says physicist and electrical engineer Andrew Weiner of Purdue University in West Lafayette, Ind., who called the work a “tour de force.” Each color of light could carry its own stream of information in a fiber-optic cable.
The researchers “have achieved this amazing level of performance,” says physicist Victor Torres-Company of Chalmers University of Technology in Gothenburg, Sweden. “It’s up to us to think and dream what we could do with this light source.”