Why Sleep Should Be Student’s Priority

Jakke Tamminen has plenty of students who do that very studenty thing of staying up all night right before an exam, in the hope of stuffing in as much knowledge as they can. But “that’s the worst thing you can do”, the psychology lecturer at the UK’s Royal Holloway University warns them.

He should know. Tamminen is an expert on how sleep affects memory, specifically the recall needed for language. Sleep learning – another idea beloved of students, in the hope that, say, playing a language-learning recording during sleep would imprint itself into the brain subliminally and they’d wake up speaking Latin – is a myth. 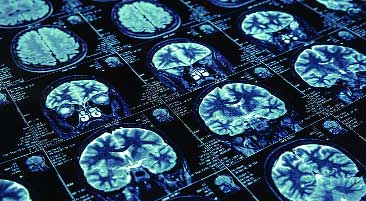 During slow-wave sleep, the hippocampus and neocortex communicate to encode information for longer-term recall

But sleep itself is essential for embedding knowledge in the brain, and the research of Tamminen and others shows us why that is.

In Tamminen’s ongoing research project, participants learn new vocabulary, then stay awake all night. Tamminen compares their memory of those words after a few nights, and then after a week.

Even after several nights of recovery sleep, there is a substantial difference in how quickly they recall those words compared to the control group of participants who didn’t face sleep deprivation.

“Sleep is really a central part of learning,” he says. “Even though you’re not studying when you sleep, your brain is still studying. It’s almost like it’s working on your behalf. You can’t really get the full impact of the time you put into your studies unless you sleep.”

Inside the sleeper’s brain

We’re standing in Lab Room 1 of Tamminen’s sleep lab, a sparsely decorated room with a bed, a colourful rug, and framed paper butterflies. Above the bed is a small electroencephalography (EEG) machine and monitor to detect activity in each research participant’s brain, via electrodes placed on the head. 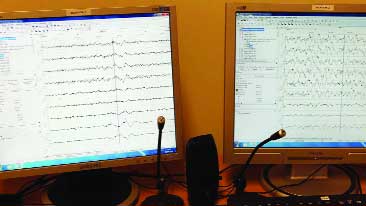 While a participant is sleeping, researchers can see activity in different regions of the brain

Down the hallway is the control room, where researchers can see in real time which parts of each volunteer’s brain are being activated, for how long, and to what extent. It’s easy to tell when a volunteer is in the rapid eye movement (REM) phase, based on the activity in the E1 and E2 (eye 1 and eye 2) graphs.

But more critical to Tamminen’s current research – and to sleep’s role in language development more generally – is a non-REM phase of deep sleep known as slow-wave sleep (SWS). SWS is important for forming and retaining memories, whether of vocabulary, grammar, or other knowledge. The interaction of different parts of the brain is key here. During SWS, the hippocampus, which is good at quick learning, is in constant communication with the neocortex, to consolidate it for long term recall. So, the hippocampus might initially encode a new word learned earlier that day, but to truly consolidate that knowledge – spotting patterns and finding connections with other ideas that allow for creative problem-solving – the neocortical system needs to get involved. 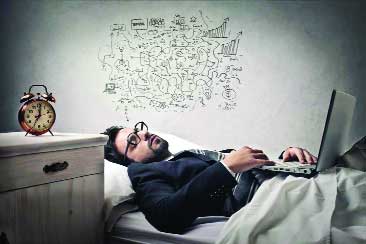 This information expressway between the hippocampus and the neocortex is populated by sleep spindles – spikes in brain activity that are no more than three seconds long.

“Sleep spindles are somehow associated with linking new information with existing information,” Tamminen says. And the data from his research participants suggests that people with more sleep spindles have more consolidation of the words they have learned. (Read more about how you can learn in your sleep).

While Tamminen focuses on slow-wave sleep, there’s a theory that REM sleep plays a role in language development too, through the dreaming that happens during this part of the sleep cycle. Research at the sleep and dreams lab at Canada’s University of Ottawa found that the brains of undergraduates dreaming in French were essentially able to make new connections with the language they were learning.

Dreams, after all, are more than simply a replay of what happens during the day. Research has suggested that the regions of the brain that manage logic (the frontal lobe) and emotion (the amygdala) interact differently during dreams, allowing for these imaginative new connections in the language learner. And students intensively studying the second language had more REM sleep. This gave them more time to integrate what they were learning while they slept – and better results during the day.

There’s a genetic component to how many sleep spindles we have. There’s also a genetic basis to our internal clocks, which tell us when it’s time to go to sleep and wake up. And adhering to these hard-wired cycles is necessary to reaching our peak cognitive performance. (Read more about why night owls shouldn’t try to be morning people – and vice versa).

Few people know more about this subject than Michael W Young, who in 2017 was awarded a joint Nobel Prize in Physiology/Medicine for his work on clock genes with two co-researchers. Young explains that for optimal functioning – whether at school, work, or other areas of life – “what you want to do is to try to recreate a rhythmic environment”.

For a person whose lifestyle, environment, or inherited sleep disorder leads to distorted sleep patterns, “a cheap first-line response” could be using blackout curtains at night or bright lights during the day to mimic natural light/dark cycles as much as possible.

The circadian rhythm’s role in adult learning is unquestionable, but its importance may be particularly pronounced in childhood. 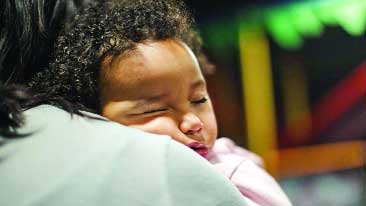 Daytime naps in children are key for their ability to learn
new words, among other language skills

Children have more slow-wave sleep than adults – which may be one factor explaining how quickly kids learn, in both language and other areas. The child sleep lab at Germany’s University of Tuebingen investigates the role of sleep in consolidating children’s memory. Monitoring what happens in children’s brains during sleep, and how much information they retain before and after sleep, shows that sleep helps with accessing implicit knowledge (procedural memory) and making it explicit (declarative memory).

Adults can also call upon this kind of information learned during the day. But as researcher Katharina Zinke explains, “sleep is doing that in a more efficient way in children”.

“The effects are stronger in early childhood because the brain is developing,” says Dominique Petit, the coordinator of the Canadian Sleep and Circadian Network, who has also explored the circadian rhythm in children. In practical terms, this means that “children need to sleep during the day to remember everything that they have to learn”.

Blocking out light can help you sleep and function better

“Daytime naps in young children have been shown to be really important for vocabulary growth, generalisation of the meaning of words and abstraction in language learning,” she says. “Sleep continues to be important for memory and learning throughout the lifetime, though.”

Not only does sleep help with accessing this information, it also changes the way this information is accessed. This makes brains more flexible at retrieving information (or able to access it in more ways). But it also makes them better at extracting the most significant parts of it.

“It’s actually an active process of strengthening and changing the memory trace,” Zinke says. “Memory gets transferred in a way that the most important information (the gist) is remembered.”

Clearly, for children as well as adults, prolonged sleep isn’t a sign of laziness in a language learner. It’s critical for our brains’ connections and our bodies’ rhythms.

So, following your next intense Duolingo session, it’s a good idea to sleep on it. You may be surprised the next morning by how much you’ve absorbed.