Concrete has been a major contributor to the spread of civilization. From the Pantheon built by the Romans almost 2,000 years ago to our homes today, the concoction made from water, aggregate, and cement, is why our structures can withstand the harsh elements of nature. But this seemingly indestructible material does have an Achilles’ heel – The micro-cracks that form as it dries. 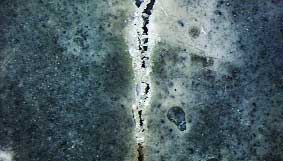 As the tiny fissures get subjected to external tension, they become larger, enabling water and other chemicals to seep in and corrode the structure’s steel reinforcement. Besides looking unattractive, this also weakens the building’s stability. While the cracks can be repaired it is a pricey and often difficult proposition especially for structures that are underground or constantly exposed to moisture.
Hence, architects avoid designing sharp corners that can break and crack with age, while engineers reinforce buildings with extra steel to ensure the openings don’t get too large. One compromises the structure’s design while the other adds substantially to the construction cost. Now, thanks to a brilliant invention by researchers from the Delft University of Technology in the Netherlands, these issues may soon be a thing of the past.
Henk Jonkers, who began working on the project in 2006, says he drew his inspiration from the human body, which can repair even broken bones. The biggest challenge the microbiologist and his team faced was finding bacteria that could survive in the harsh alkaline concrete conditions and remain dormant till they come in contact with moisture. After years of extensive research, they finally settled on the Bacillus bacteria, which thrive in alkaline conditions and produce spores that can survive without food or oxygen for almost two hundred years!
Once the right bacteria were identified, the researchers had to figure out how to incentivize them to produce limestone that would heal the cracks. After experimenting with numerous options, they settled on calcium lactate. When the moist air activates the bacteria, it starts munching on the calcium lactate and transforms it into calcite, an ingredient in limestone that helps mend the cracks.
With the natural ‘repair kit’ in place, the team’s next challenge was to find a way to mix it in with the existing concrete such that it would activate only when necessary. To do this, they combined the bacteria and the calcium lactate and packed them in tiny biodegradable capsules before mixing them in the concrete. The healing process kicks in soon after cracks in the concrete allow moisture and air to seep in and make contact with the capsules. As the dormant bacteria come alive and start to feed on the calcium lactate, the calcite produced begins to seal the openings and slowly but surely, the crack disappears.
While the concrete has been successfully keeping a lifeguard building intact since 2011, it will be available to the rest of the world for the first time, later this year. Consumers will have three options to choose from : an additive which can be added to the concrete during the initial stages of mixing, a repair mortar, and a liquid spray that can be sprinkled onto visible cracks. 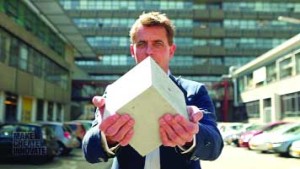 However, though the scientist has over 4,000 kg of the self-healing mixture ready for commercial use, experts believe the adoption will be slow. That’s because thanks to the high price of calcium lactate, the cost of the concrete is too high for widespread use.
Jonkers is not worried. His team is already working on a creating a cheaper solution that uses sugar instead of calcium lactate. Besides, the scientist believes that like everything else, the manufacturing costs will come down as demand rises.
In addition to enhancing the resilience of the concrete surface by 20-25% and significantly reducing the cost of repairs, the new invention will also help the environment. That’s because concrete production accounts for over 5% of carbon emissions – a number that can only increase over time. Any product that helps concrete structures last longer will go a long way in helping to keep our air clean!