Save A Boat Sail A Stone

Nafisa Tabassum# Sometimes, we humans get the urge to travel around a bit. Sitting still as a stone gets on our nerves sometimes. But it seems we’re not the only ones who feel that way. Stones themselves sometimes get the urge to sail around a bit. Fascinating, isn’t it? A miracle, a mystery and seemingly impossible. Not really.
Sailing stones have baffled geologists for years, ever since theirfirst known observance in 1915 by Joseph Crook when he visited the Racetrack Playa site in Death Valley, California.
The stones are found on the bottom of the playa with long trails behind them. Stones with rough bottoms leave straight striated tracks while those with smooth bottoms tend to wander. Sometimes the stones can even turn over and leave a different track than before.
These tracks can differ in both direction and length. Two stones that travel together may continue moving in a parallel direction, but one may even go back the way it came or take a different path. One could stop and other may continue to move on.
There have been many investigations towards this phenomenon, but no one had seen it in action until late 2014.
The stones do not move around all that frequently.  They can sit for decades without moving at all. Dr. Jackson and his colleagues fitted 15 stones with motion-activated GPS units and installed a weather station capable of measuring gusts to one-second intervals.
This experiment yielded results that showed that the movement requires a rare combination of events:
At first, the playa fills with water that is deep enough to form floating ice yet shallow enough to expose the stones.
At night time, the pond freezes and forms thin sheets of ice, which must be thin enough to float around, yet thick enough to not shatter.
On sunny days, the ice begins to melt and break up into large floating panels, which light winds drive across the playa, pushing rocks in front of them and leaving trails in the soft mud below the surface.
Previously, it was thought that hurricane winds or thick sheets of ice were likely contributors to this movement, as some of the stones were over 300 kilograms in weight.
The stones remained in motion from a few seconds to 16 minutes. In one event, the scientists observed stones three football fields apart began moving simultaneously and travelled over 60 m before stopping. 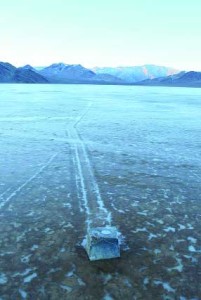 Such phenomena have observed in several different places, such as Little Bonnie Claire Playa in Nevada.
Before the very recentlyproven experiments, previous experiments were conducted to test the “ice floe” theory. Ralph Lorenz, a NASA scientist, investigated the phenomenon in 2006. To illustrate the “ice raft” theory, Lorenz developed an experiment using a kitchen-table model using a Tupperwarecontainer to show how heavy rocks might glide across the surface of the lake bed. A bed of sand is added to the bottom of the Tupperware, a rock placed on the sand, and water added until there is only a small edge of the rock sticking out. After putting the container in the freezer until the water is frozen, then removing the container and letting the ice begin to melt, Lorenz could end up with a small raft of floating ice with a rock embedded in it. All he had to do was gently blow on the floating ice sheet to get the rock to drag across the sand. Gunther Kletetschka with his NASA’s academy students showed the process of lifting a small stone in a thin aquarium and captured the lifting process on camera.

Wind and ice both are the favoured hypothesis for these sliding rocks. Noted in “Surface Processes and Landforms”, Don J. Easterbrook mentions that because of the lack of parallel paths between some rock paths, this could be caused by degenerating ice floes resulting in alternate routes. Even though the ice breaks up into smaller blocks, it is still necessary for the rocks to slide.
Further understanding of the geologic processes at work in Racetrack Playa goes hand in hand with technological development. In 2009, development of inexpensive time-lapse digital cameras allowed the capturing of transient meteorological phenomena including dust devils and playa flooding. These cameras were aimed at capturing various stages of the previously mentioned phenomena, though discussion of the sliding stones ensued. The developers of photographic technology describe the difficulty of capturing the Racetrack’s stealthy rocks, as movements only occur about once every three years and, they believed, lasted approximately ten seconds. Their next identified advancement was wind-triggered imagery, vastly reducing the ten million seconds of non-transit time they had to sift through.
On 30 May 2013, the Los Angeles Times reported that park officials were looking in to the theft of several of the rocks from the Death Valley National Park.