Victory Day Yet to come 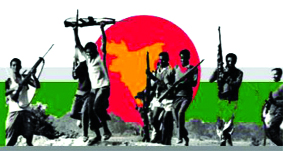 Flash Back
I would love to shut my eyes and go back to 1971, to narrate the day I saw as a tiny boy wondering on the street with thousands of enthusiast Bangladeshi.
After a long war, our freedom fighters won at the last on this very day, 16 December, we call it victory day, a day which makes us curious about our past, anxious about or present and hopeless about our future. Still we love to be proud of the memories.
In the Year 1947
This part of the globe, the then East Bengal became independent as East Pakistan , on 14th August as a province of Pakistan , a Muslim majority country with great hope, aspirations and spirit. Two parts of the country were bonded with an ideal, Islam, so, the largest Muslim country got birth.
But unfortunately, the tie was discarded gradually.

West Pakistani brothers failed to continue expected brotherly relationship as rulers. They became more a ruler than brother. They started discriminations, partiality, oppressions and sort of exploitations. As a result, mass sentiment started going against them.
Remarkable years are 1948, 1952, 1962, 1969
Language movement 1952 was the beginning of protest against the discriminations. We fought, shaded blood, got martyred and ultimately Bangla became one of the state language of the then Pakistan.
Education movement in 1962 was another historic event.
And in 1969, mass protest started against Pakistani rulers.
In the year 1970
After a long martial law rule in an independent country like Pakistan a national election took place. Awami League won the election on majority seats whereas PPP (Pakistan People’s Party) led by Zulfiqar Ali Khan Bhutto won in the West Pakistan. It was natural to hand over the power to Sheikh Mujibur Rahman. But, the then Pakistani ruler Yahiya Khan declined to do the right job.
As a result disharmony, unrest and mutiny took place.
In the Year 1971
Pakistan failed to continue as a Muslim state because of the failure of its ruler. East Pakistan became turbulent, violent and furious being deprived of its rights.
On 26th March, 1971 Independence was declared by Major Ziaur Rahman on behalf of Sheikh Mujibur Rahman from Kalurghat Radio station.
Hence the 9 month long liberation war started as a aftermaths of the black night of 25th March, a night full of blood, death and horrors.
Liberation War
Colonel M.A.G Osmani, a Veteran army personality of the sub continent organized the freedom fighters as the chief.  Whole country was divided into 11 sectors. All the sector commanders were re-known for their bravery. Among them major Jalil, Major Ziaur Rahman were noteworthy.
Liberation war continued for 9 months. From the very beginning India extended full support to our liberation war. They supplied us arms, logistic supports, more then 1,00,000 citizens took shelter in the camps in Indian land.
Over 9 months time great fighters fought a lot, more than 30,00,000 Bangla speaking people were killed, many more became handicapped, their houses were blazed, properties looted. But ultimately, their sacrifices won rewards. In the month of December, news of victory started to flow. One after another district headquarters came under the control of our beloved freedom fighters. Lastly, on 16th December the final victory came. Flags with red sun in the midst of all green horizons were being hoisted all over the country.
General Niazi, the chief of Pakistani armies in the then East Pakistan surrendered in the hand of General Jagjit Sing. Arora, at Race-Course maidan . M A G Osmani was not present in the historic surrendering ceremony.
We got a free land, a flag and many more.
Through this victory- Bangladesh a new country got birth. Our victory brought us a free land, a flag with green and red colors, a nation with aspirations.
We had a great dream, a noble aspiration, a bright future that have been cherished for long.
Mothers of the martyred freedom fighters thought of a country where no freedom fighters will lead a miserable life, no shelter less family will pass their sleepless nights, no social crime will prevail and no disharmony will make our future gloomy.
43 years gone: None kept their words
What a silly! Selucas Bangladesh!
43 years, 4 decades passed away from our life.
In the meantime many nations earned a lot, got higher GDP, tremendous prospect and became model before the world, whereas, we started a backward journey with all our prospects. Rulers changed, changed the fate of ruling party leaders, grew thousands of millioners but alas! mass people remained the same as they were.
Still we are hopeful, time will change, and future will be brighter than the past.
Come up new generation!
While old thinks about the gray hairs and dull-doomed life, youths and children play with joys, dream for green horizons.
We failed to keep up the hope of our martyrs, won the 1st position as a corrupt nation for consecutive 3 times, lost the credibility of a nation with glorious heritage- but our future is still bright.
Here we see the future reflected in the water, in the faces of our children, they are coming up with a flag, not faded, not shredded.
Don’t look to your past that makes you sad. Build yourself as a worthy citizen, full of spirit, qualities and enthusiasm. Let’s make a country- which will call the frustrated people to live here with happiness, hope, dignity and dreams.