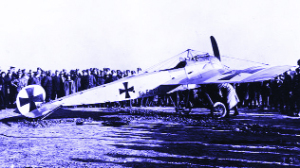 War has always spurred technological change, but in the early months of World War I a whole new way of fighting emerged: from the air. A century ago this month, two French airmen made history by becoming the first to shoot down an enemy aircraft. Within weeks, the first rudimentary aircraft carriers were taking shape, planes took to the night skies to bomb enemy targets, and the first fighter planes began stalking the skies above the trenches – and as Stephen Dowling discovers, it all happened within the space of six months…
At an airfield near Lhery in France, two Frenchmen climb into their aircraft and fly off to spy on – and bomb – German positions on the Western Front. It’s 5 October 1914, and World War I is barely three months old. The pilot Sergeant Joseph Frantz and his observer Corporal Louis Quenault are about to make aviation history.
Their bombs – modified artillery shells the duo have to drop by hand – land near the French city of Reims. Shortly after, however, the French pair encounter a German aircraft, a two-seat Aviatik spotter plane. The Frenchmen haul their Voisin III aircraft, a wood and canvas biplane with a top speed little more than 60mph (100km/h), towards the German aircraft.

Like many observation planes of the time, the Voisin is armed with a single machine gun aimed by the observer sitting in the front of the aircraft (the Voisin’s engine and propeller are located behind the crew). Aviators often bring rifles or pistols into the cockpit, taking shots at enemy aircraft whenever they come in range. Aerial duels are conducted close enough to see an opponent’s alarmed expression.
Frantz manoeuvres his plane to within 10m of the German. Quenault fires the machine gun, but after only a handful of rounds the gun jams; the Germans start firing at the French plane with a rifle. Quenault fires back with a rifle he has stowed aboard the aircraft. Suddenly, the German plane flips onto its back and dives towards the ground before exploding. Frantz and Quenault have become the first airmen in history to shoot down another plane.
The French duo’s victory comes weeks into the first global conflict to take place in the age of the aeroplane. A flurry of invention and ingenuity follows as the Allies and Central Powers vie for aerial domination. The necessity of war spurs designers and airmen to test this fledgling technology to the limits – and the lessons still apply today.
10 December 1914: The dawn of the aircraft carrier
On the eve of World War I, naval power reigned supreme; the arms race between Germany and Britain which helped tip the world towards global conflict was based around the building of ‘dreadnought’ battleships. These ships – massive, heavily armoured and slow moving – were designed to take on other heavily armed ships and dominate shipping lanes, though changing technology was soon to make these behemoths obsolete. Submarines – already used to devastating effect in the American Civil War – were becoming more sophisticated, while the first few months of World War I introduced another threat: aircraft.

On 6 September 1914, a Japanese aircraft attacked Austro-Hungarian and German ships in the Chinese port of Tsingtao, the first aerial attack against naval vessels. Other nations quickly took note of this novel approach.
To stage these sea attacks, it became apparent that planes would have to launch from the ocean. Aircraft capable of taking off and landing on sea were already in service, but their short range meant they were limited to operations from bases with fuel and repair facilities. Navies began converting ships to become seaplane carriers, capable of sailing with aircraft on board. But these designs were rudimentary, the aircraft often being lashed to the deck and exposed to the elements. On 10 December, however, a new vessel was completed – the HMS Ark Royal, the first ship designed with internal space to store aircraft.
It was an important step towards the aircraft carriers that would change the shape of naval warfare in coming decades.

“The commissioning of HMS Ark Royal, a seaplane carrier, was an important marker in the development of naval air power as it allowed the Royal Navy to deploy aircraft in support of the fleet,” says Ross Mahoney, the aviation historian at the Royal Air Force Museum and secretary of the Royal Aeronautical Society’s air power group. “This marked the start of an evolution that led to the aircraft carrier that would eventually replace the battleship as the major ship in the navies across the world.”
21 December 1914: The first night bombing raid
Frantz and Quenault’s historic victory does not change the nature of aerial warfare instantly. Most of the aircraft in the skies in 1914 are there to observe enemy positions, with some carrying modest bombloads. Already, the first strategic bombing raids – attacking military and industrial targets far behind the front line – have taken place. In the first week of the war, German airships had bombed Antwerp and Liege in Belgium. So, in September 1914, the British strike back with raids on German airship stations at Cologne and Dusseldorf, and in November three of their Avro biplanes fly 125 miles to launch a daring raid on an airship factory on the shores of Lake Constance in southern Germany (the raid does little more than damage a workshop and break a few windows).

But in December, one British airmen decides to try a new trick; bombing at night. Aircraft are already having to contend with strong air defences – modified artillery guns make life difficult for spotter planes flying at their normal altitude, while machine guns and rifle fire are a danger closer to the ground. But at night attacking planes will be far less visible, and theoretically in much less danger. Wing commander Charles R Samson has already made history, becoming the first British pilot to fly an aircraft from a ship in 1912. Now he climbs into his French-made Farman biplane, and takes off to bomb German targets in the occupied Belgian city of Ostend. The Farman has an open cockpit and the flying suits of the time gave little protection form the bitter cold.
“This would have been difficult as navigation by night had been given little consideration at this point in the war,” says Mahoney. “It was, as with so many aspects of early aviation, experimental.”
Samson recounted his raid in a newspaper article written years after the war.  “Now and then I used the pocket flashlamp in my breast pocket to glance at the dials and gauges. After a long while the Farman climbed to 5,000ft and as the Germans had all their lights burning, I could easily pick out Ostend and Zeebrugge.” The Farman glided into the city, the streetlights burning on the roads below. “While I toured calmly above the roofs, gunners flung shell after shell into the night. Men dashed that way and this, and then one of their own searchlights lit up a battery of big guns. The target of a lifetime!” Samson dropped his bombs and then evaded furious German fire to return to base. The night skies had become a weapon themselves, a cloak of darkness to hide aircraft.
1 April 1915: The first fighter plane scores its first victory
In the daylight, meantime, aviators are struggling to find new ways to turn their lumbering wood and canvas aeroplanes into hunters. Air combat is a haphazard affair, with pilots having to manoeuvre their aircraft so their observer could shoot, or they could use a machine gun firing above the arc of their own propeller; a difficult feat to achieve while also flying a plane. The ultimate aim is to mount guns firing forward – the pilot only had to “aim” the plane, making it much easier to shoot down enemy aircraft. But in order to fire the guns they have to be within the pilots reach – and that meant they have to fire through the propeller, with potentially disastrous results as they were made of wood. “The challenge of firing through propellers had been considered as early as 1912 but remained a problem until 1915,” says Mahoney.

It is French aviator Roland Garros who comes up with the first practical solution. Garros fitted metal wedges to the inside of propeller blades so that bullets would be safely deflected away should the bullet strike them. Garros took his Morane Saulnier plane into combat for the first time on 1 April 1915, shooting down a German Albatros observation plane. “These designs highlight the experimental nature of military aviation in the early phase of the World War I and some of the ideas that emerged,” says Mahoney.
“Mounting the deflecting wedges on the propeller blades was obviously a crude solution, but it was a conceptual breakthrough in terms of air-to-air combat,” says Peter Jakab, the chief curator at the National Air and Space Museum in Washington DC. “It changed the way pilots engaged enemy aircraft.”
It is by no means the end of rapid advances. As the conflict deepens, aircraft designers solve more issues. Garros’ technological advantage is short lived. In June 1915, German pilots appear flying a new type of fighter plane, one whose guns can fire through the arc of their propeller blades thanks to synchronisation gears that ensure bullets always pass between the blades; it’s a much more effective method. The Fokker Eindecker monoplane (which can be viewed at London’s Science Museum) is such a technological leap forward that its period of aerial supremacy over the Western Front trenches is known as the “Fokker Scourge’. It is several months before allied pilots are able to redress the balance.

Other aircraft are coming into service, many of them designed for a particular job, rather than being jack-of-all-trades. “The key developments in air power in World War I were the establishment of specific missions, and aircraft specifically designed to carry out those missions,” says Jakab. Aviation designers started creating aircraft for more defined roles. Aircraft became faster and stronger, with more powerful and reliable engines.
“In this sense, World War I was the laboratory or crucible for the establishment of tactics and technology for air power that became central to military force deployment in World War II and after.”
So what does this episode in history tell us? War often takes seemingly benign technologies and turns them into killing machines, yet at the same time, conflict accelerates the pace of innovation, allowing for wider benefits when peace returns. There’s no doubt that fighting in the air created a chilling new chapter in the history of warfare, but without it, many of the benefits of aviation we rely on today would not have happened as quickly. It helped us create faster, more robust aircraft that could fly further for longer – and eventually take passengers and all manner of goods around the globe. In other words, the innovations rushed in to fight a world war ended up bringing the world closer.