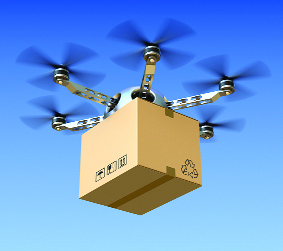 The U.S. military developed drones for spying, but scientists are now finding ways to use these flying robots in research and conservation
Thomas Snitch is no ordinary spy.
On a May night last year, Snitch gathered his surveillance team in a wild corner of South Africa. They waited until well after sunset before stealthily beginning their mission. Using a catapult powered by a bungee cord, the experts launched a small airplane over the deep and dark landscape, thick with acacia trees sporting 5-centimeter (2-inch) thorns.
Their robotic aircraft — or drone — is about as long as a bicycle and sports a 2.4-meter (8-foot) wingspan. In recent years, scientists have begun putting drones in the air to do many kinds of groundbreaking research. Drones carry no pilot, passengers or crew. They are often small and light. Some fly like an airplane, others like a helicopter or a blimp. Drones may fly autonomously (along a preprogrammed path) or under the control of a pilot on the ground.
That night in South Africa, Snitch and his team flew their drone by remote control over Kruger National Park. High in the sky, and under the cover of darkness, the Terrapin 1 flew undetected over the landscape. Though unseen, it could see perfectly. The experts scanned the ground using a special camera attached to their drone. This camera was designed to see anything that gives off heat, including elephants, rhinos — and people.
Snitch was looking for all three. “We’re trying to own the night,” he says. The team’s mission was simple: protect the animals from poachers — illegal hunters — all the while huddled inside a hut tucked in the African bush. It was no easy task. But it was an important one. Poachers kill 1,000 rhinos a year in South Africa. That translates to one every 8 to 9 hours.
Monitoring endangered species, including the rhinoceros, is becoming an increasingly common use of drone technology. Snitch, a computer scientist at the University of Maryland in College Park, combines a drone’s view with math and computer software to find and catch poachers before they strike.
The list of other uses in science for such flying spies in the sky is long and growing. In April, archaeologists reported they had used drones to find the buried remnants — including houses and walls — of a 1,000-year-old settlement in the New Mexico desert. In May, storm-chasers sent a drone into a supercell. They wanted to learn more about twisters, and this type of storm cloud can produce a tornado. In July, the state of Washington received federal government approval to use drones to monitor wildfires.
Drone researchers are just getting started.

Spying on everything
The U.S. military has flown spy drones over battlefields in foreign countries since the 1990s. (Dozens of other countries now use them too.) In the early 2000s, military drones became lethal. They began carrying and launching powerful missiles. Military drones tend to be big and expensive: A Predator drone measures as long as a school bus and costs about $4 million. These drones can fly as high as piloted jet aircraft and fire missiles. Between 2009 and 2013, the U.S. government spent between $25 billion and $30 billion on drone technology, according to a study by the U.S. Geological Survey (USGS).
More recently, smaller and cheaper drones have become widely available. A drone suitable for research usually costs at least $1,000. Hobbyists can buy simpler models for just a few hundred dollars. Amazon, the online retailer, sells drones. Next it wants to use drones to deliver orders. So does a beer company in Minnesota and a pizzeria in Syktyvkar, Russia. Martha Stewart uses a drone to take aerial pictures of her farm in upstate New York.
USGS researchers are beginning to use drones retired from warfare. For example, in 2009, the agency received a shipment of AeroVironment Raven RQ-11A drones. These had been used for military operations in Iraq and Afghanistan before better and more expensive models replaced them.
“Those were going to be destroyed. But we said, ‘We’ll take them,’” recalls Jeff Sloan. He manages the agency’s Unmanned Aircraft System Project Office in Denver, Colo. Basically, he explains: “We recycled them.”
Since then, his agency has used the Ravens — which have fixed wings and a propeller  — for a variety of projects. For example, USGS scientists sent their drones to spy on — and count — sandhill cranes as they migrated through the San Luis Valley of Colorado in 2009.
For now, Sloan says, USGS drones only capture visuals of the ground below. They fly cameras that capture images in natural color. Most also host video cameras that hunt for heat. Anything that emits heat — from vehicle engines to human bodies — produces infrared light. Thermal cameras can detect that infrared light, which the human eye cannot. “The cameras push beyond what the eye can see,” he explains.
When using a drone equipped with a thermal camera to track wildlife, Sloan says that scientists often prefer to fly at night or early in the morning. The animals are calmer then, he explains. The warmth of their bodies also stands out better against the cooler surroundings. “Birds show up like rice on a piece of black paper.”
And video is just the beginning. Other researchers have come to USGS with big ideas. For instance, Sloan says he’s been talking to scientists who want to mount laser-measuring devices on drones. These light detection and ranging, or LIDAR, systems can map the shape and contour of the landscape by firing laser pulses at the ground. Sloan says that drones could be a versatile tool in many a scientific toolbox.
“It’s amazing what they’re able to handle.”

Farming from the sky
Drones have enormous potential to change the way many different people work, since these aerial robots can collect huge amounts of data in a short time, says Rory Paul. This engineer’s company, Volt Aerial Robotics, builds drones in Chesterfield, Mo.
Almost any kind of sensor can be attached to a drone to make measurements, Paul says. For example, in 2011, a power plant in Japan was hit by a tsunami (a series of powerful ocean waves) and began leaking radiation. The area is still too dangerous for people to enter. But scientists have sent in drones to measure radiation levels there. And in 2013, NASA scientists fitted three drones with electronic sensors to sniff for sulfur dioxide while flying over the rim — and through the plume — of an active volcano in Costa Rica.
“We haven’t even scratched the surface,” says Paul of all the applications for drone technology. Farmers use his company’s drones to quickly and efficiently inspect their crops.
In the fall of 2012, Paul led a project to use drones to spy on a soybean field in Iowa. The aircraft can fly low enough to give a farmer a close-up view. That can reveal any insect damage that requires the application of pesticides or some other treatment. By zipping back and forth overhead, the drone also saves a lot of tromping across fields.
“If you have 600 acres of corn and walk through 200 acres three times a week, you won’t hit the same spot twice,” he says. A drone could collect visuals on that area in a matter of hours, providing “a much bigger overview of what’s happening.” And it won’t damage any plants along the way.
Paul notes that while drones can help individual farmers, they may not be useful on a large scale. He says that using drones to survey all the farmland in the United States alone would be too expensive. Big problems, such as figuring out how to grow enough food in the right places to feed the world, would be better solved with more complex technology — including smarter satellites that peer down on Earth from space.
Still, drones do offer the potential to increase crop yields, Paul says. Farmers can use images captured by a drone to identify plants whose color, seen in the infrared, might reflect the use of too much or too little fertilizer. Farmers could then respond by fine-tuning the way they care for the plants in that corner of their fields. Soon, when cameras are even better, drones may begin to image individual pests.

Flushing out poachers
On that night in South Africa, Snitch and his team were searching for a different kind of pest.
Ruthless poachers, often armed with guns, roam the park after dark. They kill rhinos for their horns and elephants for their ivory tusks. Both can be sold for big bucks. Snitch thought that if the drone could spot the animals, it might reveal the presence of any suspicious characters nearby. And if it did spy someone, he could call a nearby park ranger. That gun-toting ranger could then intercept the would-be poacher to spare the animals.
The night of May 25, 2013, was the drone’s first flight in a week of testing. Its battery would keep it airborne for only three hours. Outside the hut where Snitch and his team waited, the night was alive.
“It was really scary,” he says. “There are leopards, hyenas and snakes out there. It was pitch black in the heavy bush, and you can’t see much.” One night during the experiment, he says, elephants brushed up against the side of a nearby vehicle. On another, a pride of lions watched the scientists from about 20 meters (66 feet) away.
The scientists weren’t watching the forest immediately around them. Gathered together indoors, they were watching a computer screen showing real-time footage from the drone. Snitch says it’s not easy to find animals or people by looking at random. The park is huge, covering more ground than the U.S. state of Connecticut. And poachers have the advantage. They know the area and are smart about finding animals.
But Snitch’s strategy didn’t involve searching at random. He had a secret weapon: math. He and his colleagues designed computer programs that used mathematical formulas to predict where the animals would roam. This is where the poachers might be headed. And that’s right where Snitch’s team sent its drone.
“I didn’t have to find a poacher, I had to find a rhino,” he says.
Without a way to accurately predict the best place to look for animals, he says, the drone would have been flying blind. The good news: His team’s technology worked. The scientists spotted a small group of rhinos that first night. They also spotted a suspicious car nearby, parked on a rough road. Snitch called in the rangers; the rhinos survived the night.
About 100 years ago, rhinos were plentiful in Africa and Asia. But because of extreme poaching, some species have gone extinct. The five remaining species are all endangered, and people like Snitch are trying to catch the poachers before the animals vanish. Most rhinos are poached from Kruger National Park. But during the week that Snitch and his team spent testing the drone, no rhinos died in the area.
His week in Africa showed that drones and computer programs together might fend off poachers. Next, he’ll be flying drones in Kenya, watching after elephants. Later, he may head off to Asia — to track and protect endangered tigers.
“I’ve got my hands full,” he says.
The key to success, Snitch explains, is to put drones where the poachers are most likely to show up, no matter what they’re after. And that means using drones smartly and efficiently.
“With good science and really great math,” he says, “you can do things that people say are impossible.”