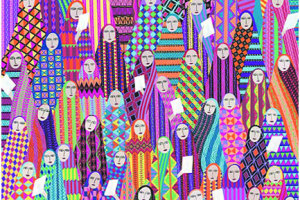 The solo exhibition ‘Fractured Spring’ is the latest in Helen Zughaib’s ongoing series about the implications of the Arab Spring.
Helen Zughaib new work consists of paintings, calligraphy and installations, most of them diptychs, triptychs or multiple pieces, “fractured” in some way to indicate her concern with the consequences of the movements across the Arab world. Using gouache and meticulous technique, she explores repetitive calligraphy, superimposed on her signature veiled female figures, but the peace mantra is often now interrupted in her work.
In ‘Veiled Secrets’ she superimposes hand-inked repetitive Arabic calligraphy “there are many secrets under the veil,” over an abaya clad figure, with the words forming an enveloping veil over the figure. This image is part of her series exploring the perceptions and misperceptions of veiled women by the West.
Also new is exploded imagery á la Warhol, with such works as ‘Chiclets’ exploring the Arab world’s fascination with branding in the face of poverty and urban chaos. In this triptych, she has painted large-scale, 2×3 foot photo-realistic replicas of Chiclets chewing gum boxes, in Arabic and English, set against a 6 inch x 8 inch collaged and painted newspaper clipping of a young girl on a Beirut street selling Chiclets in the traffic.

The triptych ‘di/as/pora’, with its female figures moving through empty space alludes to the displacement that revolution, war and chaos in the Arab world has caused for ordinary people. Much of Zughaib work for this exhibit references Syria and Lebanon, where she was born and still has familial ties. She creates a series of tiles patterned after traditional Syrian floors, Pieces of You, interspersed with blanks, as gentle homage to the Syria of warmth and family homes, now in ruins.

In her gouache painting ‘Generations Lost’, multiple images of women clad in her signature multi-hued and patterned dresses are holding photographs, depicted in the ghostly pale grey of a negative, of lost loved ones. The colorful mélange belies the tragic loss these people have suffered.

Many of the other works in the exhibition pay homage to the lives fractured by the ongoing crises in the Middle East, from Palestine and Syria, to Egypt. An installation piece titled ‘Spring Memorial 3’ references her 2 previous memorial installations, where she used silk flowers to cover a dishdasha and a kifaya to recognize the dead in the Arab Spring clashes. In this 3rd installation, she has drawn in chalk, larger than life-sized, on a black wall, the classic police outline of a deceased victim at a crime scene. Inserted into the chalk outline are dozens of white ceramic poppies (which she made).
Helen Zughaib has recently exhibited in ‘Lure of the Eye’ in Sharjah, UAE and has upcoming exhibitions at the Arab American National Museum in Detroit, in Baltimore, MD and in Paris and Amsterdam. Her work is in national and international collections including the White House, Dept. of State, Library of Congress, and the World Bank.
The exhibition at Gallery Al-Quds runs from September 5 through October 17, 2014.