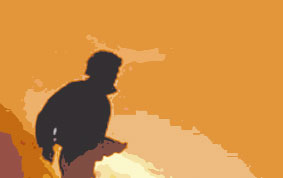 Since my childhood, I have been afraid of small, confined spaces and furiously fled from such places. Later, I understood that this condition was known as claustrophobia, but I have never been able to master it. Now, unwillingly, I had to enter a closed narrow space. I was wrapped in a shroud and lying in a long coffin. I could hear the voice of the people around me quite well. And although my eyes were closed, I could see them clearly.
“He died so young,” they said and added, “He had so many things to do.”
It was true that I had left a great deal of work half done; I had not set up a good business for my son, completed the payment of the installment of the car and TV. Winter was around the corner, but I had not prepared the leaking roof or bought the fuel. Now the dream to establish a big farm and employ my friends had dispersed to nothing.
Suddenly, I was irritated by a noise that, as if coming through a microphone, echoed in every remote cell of my brain:
“It is all over!”
I wished it had not been all over, I did not know why the accident happened. I was a good driver.
As I was trying to recall the events that had taken place, I realized that my friends surrounding the coffin were covering it by putting the lid over me. No matter how much I wanted to shout, I could neither move nor speak. I was in complete darkness and turned my eyes towards the light coming from the gaps in the coffin.
I said to myself in horror, “Oh my God! What am I going to do now?”
Seized with fear, I could think of nothing. Later, I was lifted onto their shoulders as they began to carry the coffin. Hearing the noise coming from outside, I understood that it was raining. The noise of the raindrops mingled with the creaking of the coffin. We must have gone to the mosque for the funeral prayer.
I remembered that although the mosque was so close to my home, I had never paid it a visit. I had planned to start prayers after the age of fifty and I would quit the bad habits everyone complained about. If the accident had not occurred, I would have been a good fellow.
The voice that I heard before repeated, “It is all over!” A little later my funeral prayer was completed. The imam was asking people’s opinion as to “what kind of character I was.” I knew that among them were some eight or ten persons who did not give an opinion. I accepted that I had given them some evil and harm, but if the accident had not occurred, I would have been pleased to make amends and duly compensate them for the equivalent of any harm done. After the prayer in the mosque was completed, I was lifted onto the shoulders again. Due to the inclination of the coffin, I understood that we were on the road uphill to the grave. I was aware that it was pouring rain and the rain was seeping through the cracks in the coffin onto the shroud, making it damp. Nevertheless, I tried to listen to the conversations coming from outside. Some of my friends were talking about the stagnation of the market; some were commentating on a Western film they had seen the previous evening on TV. Another, carrying my coffin whispered, “What a bad day the deceased chose to die, we have got wet through and through.”
I could not believe what I heard and I thought that I must have misunderstood. Were they not the ones for whom I had sacrificed my wealth and my health?
A little later my journey finished and my coffin was put down on the ground. The lid was removed again. The arms holding my weak and lifeless flesh put it into the hole where a little water had collected. Lying on the ground, I looked around:
“Oh my God, was it a grave?” I did not know why I had not thought until then that I would be buried in a grave. No one heard my silent cries, and my best friends seemed to be competing each other to cover my body with thick boards.
I was in complete darkness once more. I began to pray with all my cells, “Oh my merciful God,” I said, “Is there another chance to be a real servant of Yours?”
The same voice repeated, “It is all over, everything has finished.”
I was shaken by the noise of the earth. With a final effort to get up, I opened my eyes. I was lying on my comfortable bed and it had all been a nightmare. One of my neighbors, a doctor, was standing at the bedside.
“It is all over,” he repeated. “You are all right.”
I sat up slowly from the bed. I was dripping with perspiration, feeling I had lost twenty kilos in weight. It was raining heavily outside and the whole house was shaken by thunder.
While I was trying to recover myself in front of the bewildered eyes of the others, I whispered, “Oh my Lord, a thousand thanks to You. What would I do if You had not given me another chance to be an obedient servant to You?”