Mystery of the ‘sailing’ rocks Solved 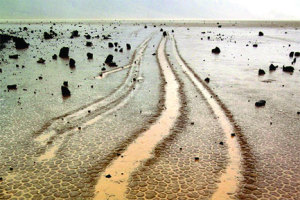 Trails etched into the ground crisscross the landscape in California’s Death Valley National Park. The scored paths occur in an area known as Racetrack Playa (PLY-uh). (A playa is a dry lake bed.) The tracks have puzzled scientists since they first discovered the phenomenon more than 60 years ago. The rocks appeared to have been gouging out the ground. But how? Now, with the help of modern technology, researchers have finally solved the mystery of what causes rocks to plow those long trails: ice.
Death Valley isn’t home to much life. That’s not a surprise for an area that gets less than 5 centimeters (2 inches) of rain each year and where summer temperatures regularly top 49° Celsius (120° Fahrenheit). Such harsh weather had made it unlikely that the stone movers were alive. What’s more, no tracks — by animals or people — accompany those strange rock-trails.
Scientists had proposed a number of possible explanations: high winds, dust devils, water and ice. Everyone agreed that some combination of water and wind must be involved. Water covers the playa during the rare rain events, creating a shallow lake. A muddy bottom would make it easier for rocks to slide.
However, Racetrack Playa is very remote. And its rocks rarely move. A very specific set of conditions must be required — but no one knew what those were or when they occurred. That made it difficult to catch the stones in mid-slide.
But a team of scientists recently found a way to spy on the rocks.
Richard Norris is a geologist at the Scripps Institution of Oceanography in La Jolla, Calif. (A geologist studies Earth, including its rocks.) His team outfitted 15 rocks with GPS instruments. GPS, short for global positioning system, uses satellite signals to calculate positions on Earth. The team left their GPS-tagged rocks on the playa among the other stones. They also installed a weather station and several time-lapse cameras on the ridge surrounding the lake bed. Those cameras took a photo once every hour during the months when rain and snow were most likely — November to March.
After one rain, two snows and a number of nights with sub-freezing temperatures, the scientists hit the jackpot. They even happened to be at the playa when it happened. More than 60 stones moved across the shallow, 10-centimeter (4-inch) deep pond at speeds of 2 to 5 meters per minute. Many moved in parallel, even when shifting direction.
The mass movement occurred on a sunny day when a thin, floating ice sheet that covered the pond began to break into smaller pieces. A steady, light wind blew ice fragments against rocks jutting out of the water. This increased the surface area on the upwind side of the stones. Both wind and water pushed against the larger area, moving the stones forward, much as sails can move a boat.
The researchers published their findings August 27 in PLOS ONE.
Perhaps the most surprising aspect of those sails was the thickness of the ice — or, rather, how thin it was. The ice sheet was only 2 to 4 millimeters (0.08 to 0.16 inch) thick when the rocks moved, Norris says. Yet that windowpane-thick ice was strong enough to force stones weighing as much as 16.6 kilograms (36.6 pounds) across the muddy lake bottom. In some places, ice fragments piled up against the rocks. “However, we also observed ice just shoving the rocks without making a substantial ice pile,” he adds.
As for rocks moving along parallel tracks, Norris says the movement could have occurred when those rocks were stuck in a larger ice sheet. But even when the large sheets began to break up, smaller ice fragments (and the rocks they rammed into) might have followed parallel paths if the wind pushed them in the same direction.
Paula Messina, a geologist at San Jose State University in California, was not involved with the study. “It’s exciting,” she says, “that technology has reached a point where we can solve the mystery of the Racetrack rocks. That’s something scientists couldn’t have done even a few years ago.”