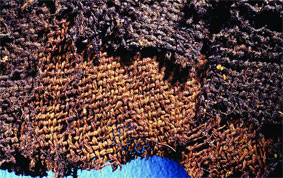 Ancient Egyptians started building pyramids more than 4,500 years ago. By then, people were already preserving the dead as mummies. In fact, new research now suggests mummies may predate those giant stone tombs by at least 1,500 years.
That’s a conclusion scientists reached after analyzing samples from two Egyptian cemeteries. Those samples — which may be more than 6,000 years old — included fragments of linens and human skin.

Archaeologist Jana Jones works at Macquarie University in Sydney, Australia. Her team’s newly analyzed samples came from a prehistoric community that farmed and raised animals in the land between the Red Sea and the Nile River. These people wrapped their dead in linens. But first, they soaked that fabric in a mix of oils and resin, a sticky substance from plants.

Thousands of years later, Egyptians used much the same mix to mummify bodies that they placed in the pyramids, Jones’ group notes. The team reported its findings August 13 in PLOS ONE.

Embalming a dead body protects it from decay. In addition to resin and oils, the ancient mixture used to mummify bodies also may have included sugar and wax. Those substances would have helped preserve the bodies, the scientists say.

Jones and her co-workers are challenging a popular notion about the origins of mummies. Many researchers had suspected that the ancient Egyptians began preserving their dead after observing that bodies left in the desert did not decay. The extreme heat dried them. But the new study suggests instead that mummy-making began with wrapping bodies in resin-soaked cloth.

Not all scientists agree that the new findings mean scientists have to rethink the origins of mummies. Donald Redford is one of those skeptics. An archaeologist at Pennsylvania State University in College Station, he says Jones’ team doesn’t know why the ancient community shrouded its dead in linens treated with the oil-and-resin mix. The treatment could have had another purpose than preserving the bodies.

The earliest confirmed efforts to preserve bodies date back only about 4,600 years ago. That’s around the time when the first pyramids were built, he says. He told Science News: “I know of no other evidence that embalming had even dawned on the thinking of Egyptians” before that time.