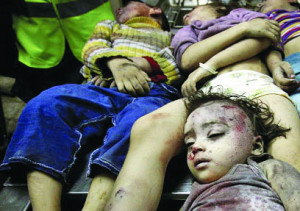 When sea beaches across the world earn millions of dollar for nations,Gaza beach earns blood for Palestinians. When sunbath goes on in the beaches including Cox’s Bazar on the Bay of Bengal, tiny boys and girls bloodbath on the Mediterranean Sea beach. When beachgoers enjoy music from their MP 3 or mobile phones people there hear deafening sound of missiles of the Israelis. Civilian Palestinians are overwhelmingly pounded by the Israelis.
It is very common for boys and girls of acommunity of 4000 fishermen of Gaza City. From time immemorial the sea waves are crashing against the beach and people around the sea have made a living out of it since the dawn of human history. Egyptians on the Sharm al Sheikh Beach and Palestinians on the Gaza beach are no exception to this.
On July 16, 2014 four Bakr boys playing on the beach in the lovely afternoon. It was a really enjoyable relief of being cooped up at home as Israel continuously bombarding the biggest prison in the world. The cousins thought that nothing would happen to them. But they experienced the last sunset of their life.In this age of military high tech the Israeli army failed to kill four cousins with one missile attack. The first blast hit a nearby shack killing one boy instantly but with the help of radar the nuke-powered Israeli army targeted the three others fleeing the spot. But the F-16 aircraft shelled the tiny three toddlers to litter the beach sand of Gaza City.
One was charred, missing a leg and another lay motionless, his curly head intact, his legs weresplayed at unnatural angles.

Mohammad, Ismail, Zakariya, Ahed
The four dead boys (Mohammad, 11, Ismail, 9, Zakariya, 10 and Ahed, 7, an only son with seven sisters)came quickly to symbolize how the Israelisare killing one innocent child in every three days since 2000. So one, for sure, can predict that in next three days a Palestinian child will fall prey to the missiles or bullets of Israeli army or armed civilians.A Ministry of Information in Ramallah reveals that 1518 children were killed since September 2000 to April 2014.
As the afternoon turned golden, Tyler Hicks, a New York Times photographer, was in his hotel room facing the beach. He heard “a loud, close blast,” he said. From the window, he saw the shack burning and a boy running. He turned to grab his equipment, then heard another blast. There was a body on the beach. Mr. Hicks ran.
“I saw that boy running,” he said, “and by the time I had reacted he was already dead. That’s the image that will stay with me.”
Men came running, the first to arrive raising his hands to his head in anguish. In such tight neighborhoodspeople know what family these boys are from and who their parents are. The boys were carried to the nearby Deira Hotel, where foreign journalists gave first aid to other wounded children.
Later, a little girl with curly hair, a sister of one of the boys, wandered outside the family house, sobbing, the adults too overwhelmed to tend her. “They were children,” Ms. Bakr, the aunt, said. “They just want to play and study and live a good life.” Men carried the boys past on stretchers. One dead boy stared skyward, eyes still bright, his features fine and delicate. The wailing became screaming. Throughout the funeral, Mohammad’s father held the boy’s hand to his lips. Asked what he would miss most about his brother, Ramzi looked at the ground. “Kul,” he whispered in Arabic. “Everything.” In the chaos of an extended family milling about in mourning, there was some confusion about the ages. “Not today,” she said, then reconsidered, adding, “Today, too.” Her nephew’s blood, she reasoned, should not be in vain.

Counting the Cost of Catastrophe
Over 410people, including more than 83 children, have been killed in Israel’s air assaults in Gaza and 3000 people were injured.Over 60000 people are displaced of course one Israeli and 18 solders were killed in rocket attack inside civilian areas in Civilians make up about 75 percent of the Palestinian deaths, according to the United Nations. Over 72000 children need traumatic treatment in the Gaza City where 900000 people need water, according to Aljazeera television till the wee hours of Monday.
But Israel’s military, which is represented by almost every family of the country,has acknowledged that about half the people killed so far were civilian, according to Israel Radio.

Cycle of Horrendous Invasion
It has got a cycle of horrendous invasion. Second intifada in 2000, Gaza invasion in 2008 in wake of Hamas coming to power by popular vote and now in 2014 after the unity government between Fatah and Hamas was form to practice democracy. But the hope to democratization was dashed. As Israel was dissatisfied with the unity among the Palestinians so to the great shock of the world the only nuclear power started pounding on people’s choice of democratic initiative. But the Israeli authorities are claiming that they are assaulting the targets to cripple Qasam Brigade’s power of rocket launching inside Israel. One of the highest powerful military in the world wants its neighbor to be without military. Someday there may be hiatus in place most likely before eid and another war within next five to seven years.

Moles, Earthworm, Tunnels, Iron Dome Interception System
Moles, earthworm or other creatures live underground could have envied their new inmates underground. Moles are small cylindrical mammals adapted to subterranean.Diametrically they are happy as the new underground creatures are not sharing their food rather giving some while carrying food and medicine using the underground tunnels. I am talking about the tunnels used by the 1.8 million Gazans in the 13 km Rafa border to buy food from Egypt. Not government of Sisi but the common Egyptians are happy to help their Gazan brothers. So General Sisi joins Israeli Prime Minister Netanyahu to crush 1700 tunnels which are lifeline for the sliver of land stretching on 360sq kilometer.
Human Rights Watch condemned Israel which had repeatedly struck civilians and their property without a clear military purpose and called on it to end unlawful attacks. Israel has hit houses, offices and farmland in Gaza with F-16 airstrikes, missiles fired from Apache helicopters and shelling from naval gunboats.
In response to high tech ground, water and air invasion Hamas and allied militants have fired more than 1,000 rockets into Israel since July 8. Most rockets have fallen in open ground or have been destroyed by Israel’s Iron Dome interception system. What an ironic balance of war power of Israel army which get three billion dollar in US aid and 8000-man strong Qasam brigade of Gaza City.

Faris Odeh
Faris Odeh was one of the Palestinian boys who turned out to be the idol of resistance for the Palestinians. Heshot dead by the Israel Defense Forces near the Karni crossing in the Gaza Strip while throwing stones in the second month of the Al-Aqsa Intifada.A picture of Odeh standing alone in front of a tank, with a stone in his hand and arm bent back to throw it, was taken by a photojournalist of the Associated Press on October 29, 2000.Ten days later, on November 9, Odeh was again throwing stones at Karni when he was shot in the neck by Israeli troops. The boy and the image subsequently assumed iconic status within the Palestinian territories as symbols of resistance to the area’s occupation by Israel.

Mohammad al Durrah
Mohammad al Durrah was another iconic character. He was the victim of same intifada in 2000. Ultimately he became another posterboy.Amid widespread rioting throughout the Palestinian territories Jamal al-Durrah and his 12-year-old son, Muhammad al Durrah sought cover behind a concrete cylinder and killed by Israeli soldiers. The shooting Israelis denied. The footage, which lasts just over a minute, shows the pair holding onto each other, the boy crying and the father waving, then a burst of gunfire and dust, after which the boy is seen slumped across his father’s legs.
In the last spate of ground and air invasion Palestinian policehead lost 18 of his family members and friends in an air strike.The killings recalled an episode in June 2006 when seven members of a family, the Ghaliyas, were shelled as they enjoyed a day there. The Israelis said they had shelled areas where militants had fired rockets into Israel, but denied that the shell that killed the family was theirs. No Palestinians believed the denial, and the anger fed an escalating cycle of violence.

Killing of News
It became the talk of the town when Reshma Akter was rescued after 17 days in the rubble of Rana Plaza in Bangladesh. Many national and international media were not convinced by the clean dress, paired nails and fresh look and termed the miracle as a hoax to cover up the government failure. People in Bangladesh believe such myths which end up in smokescreen and vague. It is human nature whenever any of his sin or crime is exposed to public sight human wants to hide it distracting others attention in different ways even if it is in an unpredicted one. Creativity of the sinner pays off here. The more the criminal is creative the more the way of diverting people’s attention to something else is crafty.International players and the political and economic shenanigans are no exception to that rather they use the ploy shrewdly. Look back to the incidents before the 9/11. Enron Corporation Scandal was revealed.The presidential papers of Ronald Reagan and Vice President George Bush were delayed the release for 90 days and pushed the date back into September, 2001. On November 1, 2001, Bush issued Executive Order 13233, limiting public access to the records of former U.S. presidents. And on September 9, 2001, two days prior to 9/11, Ahmad Shah Massoud was killed by a suicide bomber at Khwaja Bahauddin, in Takhar Province, northeastern Afghanistan. Similarly all the narratives about 9/11 were not taken as total truth.Unnatural trading in the share market took place during that time which also coincided with US force’s drill. The 9/11 took place resultantly all these things evaporated.

Who is the beneficiary of Malaysian Airlines?
When Gaza started to burn everyone’s attentions were attracted to the hoi polloi to divert their attention something of media importance was put in place and that is grounding Malaysian Airlines MH 17 by Russia (which deported thousands of Jews over the last century). The incident and also to cater for the news feed for 20000 channels, nearly 10000 dailies and to add some pages to already existing one trillion internet pages. And for the scholarly people who are writing two books and more than one journal every minute had got their own food for thought and writing and the issue of Gaza invasion died down. So Israel is prime beneficiary of shooting down of Malaysian Airlines with nearly 300 passengers dead.
Last but not the least no one sees any sustainable solution to Israel-Palestine conflictapparently. The present hegemony of these nations are failing to do so. But today’s Palestinian teens will turn out to be the tomorrow’s trendsetters of resistance movement against Israeli apartheid.