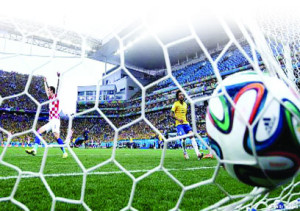 Though the Bangladesh football team is unable to participate, and though we are mostly cricket fans, many of the Bangladeshi houses are now divided into two teams: Brazil and Argentina. Our rooftops are decorated with flags of our favorite teams. The roadside stores are flooded with jerseys of various shapes and sizes. We are ready with a midnight bowl of chickpeas and puffed rice to enjoy the greatest show on earth- The FIFA football World Cup 2014. We surely hope there will be no electricity disruptions during the matches.
Dressed like the Pope and with a flashing smile, a Polish die- hard fan of football was noticed by many. He has not missed a single Euro since 1980. He wishes all the players would make goals, not war.
When the Brazil national team does not play, Brazilians support others. One Brazilian wore the Argentine blue jersey over Brazil’s yellow one while supporting Argentina against Bosnia. Legendary Serbian coach Bora Milutinovi knows the World Cup like the back of his hand. He has coached five different teams and he currently supports Costa Rica. On the other hand, Bosnian supporters were so few that they became VIP guests in Brazil.
There are 12 different venues for this year’s World Cup. Amongst these, seven are new, while five are refurbished for the football show. The venues are: Rio de Janerio, Brasilia, Sao Paulo, Fortaleza, Belo Horizonte, Porto Algre, Salvador, Recife, Culaba, Manaus, Natal and Curtiba.
Three points will be awarded for each win, one point for each draw and no points for a loss. The FIFA World Cup 2014 champion will receive thirty five million US dollars and the runner up will take home twenty five million US dollars

FIFA (International Federation of Association Football) is responsible for organizing the major international football tournaments. It’s headquarter is in Zurich, Switzerland. The present FIFA president is Sepp Butler. The organization was founded in 1904 in Paris, consisting of football associations from France, Belgium, Denmark, The Netherlands, Spain, Sweden and Switzerland with Germany pledging to join.
The World Cup was first held in 1930, when the French FIFA president Jules Rimet wished to create a broader audience for the International Football Tournament. The first of the greatest show of all time was held in Uruguay, with only thirteen teams invited by the organization. Since then, the FIFA World Cup has gone through many reshaping to its present thirty two team final tournament. A two year qualifying process is a prerequisite, involving almost two hundred teams from across the globe.
Italy hosted the 1934 World Cup, and it was the first one to have a qualification stage. Uruguay and Argentina had not participated in the 1938 World Cup. The 1942 and 1946 tournaments were cancelled because of the Second World War
The 1950 World Cup was the first to include the British team. The 1954 World Cup was the first to be on television. The 1962 World Cup was hosted by Chile, but just before the tournament, a giant earthquake (9.5richter scale) shook the place and lots of repair had to be done. 1966 was the first time when an official mascot and a logo were introduced. There were no problems from the 1970 to the 2010 tournaments. The 2010 World Cup was the first to be held in Africa, with the proud host South Africa.

Fuleco is the official mascot of the 2014 Brazil World Cup. The name Fuleco is a portmanteau (a combination of two or more words into one word) Futebol(football) and Ecologia(ecology). It is a Brazilian three banded Armadillo which is an endangered species and has already become popular among people of all ages. Although Fuleco does not talk much, he is very social. Fuleco is also always online to stay close to family and friends.

Supplied by a Pakistani company, The Adidas Brazuca is the official ball of the 2014 football World Cup. The name Brazuca is also slang for Brazilian; it symbolizes emotion, pride and goodwill to all. Brazuca is a descendant of the Adidas Tango 12 series of balls. It has the same carcass and bladder but a different structure. It has a multi-color design to represent Brazil.

Official songs of this year:

The World Cup is a very rare opportunity to market shoes and sports gear all over the world. Spring and summer are always busy seasons, but this year’s business is already 30% up. Nike and Adidas produced a wide range of jersey, shoes and soccer balls. They are extremely competitive with each other, though Adidas has been in the sports business since 1979 while it has been just 20 years since Nike stepped in.
Nike has sponsored six of the ten most marketable footballers of the world. Adidas has just three of the stars, while Puma has one. Portugal’s Christiano Ronaldo and Argentina’s Lionel Messi are two of the important stars sponsored by Nike. Ronaldo can help sell a shirt even when he does not wear one.
Adidas is the official supplier of nine teams along with current champion Spain, along with Argentina and Germany. Adidas expects an income of $2.7 billion from football this year, which is bigger than Nike’s $2 billion. Nike believes it has already overtaken Adidas in boots including Germany (Adidas home country.)

Stars under the Spotlight:

Lionel Andres Messi was born on 24th June 1987. This Argentine star plays as a forward in FC Barcelona and also is the well deserved captain of the national team. He got four consecutive FIFA Player of the Year award from 2009 to 2012. Commonly known as the best player of the world, he has the most hat-tricks scored in the Champion’s League. He helped Argentina win the 2005 FIFA U-20 World Cup. He finished as both the best player and the top scorer with 6 goals. The legendary Diego Maradona himself declared Messi his successor.
Christiano Ronaldo de Santos Aveiro is a Portuguese forward who plays for the Spanish club Real Madrid. He is also the captain of the Portuguese national team and is paid 21 million pounds per year by his club (after taxes). He is the first top European league player to reach 40 goals in a single season. He also has plenty of awards in his bag. He made his debut for Portugal in August 2003. He scored his first international goal in the opening game of Euro 2004, against Greece.
Wayne Mark Rooney was born on 24th October 1985. He plays as a forward in Manchester United and the England national team. He made his international debut in February 2003 aged 17. He was part of 2006 and 2010 World Cups and is the best player of his country. He is the fifth highest paid player in the world with a yearly income of $32.6 million.

Xherdan Shaqiri is a 22 year old promising midfielder who will represent Switzerland during the FIFA 2014. Born in Yugoslavia from an Albanian origin, he won the 2012-2013 UFEA Champions League title inlate May.
Moussa Sissoko: This 24 year old comes from a Malian family and is a midfielder for France. He had started playing at a very young age and he joined club football when he was just 17 years old.
Marouane Fellaini is a Belgian midfielder who hails from a Moroccan family. He was born in November 1987. He started playing for Manchester United in 2013, in a deal worth 27.5 million pounds. The 194 centimeter tall young man has 50 international caps and 8 international goals.
Wakaso Mubarak is a representative of the Ghana national football team. He was born in July 1990. He played his first international match in October 2012. He was part of clubs like the Spanish Elche and La Liga. Currently he is part of the Russian club Rubin Kazan.
Vincent Aboubakar: The 22 year old Muslim footballer is expected to be one of the best Cameroonian players. He plays for the French club Lorient. He made his world cup debut in 2010.
Edin Dzeko: Born in 1986 in Bosnia’s Sarajevo, the Manchester City striker has begun his career as a midfielder in the youth team of Zeljezniar where he was one of the most talented boys in the blue team. In November 2009, he became Bosnia’s first UNICEF ambassador. He was the top scorer of Group G where his score of 10 goals qualified Bosnia for the first time in history to the FIFA World Cup.
Mesut Ozil is a German footballer who plays for club Arsenal and the national team. He was globally noticed during the 2010 FIFA world cup when he was nominated for the Golden Ball award, which is presented to the tournament’s best player.
Karim Benzema is a 27 year old forward playing for the French national team and Real Madrid. He was the top scorer in all European Leagues in 2007 with 11 goals. He comes from an Algerian family and he also did a very impressive performance in the UEFA Cup 2007.
Mamadou Sakho comes from a Senegalese family, and this 24 year old central defender is a representative of France. He is also a part of Premier League club Liverpool. He started his professional career in 2003, just at the age of 12.
Yaya and Kolo Toure are siblings playing as representatives of Ivory Coast. Yaya has gained several medals since his international debut in 2004. His achievements include two Spanish La Liga titles, two English Premier League titles, a Greek Super League title etc. Named as the best player of a game, Yaya politely refused a Champagne bottle award saying he does not drink because he is a Muslim.
Kolo Toure is one of the most experienced players in Africa. He plays as a defender for Liverpool FC. His first international match was between Niger and Costa Rica in 2000. He has played 107 international games for his country, recording 6 international goals.
Philippe Senderos is a 29 year old Swiss defender who converted to Islam in 2012. He made the declaration of faith at an Islamic center in Manchester. His first significant win was the European under 17 championship in 2002, and his first international match was in 2005 between France and Switzerland.
Gokhan Inler, the Swiss midfielder of Turkish origin, captained Switzerland in FIFA 2010. With 74 international caps and 6 international goals, he is the Swiss captain again in 2014.

What next?
The next World Cup (FIFA 2018) will be held in Russia. With 11 host cities and 12 football stadiums, the next World Cup will open to the world a country of 143 million people, 140 ethnic groups, and over 100 spoken languages.
Even if it takes 30 or 50 more years for our beloved Bangladesh to qualify for the World Cup, let’s just hope that someday the galleries will be over flowing with Bengali supporters and we will be able to see the Bangladeshi football team as a World Cup participant.