Photographs that rock the world 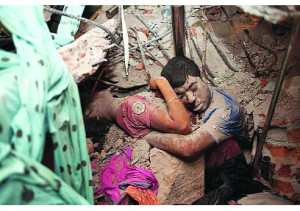 A single photography is capable enough to touch conscience of rational beings more than a thousand lines of poem, thousand lyrics of songs, thousand mouth words of revolution and thousand pieces of bullets used in tearing heart of human beings. However, some photographs always rock the heart of people of the world for its everlasting appeal.

Pic: 1
This is an open question to you how much pathetic photograph you have ever seen against humanity? Perhaps the photograph above will be the best one.
The vulture is waiting for the child to die so that it can eat him. This picture shocked the whole world. No one knows what happened to the child, including the photographer Kevin Carter who left the place as soon as the photograph was taken. Three months later he committed suicide due to depression.
The photograph is the “Pulitzer Prize” winning photograph and it was taken in 1994 during the Sudan Famine. The picture depicts stricken child crawling towards a United Nations food camp, located a kilometer away.

Pic: 2
Can you say how much blood it needs to establish peace in earth? How much tears it needs to shed to capture the world? Nobody knows the answer. However, the above photograph depicts a portion of tears for war.
Award winning photo showing an Iraqi man comforts his son at a holding center for prisoners of war in An Najaf, Iraq, 31 March 2003. AP photographer Jean-Marc Bouju has won the 2003 World Press Photo of the Year competition.

Pic : 3
This single photograph paved the way for whole states of USA to mandate tougher fire safety codes. On July 22, 1975, photograph Stanley J. Forman working for the Boston Herald American newspaper when a police scanner picked up an emergency: “Fire on Marlborough Street!”
Climbed on the fire truck, Forman shot the picture of a young woman, Diana Bryant, and a very young girl, Tiare Jones when they fell helplessly. Diana Bryant was pronounced dead at the scene. The young girl lived. Photo coverage from the tragic event garnered Stanley Forman a Pulitzer Prize.

Pic : 4
The picture above documented the most notorious language of opposition. In June 11, 1963, Thich Quang Duc, a Buddhist monk from Vietnam, burned himself to death at a busy intersection in downtown Saigon to bring attention to the repressive policies of the Catholic Diem regime that controlled the South Vietnamese government at the time. Buddhist monks asked the regime to lift its ban on flying the traditional Buddhist flag, to grant Buddhism the same rights as Catholicism, to stop detaining Buddhists and to give Buddhist monks and nuns the right to practice and spread their religion.

Pic : 5
One photograph is capable enough to make understand people without any description that the Germany is no more in Second World War. Soviet Union soldiers Raqymzhan Qoshqarbaev and Georgij Bulatov raising the flag on the roof of Reichstag building in Berlin, Germany in May, 1945. This is one of the world’s most famous photographs with historical evidence.

Pic: 6
Raising the Flag on Iwo Jima is a historic photograph taken on February 23, 1945, by Joe Rosenthal. It depicts five United States Marines and a U.S. Navy corpsman raising the flag of the United States atop Mount Suribachi during the Battle of Iwo Jima in World War II.
The photograph was extremely popular, being reprinted in thousands of publications. Later, it became the only photograph to win the Pulitzer Prize for Photography in the same year as its publication, and ultimately came to be regarded as one of the most significant and recognizable images of the war, and possibly the most reproduced photograph of all times.

Pic :7
The word mother is always incomparable. She always remains worried for her child. The photograph above shows its everlasting expression. In this photograph, the name of the lady is Thompson who is the representative of all mothers in the world. Lange captured the image while visiting a dusty California pea-pickers’ camp in February 1936, and in doing so, captured the resilience of a proud nation facing desperate times.
Unbelievably, Thompson’s story is as compelling as her portrait. Just 32 years old when Lange approached her. Thompson was a mother of seven who’d lost her husband to tuberculosis. Stranded at a migratory labor farm in Nipomo, Calif. her family sustained themselves on birds killed by her kids and vegetables taken from a nearby field – as meager a living as any earned by the other 2,500 workers there. The photo’s impact was staggering. Reproduced in newspapers everywhere, Thompson’s haunted face triggered an immediate public outcry, quickly prompting politicos from the federal Resettlement Administration to send food and supplies. Sadly, however, Thompson and her family had already moved on, receiving nary a wedge of government cheese for their high-profile misery. In fact, no one knew the identity of the photographed woman until Thompson revealed herself years later in a 1976 newspaper article.
Pic : 8
“Still photographs are the most powerful weapon in the world,” AP photojournalist Eddie Adams once wrote. A fitting quote for Adams, because his 1968 photograph of an officer shooting a handcuffed prisoner in the head at point-blank range not only earned him a Pulitzer Prize in 1969, but also went a long way toward souring Americans’ attitudes about the Vietnam War.
For all the image’s political impact, though, the situation wasn’t as black-and-white as it’s rendered. What Adams’ photograph doesn’t reveal is that the man being shot was the captain of a Vietcong “revenge squad” that had executed dozens of unarmed civilians earlier the same day. Regardless, it instantly became an icon of the war’s savagery and made the official pulling the trigger – General Nguyen Ngoc Loan – its iconic villain.
Sadly, the photograph’s legacy would haunt Loan for the rest of his life. Following the war, he was reviled where ever he went. After an Australian VA hospital refused to treat him, he was transferred to the United States, where he was met with a massive (though unsuccessful) campaign to deport him. He eventually settled in Virginia and opened a restaurant but was forced to close it down as soon as his past caught up with him. Vandals scrawled “we know who you are” on his walls, and business dried up.
Adams felt so bad for Loan that he apologized for having taken the photo at all, admitting, “The general killed the Vietcong; I killed the general with my camera.”

Pic : 9
Philippe Halsman is quite possibly the only photographer to have made a career out of taking portraits of people jumping. But he claimed the act of leaping revealed his subjects’ true selves, and looking at his most famous jump, “Dalí Atomicus,” it’s pretty hard to disagree.
The photograph is Halsman’s homage both to the new atomic age (prompted by physicist’ then-recent announcement that all matter hangs in a constant state of suspension) and to Dalí’s surrealist masterpiece “Leda Atomica” (seen on the right, behind the cats, and unfinished at the time). It took six hours, 28 jumps, and a roomful of assistants throwing angry cats and buckets of water into the air to get the perfect exposure.
But before settling on the “Atomicus” we know today, Halsman rejected a number of other concepts for the shot. One was the idea of throwing milk instead of water, but that was abandoned for fear that viewers, fresh from the privations of World War II, would condemn it as a waste of milk. Another involved exploding a cat in order to capture it “in suspension,” though that arguably would have been a waste of cats.
Halsman’s methods were as unique as they were effective. His celebrity “jump” portraits appeared on at least seven Life magazine covers and helped usher in a new – and radically more adventurous – era of portrait photography.

Pic : 10
What will happen to an apple if a speedy bullet passes through it? Harold Edgerton’s famous high speed picture of a bullet going through an apple depicts it to the world for the first time. Taken in 1964, it became a very famous image, not least because it was such an unusual photo based on a great achievement in high speed photography. Edgerton, professor at MIT, is also inventor of the strobe flash and a pioneer of stop-action photography. He collaborated with Jacques-Yves Cousteau to experiment photographing some of the deepest seabeds in the world.

And, the last one is from Bangladesh

This was taken by Taslima Akhter, after the Rana Plaza collapse at Savar last year. The photo depicts the Victims lie in the rubble, on the day after the Rana Plaza building, which accommodated five garment factories, collapsed. The relationship between the two people is not known.
In the days following the disaster, more than 800 bodies were visually identified by relatives, or by using ID cards or personal possessions. Relatives of others had to give DNA samples, but months after the incident many had still not been able to identify missing family members. The collapse of the Rana Plaza ranks as one of the worst industrial accidents in history.
Some of the above photographs shed tears from eyes, some shed blood from heart, some thrill and some provoke documents of history. For this reason they take room in heart of people all over the world with an evergreen portrait.