Electronics may confuse a bird’s ‘compass’ 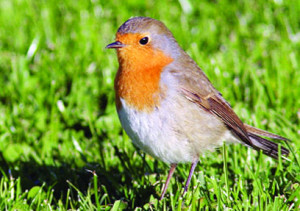 Robins get disoriented when surrounded by the electromagnetic noise given off by some ordinary electronic devices
The magnetic sense of European robins, like the one shown here, may get confused by the electromagnetic radiation given off by electronic devices.
Birds know where to go when it’s time to migrate. They get some of that superb sense of direction from their ability to detect Earth’s magnetic field. That magnetic sense acts a bit like a compass used by human hikers. But the energy coming from some electronic devices can perturb a birds’ internal compass. And that might confuse a bird’s sense of direction, according to a new study.
Most electronic devices send out waves of energy called electromagnetic radiation. The levels are too low to harm people. Any given device only sends out a small amount. But some types of this radiation could pose a problem to birds.
Even when held captive in a lab, birds know when it’s time to migrate. They fidget in their cages. They try to face in the direction they would fly away, if outdoors. But the birds can’t always line up correctly, notes Henrik Mouritsen. He’s a biologist at the University of Oldenburg in Germany.
He and his colleagues studied European robins (Erithacus rubecula). They took some birds outside the city of Oldenburg to a rural area with low electromagnetic noise. There, the birds had no problem figuring out which way to turn. But birds caged in the city were confused. They were likely to face in the correct direction only when they were shielded from electromagnetic radiation.
Mouritsen and his colleagues reported their findings May 7 in Nature.
Electronic equipment can sometimes interfere with a magnetic compass. Scientists have long argued about whether such devices might also interfere with the biology of animals. That includes a bird’s magnetic sense. Earlier studies have claimed to find such effects, but many scientists didn’t accept those findings.
Joseph Kirschvink has called for researchers to be more careful when studying the effects of electronic devices on birds’ sense of direction. As a biomagnetist at the California Institute of Technology, in Pasadena, he studies animals’ magnetic sense. He says Mouritsen’s team has done better work than any previous team in probing how electronic noise might affect birds’ magnetic compass.
As a result of this study, he told Science News, “I think it needs to be considered seriously.” He also said he hopes to see other scientists try to confirm the new findings by running similar tests.
Mouritsen’s experiments began back in 2004. He observed that caged robins did not face toward their migratory directions. For several years he could not figure out why. Then another researcher in his lab suggested that they set up a shield. Called a Faraday cage, it consisted of grounded aluminum screens that blocked incoming electromagnetic radiation. When protected by the screening, birds in the lab at last faced in the direction they should migrate.
Over the next few years, Mouritsen and his colleagues kept testing the idea that electromagnetic noise upsets a robin’s sense of direction. They tried various ways to challenge it. Yet their data always showed the same thing. The birds only faced the correct direction when the shield blocked out the electromagnetic radiation.
Not all types of everyday radiation confused the birds’ sense of direction. Cell phones and power lines are often blamed for confusing birds. But the researchers reported that they had no effect in their tests.
Mouritsen told Science News he was reluctant to start studying birds and electromagnetic radiation. After all, he knew that previous experiments that tested its effects on animals had been criticized as zany or sloppy. But he says he and his students worked hard to think of different ways to test their ideas.
“It’s not the first time it’s been claimed,” he said of the link between compass confusion and electronics. “But I hope it’s the first time it holds up.”