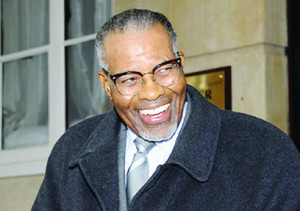 Dr. Ahmad Mohamed Ali Al-Madani is the first and present president of Islamic Development Bank (IDB) situated in Jeddah, which was established in 1975 and is now operating its development project and activities among 56 Muslim countries. Dr.Ahmad devoted his life to serve the ummah through IDB and various ways. Let’s know something about him.
Dr. Ahmad was born in 1934 in Al-Madinah Al-Munawarah, in Kingdom of Saudi Arabia.
This Arabian scholar successfully turned to higher education after finishing his primary and secondary education from different institution in Madina and obtained a B.A. Degree in Commerce from the Faculty of Commerce of Cairo University in 1957. Besides, in 1959, he received another B.A. Degree in Law from the Faculty of Law from the same University. In his incandescent career, he waxed his life by achieving a M.A. Degree in Public Administration from University of Michigan, USA in 1962 and finally, to stay at zenith of knowledge, in 1967, he accomplished a Ph.D in Public Administration (Fiscal Management) from State University of New York, USA. The Theme of his Dissertation was “Financial Control before Disbursement – Comparative Study of the Financial System in Saudi Arabia and the State of New York”.
Like his glowing education life, he started his professional life as a Director of ‘Scientific and Islamic Institute’ situated at Aden in Yemen in 1958 and spend two years there.
Afterward, he returned to his homeland Saudi Arabia and joined as the Acting Rector of King Abdulaziz University where he stayed till 1972.for his philanthropic and cerebral motive, the Saudi government appointed him as Deputy Minister of Education for Technical Matters in 1972and thus he served the nation for three years (1972-1975). In the meantime, in 1975, he was elected as the president of the Islamic Development Bank (IDB) which was established upon the inventiveness of ‘the late King Faisal Bin Abdulaziz’ and ‘Organization of the Islamic Countries (OIC)’ and worked till 1993.Furthermore, during 1993–1995; he was the Secretary-General, Muslim World League, Makkah Al-Mukarramah and reshuffled the MWL as it was his key responsibility. Currently, again since 1995, he has been serving the humanity as the President of Islamic Development Bank group, (IDB Group), Kingdom of Saudi Arabia.
With his first-rated knowledge and practical experience, took various attempts to widen the banking activities in numerous sectors such as research, economics, finance, trade, insurance and private sector and successively founded different institutions incorporating Islamic Research and Training Institute (IRTI), the Islamic Corporation for the Insurance of Investment and Export Credit (ICIEC), the Islamic Corporation for the Development of the Private Sector (ICD), and the International Islamic Trade Finance Corporation (ITFC) which comprises the Islamic Development Bank Group.
Dr.Ahmad concentrated his knowledge and deeds to attain and ensure the highest possible wellbeing of people through Islamic principles as directed in the Holy Quran and the Sunnah with the super combination of modern comprehension as he firmly believe that the principles of Islamic economics and banking is ample to solve the current economic problem of the world.
This famed intellectual established the Islamic Solidarity Fund for Development (ISFD) to eradicate poverty, illiteracy, etc by taking the challenging mission of “Khairu Annaas Min Nafa Annas – The best amongst you are those who are beneficial for others”.
Dr.Ahmad’s cordial services in different institutions both in government as well as private level recognized him as a social maker in Saudi Arabia and rest of the world.
He is member of the Higher Education Councils of five Universities including King Fahd University of Petroleum and Minerals, Imam Mohammed Ben Saud University, King Saud University Council, and the Board member of the Saudi Fund for Development.
Dr.Ali told that, mutiple donors and development agencies/partners must ‘synchronize’ their policies and programs both at the planning and execution stages to attain their goals which may satisfy the common characteristics of development. As he states that, “Development is a … complex and multifaceted issue that may not necessarily be captured by a handful of indicators”. He also said that, “the continued sustainability of a project many years after the project has been completed” is also another criterion in determining the success of a development project.
Dr Ali has vast knowledge on Islamic Economics, Banking and Education and wrote many articles, papers and delivered speeches, lectures on these topics which expressed his ideas of development and welfare of people. His famous ‘Lecture Series’ was published with the title “Role of Islamic Banks in Development” for which he was awarded an “IDB Prize”.
He is married and has four children. Currently, he is living with his family in Saudi Arabia. Finally, it can be cited that, we should take the lesson from his life and pray to Allah for him so that he can contribute more to the ummah.