A Faith I Had Never Considered 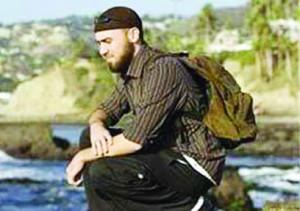 I have not always been a Muslim.
There have been times in my life that I have been the very opposite of what that means to be; yet, in some way, I feel like my whole life has led me to it.
I had been raised to hold a Christian faith in a home of mixed denominations. Before my mother, a devout Roman-Catholic, would accept my father’s proposal for marriage, she made him promise before a priest that they would raise their children Catholic. Though my father comes from a very devoted Mormon family, he accepted.
The result for us — their children — was still a mix between the two. My uncle once joked that this is why I became a Muslim, because I couldn’t decide between my parents’ opposing faiths. My uncle did not know the long search I ventured upon before I was finally guided to Islam.
My mother had always been very vocal about her faith. There was not a day that would go by when we did not hear her cheerfully singing aloud her daily prayers, or reminding us to be conscious of God.
My father was more reserved in speaking about his faith, though deeply committed to following its moral obligations.
If I or any of my siblings ever were in any kind of trouble, we would find an understanding.
I did not realize how much of an effect their practice had upon me until I graduated from high school. It was during those last few years at Folsom High School that God chose to put my family through its greatest trial.

My Mother’s Illness
My mother, who had previously battled severe tumors while I was in grade school, had been diagnosed with a rare form of stomach cancer. The doctors could not promise her much help or time. With firmness, she attended her chemotherapy sessions, even though her hair would fall out as a result, while also seeking other treatments.
She was determined to see her children grow up. The family gathered around her in an amazing support. All of her children were there to care for her, especially my younger sister.
One evening when I felt that I would have an opportunity to speak with her alone, I went downstairs and stood by her bedside. She had lost an incredible amount of weight and had an oxygen tank to help her breathe, but when she saw me she smiled so big, it was as if none of that mattered.
I stood there for what seemed like several minutes, though it was probably only a few seconds, taking in what I saw. Her eyes glowed with love and optimism, and she had a smile to match. In her greatest trial in life, she seemed to bare it with such strength — strength that I did not even seem to have.
I told her then that I loved her, and her smile grew even wider. Sensing why I had elected that time to say so, she leaned forward as much as she could and said that I had nothing to worry about, that everything was going to be okay. I felt in her a warm trust in whatever God had planned for her, and her words left an impression upon my heart.
Only a few weeks later, my sister knocked on my bedroom door to let me know that our mother had passed away.
She had been a devoted friend, a loving sister, and an active member of the community, as well as a mother. Her funeral was attended by hundreds of family members and friends. Each of which had nothing but the best things to say about her.
It was one statement though that changed my life forever. While giving the eulogy, the priest asked each one of us to think of one characteristic my mother had which we treasured, and to place that character trait into ourselves. “That,” he said, “would be her legacy.”
I knew right then that I treasured most her inner strength, which allowed her to be so optimistic and loving even through her greatest trial. I knew as well that this strength came from her firm faith in God. I became determined to find that same strength, but it would only come with a search for a faith I could find certainty in.
I can’t remember a time in my life that I did not believe in God, though there were times that I wrongfully criticized Him. My mother had raised me to be a Catholic, but I never understood the necessity of calling upon saints when we are also taught that God is All-Powerful, and I had difficulty accepting a human being to be my Creator.
There was faith in my heart for God, but I did not know how to understand Him. Inspired by a famous historical figure who at 18 planned to be on the road to stardom by 23, I made a promise to myself to be on the correct religious path — whatever that might be — by the same age.
I soon picked up a new copy of the Bible and started reading it. I shared some of my questions about God with friends, but they never seemed to take religion seriously. With an open heart I tried to find in the Bible a clear direction in life.
Being unsure of any correct denomination to follow, I tried to let the Bible speak for itself. Within the verses I found ethical guidelines, history, and genealogical information. I believed in the prophets of God, but — though I loved his words — believing Jesus (peace be upon him) as God was still the most difficult concept for me to accept.

Searching for the True Faith
I wanted so much to believe, but I could not force it upon myself. While feeling utterly lost one night, I begged God to give me the faith to believe that Jesus was God. For a moment I thought that I felt it, but it was soon lost. I then began my search for faith in other religions.
Into the works of Hinduism, Hare Krishna, New Age, and Buddhism I dove. They offered beautiful sayings and stories describing the struggles of moral people, but I could not find within their works anything to provide me with any certainty.
Meditation and the focus on self-control in Buddhism did offer a clearer sense of practice than other faiths I had studied, but the God Whose presence I was seeking was not to be found in their scripture.
I was not just seeking a theology to accept, I was yearning for the feeling of conviction that comes only with true faith.
After considering what I thought to be all of the major religions, I decided that whatever God wanted me to practice must have been corrupted by human hands, or misunderstood by its adherents. I was certain the truth could only be found by separating all of these human additions to scripture through an in-depth, and sincere, study of them all. Feeling still uncertain of what I should believe, I placed my hope in God that He would help me find Him.
I was fortunate enough to have a friend who invited me to live with him in Santa Barbara, California. Both he and I treasured the idea of being away from old friends who only seemed to criticize our efforts to find God and our true selves.
I wanted to know the truth so I could act upon it, and not just make conversation about what the truth might be. Though I went through a lot of personal growth, I still did not find the faith I was seeking in Santa Barbara.
I moved back home to Sacramento and, with my 23rd birthday a few months away, I began to feel lost and utterly depressed. The most important promise I have ever made did not seem likely to be fulfilled.

My Heart Opened for Islam
Disappointed, I then stopped reading any spiritual works, and took to learning about current events.
I was very interested in knowing more about conflicts in the Middle East, especially the Holy Land. I went to my local bookstore and bought a book about the conflict in Israel and Palestine that kept referring to a religion that taught people violence and hatred. The author made clear that this religion was the problem in the Middle East and, not knowing any more about this religion than what he told me, I took the author at his word.
In conversations, I would reference the work, and speak out against this religion of intolerance, this “Islam”.  I did this until a sincere friend asked me if I realized I was being prejudiced. He was right, I actually only knew about Islam through the text I had read.
I decided I would ask my store manager, Danyelle, who was a convert to Islam. She very gladly gave me a copy of the Quran, and her husband, Jabari, suggested that I visit them at their house for further discussion.
For a month and a half, I visited them every Friday night and spoke with them about religion. They were very generous, serving me dinner every time I came, and answered my questions without pushing me to believe.
I had read part of the Quran before, but now, having someone to answer my questions, my heart opened, and I really tried to understand its meaning.
The Quran stood out from any other scripture that I had ever read. It was far from being intolerant, rather it was uniquely balanced. Its simultaneous emphasis upon both societal laws and mercy made sense, and its passages revealed a deep knowledge of human character. Concepts I found true in other scripture were also present in the Quran, and if they differed, I found the Quran to actually make more sense.
After six weeks of discussions and reading, I was convinced that the Quran was divinely inspired.
On Friday, February 25, I made the announcement that I was going to convert and that Sunday I said with full conviction that, ” I bear witness that there is none worthy of worship except God, and I bear witness that Muhammad is the Messenger of God”. In Arabic this is called the “Shahadah”.
As the sun rose the following day, and I was contemplating upon my new faith, I realized that it was my 23rd birthday, and it was God who had helped me fulfill my promise. After all of my searching, God revealed to me a faith that I had never considered, and it is the greatest gift that I treasure.
Every time I read the Quran, or learn something new about it, I only grow in my faith. This is the type of conviction that I was seeking, and it is what gives me the strength to be the person I am today.