The nose knows a trillion scents 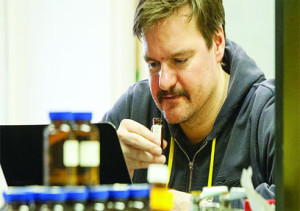 The human nose can detect more than a trillion different odors. Getting that number took a lot of smelly work. Fortunately, scientists found dozens of volunteers willing to help out.
There had been a long-standing claim that people could detect 10,000 different scents. That estimate was way small. The new research suggests the real number is 10,000 times bigger. Scientists had thought the old number might need revising. The new study certainly supports that.
“We’re visual animals, but this new report highlights humans’ superb sense of smell,” Noam Sobel told Science News. This neuroscientist at the Weizmann Institute of Science in Rehovot, Israel, did not work on the new study.
One trillion (1,000,000,000,000) is a huge number. Imagine every person on Earth gave off 140 distinct odors all his (or her) own. A single nose might be able to tell them all apart, based on the new numbers.
Our sense of smell may be even more refined than sight or sound. People can see several million different colors and hear roughly 340,000 tones, Leslie Vosshall told Science News. Vosshall is a geneticist at Rockefeller University in New York City. She led the new study published March 21 in Science.
Vosshall and her coworkers recruited 26 men and women to visit a lab and sniff. Then to sniff, and sniff, and sniff some more. Each person completed 264 different smell tests. Each time, the volunteers sniffed a trio of vials. Two contained the same odor. A third differed. The participants had to identify which one wasn’t like the others.
Most odors in the real world contain a mix of molecules, each of which contributes some part of the final scent. Here, the scientists combined a selection of molecules to create the different scents. They chose various amounts from a group of 128 different chemicals to concoct the odors.
People could generally tell the difference between two scents that had been concocted from two completely different groups of molecules. Most people could even tell the difference between scents that shared half of the same molecules. But as the scents’ number of shared ingredients increased, people found it harder to tell scents apart.
No one in the study could tell the difference between two smells that shared 90 percent of the same molecules.
Based on those results, the scientists estimate that the average person can identify about a trillion different smells, each made from 30 separate odor molecules. However, the most sensitive smeller in the group could probably identify many more, the scientists say. Someone with a relatively insensitive nose would probably detect only about 80 million, they now suspect.
The study only used 128 odor molecules, far fewer than the number that exist in the real world. As such, one trillion is likely a low estimate for a sensitive nose, Andreas Keller told Science News. A coauthor of the new study, he also is a geneticist at Rockefeller.
Sobel told Science News that many animals also may be able to detect a trillion or more odors. However, scent-counting studies like this one haven’t been conducted on smell-sensitive critters.