The Hardships of Childhood 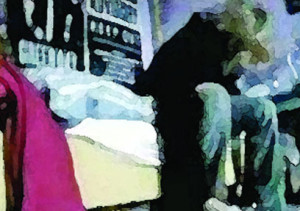 Scenario:1
Ten-year-old Sufia was the eldest among four siblings. She was enjoying her days with friends. Studies always attracted her.  She held the first position of Grade 3. Parents always had high dreams about her future.  All of a sudden, her father had a serious accident that left him paralyzed for the rest of his life. As a result, Sufia traveled with a distant relative to Dhaka city.
The little girl got employed as a domestic helper in one of the middle class families of the capital city. At first, she was told to look after a toddler of her employer.  Just a few months later, her employer began giving her much heavier works. She was usually fed on a very small amount of food. Sufia sometimes had to depend on stale food to satisfy her hunger. Old clothes were all she had. She was forbidden to touch any toy or go in front of the T.V.
One day, while taking a pail of hot water to the bathroom, she accidentally spilled the water on her feet. She will never be able to walk normally now.

“Hey Picchi, deliver my orders now!”
“Hey Picchi, my kameez’s stitch came off, fix it!”
He was having a hard time coping up with the demanding customers. Still, he moved at a cheetah’s pace. Sometimes delivering, and sometimes repairing clothes. Droplets of sweat formed on his forehead, but he had no time to wipe them off.
He was a thirteen-year-old called Ibrahim. Unfortunately, none addressed him by his real name at his workplace. There were quite a number of ten to fifteen year olds working at various tailoring shops of Gawsia Market as tailor assistants. All of them had a common name: Picchi (The little one).
Ibrahim lived in a nearby slum with his mother and eight-year-old younger brother. His father left their family and got married again when he was just five years of age.
Ibrahim got about 2500 taka as his monthly salary along with 20 taka per day refreshment allowance. He normally did not like to use the 20 taka; he would rather save it for clothes or other necessities. When his mother would not get the time to cook food, (as she was a part time domestic helper of various families) Ibrahim would use the 20 taka to stop his hungry stomach from growling.
If he was asked what he would like to be when he grew up, he would just look at the shop he works at and say: “I would like to own a shop like this one when I grow up.”
One look at these innocent faces is enough to bring tears to one’s eyes. These children also require and deserve a proper and happy childhood. Unfortunately, they are becoming victims of circumstances.
In 2011, child labor was common in Bangladesh with 10 percent of children between 5 and 15 years of age in the workforce. There were also some children who went to school besides working. They were between 7 to 14 years of age (6.8 percent).
Bangladesh passed the Human Trafficking and Suspension Act which makes Human Trafficking a capital offence. Bangladesh has a very low minimum education age. Children in Bangladesh are engaged in the worst forms of child labor including dangerous activities in agriculture and domestic services.
There are many causes behind child labor:

Poverty: If the total family income is not enough to fulfill the basic requirements of life, children begin working to give financial support to their family.
Illiteracy and lack of knowledge about education: Uneducated parents hardly ever understand the importance of education and become reluctant to send their children to schools.
Family Breakups: If by any chance, the father leaves the mother, or one parent amongst the two meets with death, children have no other choice but to start working to earn money.
Last but not the least, it can be said that if we, the people of all races, work together to help these children get a proper childhood and improve their standards of living, their smiling faces would be a great reward indeed!