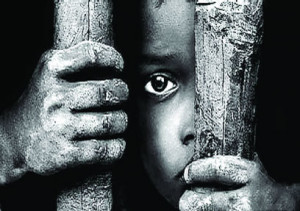 Slavery is a way of treating people as personal possessions. It also includes trading people and forcing them to work for either a small amount of payment or none at all.
The slavery practices of pre-historic Arabia first developed the Islamic views on slavery. The Arab slave trade was the practice of slavery in the Arab world, mainly in North Western Asia, North Africa, Southeast Africa and certain parts of Europe such as Iberia and Sicily.
Modern Slavery is a multi- billion dollar industry with estimates of up to 35 billion US dollars generated per year. Almost 30 million people are forced to live as slaves across the globe today. India has the most slaves of any country at 14 million. China 2.9 million, Pakistan 2.1 million, Nigeria 701000, Ethiopia 651000, Russia with 516000, Thailand 473000, Congo 462000, Myanmar 384000 and Bangladesh 343000. Even Moldova and Benin has many people working unwillingly as slaves.
Mauritania (Islamic Republic of Mauritania) is a country in the Maghreb region of western North Africa. This was the last nation to officially stop slavery. However, 4.3 percent of the nation still remains as slaves.
Africa is one of the most problematic areas in terms of contemporary slavery. People are sold like objects, forced to work extremely hard for a meager amount of income and are at the mercy of their employers.

Types of contemporary slavery:
Sex Trade:Young women unknowingly enter into slavery by answering a call for a job as a home or child care worker and are imprisoned, forced to work against their will and without pay.
Though slavery has been banned all over the world, there are quite a number of female sex slaves in areas without an effective government control such as Sudan, South Africa etc.
The Chukri system is debt bondage or debt slavery where a girl is forced to be a prostitute in order to pay off debts. This system is found in Kidderpore and other parts of West Bengal.
Child labor: The employment of children which takes away the fun of their childhood. It prevents them from going to school and that is mentally, physically, socially and morally harmful for them. In some countries, children as young as five years of age also work to support their families financially. In Bangladesh, children mainly work as domestic helpers where they are compelled to do many dangerous works too tough for their age. We also see children working as helpers of construction workers. Moreover, many public transports have child helpers.
On the other hand, children sometimes have to work in dangerous places like brick kilns or tanneries. These works are capable of making them permanently injured for life. Do we really want a large number of handicapped kids across the country? Of course not!
Forced Marriage: Forced marriage is also a type of modern slavery where the bride, the groom or both the parties give consent (most of the times, the girls are forced to agree, especially if she is from a poor family) to marry someone double their age. The concept of bride buying and wife selling is also quite common in some countries.
Long ago, when the Arab traders used to come to a foreign country for business purposes they would marry poor girls.  A large amount of dowry was given, and then the girl would be considered as the man’s property. When his business concerns were over, he would simply divorce her and go back to his own country.
Human trafficking: It is the trade in humans for a number of reasons including forced labor and surrogacy. A stranger female body gets an embryo created by anIVF in a manner so that the resulting child is genetically unrelated to the surrogate.
Peonage: A peon is someone paid a very little amount of money and is on constant supervision by his superiors. In South Asian English, a peon is an office boy or attendant kept for odd jobs.
Penal labor: Various types of labor which prisoners are required to perform. These are typically manual labor.
No matter what the reason may be, slavery is not expected in this modern world. Every single person has the right to live happy and free, and to work at will.