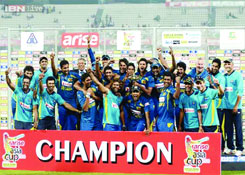 Asia Cup: Sri Lanka wins for the fifth time
Sri Lanka on Saturday, 8th March regained the Asia Cup trophy with a comfortable five-wicket victory over defending champions Pakistan, riding on Lasith Malinga’s five-wicket haul and opener Lahiru Thirimanne’s fluent century. They clinical as they restricted Pakistan to a modest 260 for five and then surpassed the target with 22 balls to spare to lift their fifth Asia Cup title. The last time they won the regional championship was in 2008. Sri Lanka have won nine ODIs in succession between December 27, 2013 and March 8, 2014. They remain the only Test team to have won all ODIs (eight in succession) in 2014.
The top run-getters in the Asia Cup 2013-14 are Thirimanne?? (279), Umar Akmal (253) and Kumar Sangakkara (248).?? Thirimanne has got his first player of the series award in ODIs.

Man of the Tournaments
2000 : Mohammad Yousuf- 295 runs
2004 : Sanath Jayasuriya – 293 runs and 4 wickets
2008 : Ajantha Mendis    17 wickets
2010 : Shahid Afridi    265 runs and 3 wickets
2012 : Shakib Al Hasan    237 runs and 6 wickets
2014 : Lahiru Thirimanne    279 runs
EL Clasico: Bercelon beats Real with Messi Hatrick
El Clásico is the name given in football to any match between Real Madrid and FC Barcelona. Other than the UEFA Champions League Final, it is the most followed club football match in the world, watched by hundreds of millions of people. In the last match last month  Real Madrid was beaten by Barcelona by 4-3 goal score.  Lionel Messi scored a hat trick to give Barcelona a 4-3 win at 10-man Real Madrid in an electrifying and contentious “clasico” match that kept the three-way Spanish league title race wide open.
The rivalry comes about as Madrid and Barcelona are the two largest cities in Spain, and the two clubs are among the richest and most successful football clubs in the world. Real Madrid leads the head to head results in competitive matches with 90 wins to Barcelona’s 89. Barcelona leads the count in official titles won with 81 trophies (the three Inter-Cities Fairs Cup’s won by Barcelona are included since the tournament is the predecessor of the UEFA Cup and recognized by FIFA), while Real Madrid has won 76 trophies. Along with Athletic Bilbao, they are the only clubs in La Liga to have never been relegated. They are sometimes identified with opposing political positions, with Real Madrid viewed as representing Spanish nationalism and Barcelona viewed as representing Catalanism. Some of the records of El Clasico:

ESPN cricinfo Awards: Tendulkar voted cricketer of the generation
ESPN cricinfo Awards recognizes the best individual batting and bowling performances in cricket over the calendar year. They are voted on by an independent jury of former cricketers, commentators, and ESPNcricinfo’s senior writers. Previous winners have included Dale Steyn, Virender Sehwag, Shahid Afridi and Kumar Sangakkara.
Sachin Tendulkar has been voted the cricketer of the generation by a 50-member jury of current and former cricketers and journalists. Tendulkar beat strong competition from Shane Warne and Jacques Kallis to win the award, presented to mark the first generation of the existence of ESPNcricinfo, which has been online since 1993.
The jury that decided on the award included Michael Holding, Ian Chappell, Martin Crowe, Mark Taylor, Younis Khan, Kumar Sangakkara, Mahela Jayawardene, Barry Richards, John Wright and Jeff Dujon, among others.

Other Winners:
Mitchell Johnson’s series-defining 7 for 40 in the Ashes Test in Adelaide won the Test bowling title for 2013 in the annual ESPNcricinfo Awards, over performances from Dale Steyn, Vernon Philander, James Anderson.
Shahid Afridi won the ODI bowling award with his 7 for 12 against West Indies – a match he also dominated with the bat, making 76 off 55 balls. It was Afridi’s second ESPNcricinfo Award; he won in the same category for 2009.
Indian players took the two batting prizes. Shikhar Dhawan won the Test batting award for his rollicking 187 on debut against Australia in Mohali last year. Rohit Sharma’s ODI double-century in Bangalore, also against Australia, was picked as the ODI batting performance of the year.
A new category, the Debutant of the Year, voted on by ESPNcricinfo users, was won by India’s Mohammed Shami, who took 17 wickets in his four Tests in 2013, and 30 ODI wickets.
ESPNcricinfo also introduced an award to acknowledge the efforts of cricketers that helped people outside the sport. Rahul Dravid won the Cricket for Good award for his mentorship of junior and paralympic athletes in India in his association with the GoSports Foundation.
South Africans AB de Villiers and Dale Steyn dominated the Statsguru Awards, which are adjudged based purely on statistical data. De Villiers won Batsman of the Year, Best Test Batsman, and Most Consistent Batsman. Steyn was the Bowler of the Year and the Best Test Bowler.

IPL 7 begins
in April:
The 2014 season of the Indian Premier League, abbreviated as IPL 7 or Pepsi IPL 2014, will be the seventh season of the IPL. The Mumbai Indians will be the defending champions, having won the 2013 season after defeating Chennai Super Kings in the final. There will be eight teams this season, one fewer than 2013 after the withdrawal of the Pune Warriors India.
A part of this season will be held outside India after Home Minister Sushil Kumar Shinde denied the provision of security the league demanded as it would clash with the 2014 general election. The tournament will be jointly hosted by India, the United Arab Emirates, and Bangladesh. The opening matches will be held in the UAE at three different stadiums in Abu Dhabi, Dubai and Sharjah with some matches likely to be held in Bangladesh. The players auction took place on 12 February and 13 February 2014. Unlike previous seasons, the auction was in Indian Rupees rather than United States dollars.
The schedule of the first phase of the IPL 2014 was announced on 19 March 2014. The first phase of the tournament consist of 20 matches played from 16 April to 30 April 2014 in the United Arab Emirates. The opening match of the tournament will be played between the defending champions Mumbai Indians and the Kolkata Knight Riders on 16 April 2014 at the Sheikh Zayed Cricket Stadium in Abu Dhabi at 6:30 pm local time (8:00 pm IST). The schedule of the remaining matches will soon be announced.
Previous IPL Winners:
1st IPL (2008) – Rajasthan Royals (RR vs CSK)
2nd IPL (2009) – Deccan Chargers (DC vs RC)
3rd IPL (2010) – Chennai Super Kings (CSK vs MI)
4th IPL (2011) – Chennai Super Kings (CSK vs RCB)
5th IPL (2012) – Kolkata Knight Riders (CSK vs KKR)
6th IPL (2013) – Mumbai Indians (CSK vs MI)

Bangladesh unbeaten qualifier for Asian Games Hockey Cup:
Bangladesh clinched the title of eight-team Islami Bank Asian Games Hockey Qualifiers with all-win run shocking formidable Oman by 6-1 goals in the final at the Maulana Bhasani National Hockey Stadium on Sunday on 23rd March in Dhaka. Puskar Khasia Mimo scored two goals for Bangladesh. The two goals scored by Mimo and Sheikh Mohammad Nannu, at the final two minutes of the game, dragged Bangladesh to the half dozen mark in the game. The other scorers were Mamunur Rahman and Hasan Zubayer. The lone goal scorer of Oman was Rajab Basim.
With the day’s well merited victory, hosts Bangladesh not only reached the 12-team Asian Games Hockey finals as the top team of the qualifying round, but also took revenge of their 2-4 goals defeat against Oman in the Asia Cup Hockey held in Malaysia last year. Six teams — South Korea, Pakistan, India, Japan, China and Malaysia — will directly play in the Asian Games Hockey finals to be held in the third biggest South Korean city of Incheon September-October this year alongside six top teams of the just concluded qualifying round.
On completion of the eight-team qualifiers, six-teams — Bangladesh, Oman, Sri Lanka, Singapore, Iran and Chinese Taipei — advanced to the 12-team Asia Games Hockey finals as the top six finishers while Qatar and Hong Kong were eliminated from the race as the 7th and 8th placed teams in qualifiers.
Asian Games Qualifiers: Final Positions:
01. Bangladesh
02. Oman
03. Sri Lanka
04. Singapore
05. Iran
06. Chinese Taipei
07. Qatar
08. Hong Kong China