How to Seriously Seek Knowledge 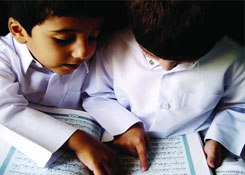 The Prophet (peace and blessings of Allaah be upon him) said: “Knowledge is gained by striving for it.”
Ibn ‘Abbaas said: “‘Be faithful slaves to your Lord, patient and learned.’ And it is said that the good instructor is the one who starts teaching people simple matters of knowledge before more difficult ones.”
It was narrated that Qays ibn Katheer said: “A man came from Madeenah to Abu’l-Darda’ in Damascus and he said, ‘What brought you here, my brother?’ He said, ‘A hadeeth which I have heard that you narrate from the Messenger of Allaah (peace and blessings of Allaah be upon him).’ He said, ‘Have you come for any other reason?’ He said, ‘No.’ He said, ‘Have you come for trade?’ He said, ‘No. I have only come to seek this hadeeth.’ He said, ‘I heard the Messenger of Allaah (peace and blessings of Allaah be upon him) say, “Whoever follows a path to seek knowledge, Allaah will make easy for him the path to Paradise. The angels beat their wings in approval of the seeker of knowledge, and those who are in the heavens and on earth pray for forgiveness for the scholar, even the fish in the water. The superiority of the scholar over the worshipper is like the superiority of the moon over all other heavenly bodies. The scholars are the heirs of the Prophets, for the Prophets did not leave behind dinars or dirhams, rather they left behind knowledge, so whoever gains knowledge has gained great good fortune.'” (narrated by al-Tirmidhi, 2606; classed as saheeh by al-Albaani).
These are some of the virtues of knowledge, and this is just a drop in the ocean. If we were to mention all the virtues of knowledge, it would take too long. Perhaps what we have mentioned here will serve as a reminder to the one who has a heart or gives ear whilst he is heedful (cf. Qaaf 50:37).
With regard to the way to gain knowledge, it is to fear Allaah (taqwa) and to be aware that He is always watching, in secret and in the open. Then one should learn from the scholars whose knowledge and religious commitment can be trusted. If you find a scholar who meets this description, then cling to him and consult him in order to gain knowledge. If you cannot find a scholar, then look for a seeker of knowledge (taalib ‘ilm), and if you cannot find such a person, then you must study by using tapes and books that deal with the basic issues of Islam according to the correct methodology of sharee’ah.
If you ask, what are the books that we should study?
The answer is:
First of all you should take a gradual approach to acquiring Islamic knowledge. For each branch of knowledge there are specific books. The first thing you should study should be ‘aqeedah (basic tenets of faith, doctrine), then the sciences which will help you to understand the Book of Allaah and the Sunnah of His Messenger (peace and blessings of Allaah be upon him), such as Arabic grammar, usool al-fiqh, mustalah al-hadeeth, then fiqh and Tafseer… before all of that you should start by memorizing Qur’aan, because all other branches of knowledge are studied to help one to reach a correct understanding of the Qur’aan.
Here we will give you a list of books, organized in order of priority.
On ‘Aqeedah: Start with the book al-Usool al-Thalaathah [available in English as “The Three Fundamental Bases of Islamic Theology”], then Kitaab al-Tawheed [available in English as “Kitab al-Tauhid”], then Kashf al-Shubuhaat, all by Shaykh Muahmmad ibn ‘Abd al-Wahhaab. Then read Kitaab al-‘Aqeedah al-Waasitiyyah [also available in English as “Principles of Islamic Faith”] by Shaykh al-Islam Ibn Taymiyah.
After studying and understanding these books, move on to Kitaab al-Ajrumiyyah, on Arabic grammar, then Kitaab al-Usool fi ‘Ilm al-Usool, on usool al-fiqh, then Kitaab Usool al-Tafseer – both by Shaykh Muhammad ibn ‘Uthaymeen, may Allaah have mercy on him. Then study al-Arba’een al-Nawawiyyah [al-Nawawi’s 40 Hadeeth, available in English in several translations] on hadeeth, then ‘Umdat al-Ahkaam, also on hadeeth. Then start studying fiqh, and it is OK to study the fiqh texts of any of the recognized schools of thought, such as Bidaayat al-Saalikeen, ‘Umdat al-Fiqh, Matan Abi Shujaa’, and Matan Khaleel. We do not want you to be biased towards any of the madhhabs, rather your study should be organized and based on the well-established principles, so that your pursuit of knowledge will be enhanced and you will follow the evidence, not be biased towards any particular madhhab.
It should be noted that the books mentioned above are to be studied so that you memorize and understand them. Try to get hold of tapes of the scholars who have commented on these books, such as Shaykh ‘Abd al-‘Azeez ibn Baaz, Shaykh Muhammad ibn ‘Uthaymeen, Shaykh ‘Abd-Allaah ibn Jibreen, and others.
After studying fiqh, read two books on Tafseer. Start with Tayseer al-Kareem al-Rahmaan fi tafseer kalaam al-Mannaan by Shaykh ‘Abd al-Rahmaan ibn Sa’di (may Allaah have mercy on him), and Tafseer Ibn Katheer [an abridged version in 10 volumes is available in English].
These are the most important books which the seeker of knowledge should study.