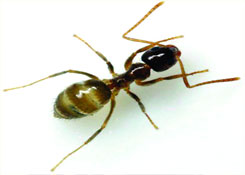 A  dab of the venom of the fire ant (seen at left) would kill some insects, but not Rasberry crazy ants (at right). When attacked, the crazy ants secrete a poison neutralizing acid. By rubbing themselves down with this acid, crazy ants live to keep fighting — and gaining turf.
Fights broke out recently in a Texas research lab. No, the scientists didn’t throw any punches. Instead, two types of invasive ants duked it out. And despite being the little guys, a species of “crazy” ants successfully fought off what should have been a lethal poisoning by attacking fire ants.
Both types of South American ants cause big problems in the southern United States. Red imported fire ants have been spreading since they first invaded in the late 1930s. These pests, which can inflict a painful sting, have been overrunning native ants. They’ve also been setting up big colonies in suburban yards. Tawny crazy ants are more recent invaders. An exterminator named Tom Rasberry first raised alarms about them in 2002. These ants form giant colonies — sometimes in homes and even inside electrical appliances.
Although they don’t sting, crazy ants do run quickly in all directions when excited. Indeed, that’s how they came to be calledcrazy. In the southern United States, these ants also have been overrunning other ants. They even have been displacing fire ants, notes Edward LeBrun. He’s an ecologist at the University of Texas at Austin.
To probe how the little crazies hold their own against the poison-producing fire ants, LeBrun staged a few battles between the species. In one corner were the fire ants. Their challengers: the tawny crazy ants.
Fire-ant venom can kill many types of insects. But the crazies defended themselves against that poison with their own natural chemical, an acid. LeBrun’s team now suspects that this acid treatment may explain why crazy ants seem to be gaining an upper hand in nature.
The group reported on the crazies’ victories February 13 in the journal Science.

The crazy defense
To better understand how crazies survive a fire-ant attack, LeBrun performed a series of tests. He attracted both aggressive species to the same place using a yummy cricket as bait. The fire ants arrived at the food first. When the crazy ants showed up, they sprayed the fire ants with formic acid from a small opening in their abdomens. The fire ants fought back by producing droplets of milky venom from their rears. They then dabbed the venom on the crazy-ant attackers.
Immediately, each venom-dabbed crazy would retreat and curl up its abdomen between its legs. Then, it secreted formic acid onto its mandibles (pincerlike mouthparts). These crazy ants now quickly groomed themselves, from head to hind, spreading the acid all over. And that acid neutralized a fire ant’s venom, the scientists found, making it harmless.
This formic-acid rubdown allowed about 98 percent of crazy ants to survive a fire-ant attack. That suggests formic acid plays both offensive and defensive roles for the little crazy ants.
To confirm the acid’s role, LeBrun and his coworkers used nail polish to paint over the small opening through which crazy ants secrete that formic acid. This cut the crazy ant’s survival rate in half. Only 49 percent of crazy ants survived being dabbed with fire-ant venom when they could no longer secrete formic acid.
The scientists also exposed another ant species to fire-ant venom then treated it with formic acid. These ants survived as well.
Eight or 10 different species of crazy ants inhabit the southern United States, John LaPolla told Science News. A biologist at Towson University in Maryland, he did not work on the new study. Tawny crazy ants may not be the only ones able to defend themselves on the battlefield with formic acid, he says. To be sure, more studies will be needed.
While crazy ants and fire ants have clashed in the United States for a dozen or so years, they have been at it much longer in South America. There, the native range of both types of ants overlaps. And that long exposure may have given crazy ants time to evolve their poison-neutralizing technique, LeBrun says.
When dabbed with venom from fire ants, crazy ants of the species Nylanderia fulva curl their hind ends up between their legs and secrete droplets of formic acid. The ants then give themselves vigorous rubdowns, smearing the acid on their bodies. Most survive the attack.