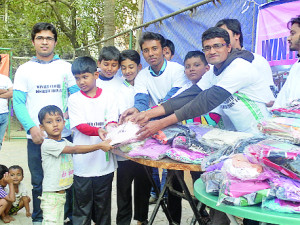 Warm Clothes were distributed amongst the cold-stricken distressed by Youth Wave Students Society (YWSS) Gulshan on January 25, 2014 at the local playing field. The program was presided over by Mr. Md. Alauddin, President of Gulshan Branch for YWSS. Mr. Kamrul Islam, Secretary for Office, YWSS Central, was present at the ceremony as Chief Guest.
The Chief Guest, in his speech, thanked the organizers, the volunteers and the donors for the unexpected enthusiastic response and hoped that YWSS Gulshan would come up with similarly successful events in both the far and the near future.
Mr. Shad bin Jausim, Secretary for Finance, YWSS Central, and Mr. Mahfuzur Rahman, Secretary for IT and Social Activities, YWSS Central, were present at the occasion as Special Guests.