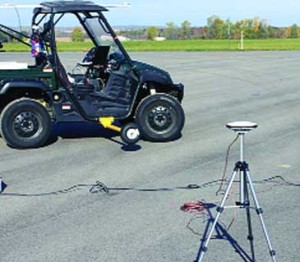 Designing an electric car isn’t as simple as it might seem. Engineers can’t just swap out the gas tank for a big bank of batteries. Besides using a different energy source, many electric cars also transfer energy to the car’s wheels in a different way. Instead of gears, they relay the power with electrical cables. This simplifies a car’s mechanical layout. It also, however, makes it much harder to control an electric car’s wheels during a turn. Luckily, engineers at Ohio State University think they’ve solved it. Their solution: They use computers to control the speed of each individual wheel.
A typical car produces power when its engine burns gasoline (or diesel) to move a piston up and down in a cylinder. The transmission transfers that mechanical energy to the wheels. It does so through a variety of rods, gears and other equipment. Sometimes that power only goes to two wheels (as in front- or rear-wheel-drive cars). Four-wheel-drive vehicles provide torque to each wheel. (Torque is a twisting force — unlike the push or pull that tends to shove or tug an object in one direction.)
To make today’s vehicles run smoothly as they turn corners, automakers include a set of gears known as a differential. It allows some wheels to rotate at different speeds. To be precise, it lets wheels on the outside of a turn rotate faster than those on the inside of a turn. They have to, explains Junmin Wang, because wheels on the outside of the turn have to travel farther, in a given span of time, than do the inside wheels. (A mechanical engineer at Ohio State University, Wang studies how to make electric cars safe and reliable.)
Without a differential, wheels on one side or the other would slip or skid during every turn. That would decrease the vehicle’s overall traction. It also would make car tires wear out faster than normal.
The challenge, Wang says, has been coordinating wheel speeds in all-electric vehicles without using a differential. Not only do electric vehicles send power to the wheels through wires, but many also give each wheel its own motor. (This tends to make the car lighter.) But, a computer must control each in-wheel motor’s speed.
Determining how fast each wheel should rotate remains a big challenge. That’s what Wang and his team worried over while designing their all-electric car. Their prototype, or early version, began its life as an off-road vehicle (like many armers and hunters use).
The engineers removed their car’s engine, transmission and differential. Then they installed a motor in each wheel and a computer. With its extra-heavy-duty batteries, the final car tips the scales at about 800 kilograms (a little more than 1,750 pounds). That’s about the same as the original vehicle. If they had this altered a full-size car this way, the weight savings would have been even greater.
In earlier studies, Wang notes, some researchers tried to gauge a wheel’s speed with cameras or with microphones (listening for a skid, for example). His team approached things in a new way. They estimate the forces on a car’s wheels when it rounds a corner.
The computer that controls the wheels receives its commands from the steering wheel, gas pedal and brakes. The car updates those commands about 100 times each second. The computer also gets information from an accelerometer (a sensor that measures changes in the rate of movement) and other sensors. For example, one of those other sensors lets the computer know if the car is skidding sideways.
Finally, data from a Global Positioning System (GPS) device provides data on the car’s speed. (Normally, a car’s speed is measured by a device that measures how fast the car’s transmission is turning. But remember, Wang’s car lacks that transmission.)
With each new batch of data, the computer calculates how fast each wheel should be rotating to make the car’s ride safe and smooth. Then it directs the batteries to deliver the proper amount of power to each wheel. Afterward, the computer checks how each wheel responds. If each wheel isn’t turning at the proper speed, the computer will adjust it. Wang’s group shares details on this computer control of their car’s wheels in the January 2013 issue of Control Engineering Practice.
“The computer and sensors make a virtual differential,” explains Wang. If a vehicle doesn’t have a real, gear-based differential, he notes, some sort of computerized control is vital. After all, if a car’s wheels don’t rotate at the proper speeds, they could send the vehicle in the wrong direction or into a skid, flip or crash.
The team’s results “are very interesting,” says Pierre Sicard. He’s an electrical engineer at the University of Quebec in Three Rivers, Canada. Monitoring wheel speed is useful for preventing the car from skidding or locking up its brakes, he notes.
But monitoring wheel speed can help in other ways too, he adds. For instance, electric vehicles can recover energy when they’re braking. (In most cars today, braking converts kinetic energy into heat, which is lost. But with the right equipment, the kinetic energy of a car’s motion can be converted to electrical energy. This can be returned to the batteries and stored for later use, Sicard points out.) Boosting energy efficiency is one of the big challenges automotive engineers will face with all cars in the future.
More and more electric vehicles soon will be hitting the roads. Research by Junmin Wang’s team and others will undoubtedly help make those cars lighter, safer and more energy-efficient.