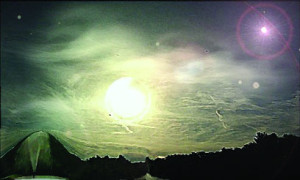 The man had deep worry lines between his eyebrows, although he was only in his twenties. When he woke up after a restless sleep, he looked at the window. Mid-afternoon sun shone through cracks in the blinds. He checked his bedside clock: 5:51 a.m.
The clocks were still wrong… and in sudden panic, he reached out for his wife. Yes, she was still there, still safe beside him, or as safe as she could be. She lay with her back toward him, her shoulders bare and beautiful.
At 6 a.m. the house audio turned on. The usual announcers spoke, describing help for victims of a distant earthquake. They said an international peace meeting had been a success, and the weather would be warm and sunny with no break in the drought, but household conservation efforts had exceeded goals.
She stirred, took a deep breath, then another. “Good news?”
“As always,” he answered heartily. It was their private ritual. Rumors circulated about protests and arrests. Just a few days ago the network’s clocks had gone haywire, but then it recovered and continued immediately with no other changes. The news had ignored it entirely.
Suddenly he worried that he and his wife hadn’t mentioned the time change out loud, and maybe their silence gave them away.
“Six a.m. in the afternoon. That’s weird,” he said, just to say something.
“Sorry,” she whispered.
He hadn’t meant her to take it that way. He held her tight, hoping that if she knew he still desired her, she would know he didn’t blame her. “It’s a beautiful day,” he said. “Up and at ’em.”
She seemed to understand. She showered quickly while he shaved.
In the kitchen, the screen on the refrigerator recommended healthy breakfasts: whole-wheat cereal, skim milk, oranges, and coffee. It would record their choices, count calories, and adjust subsequent suggestions. He realized that they did as they were told as much out of habit as strategy. The audio feed continued to play.
She ate silently, staring. Maybe she was listening for clues, for changes in the pattern of information. He wished he could help her.
He worked as a physician’s assistant, a job he might have wanted even if he had been offered a choice of careers. He did what he could to fight back. More patients than ever were making themselves fat as a form of silent, visible protest. They claimed they couldn’t help it and asked him to check for endocrine problems. They were probably buying food on the black market, but they had to pretend to be ill, so he sent them home with the diagnosis they needed.
But other patients arrived dangerously anorexic, or depressed, or paranoid, or toxic with anger, and they needed real help. A few days ago, when clocks had suddenly reset themselves to 00:00, he had heard hopeful whispers in the waiting room: Maybe something broke. But nothing else happened, life went on as usual, and hopes died.
“Maybe,” his wife said, coffee cup in hand, “I should just go to work and leave Aunt Becky alone.”
That was their code word for the network. He opened his mouth to blurt out no, but stopped. He ate a spoonful of cereal to try to calm himself. It had no taste. He swallowed. “I think you should try to… talk to her again.”
“Again?”
“Well, you got a little change. That must mean something.”
A few days ago, when his wife and her team of saboteurs had broken the network apart, for an instant it had stopped, but they hadn’t done enough. It reset itself, she had whispered in his ear when she came home that evening, and he had held her for a long time as she wept, while the clocks said it was midday.
She shook her head, her hair waving softly around her tight face. “But you…”
“Everyone has family problems.”
She stared at the audio speaker.
“But she could be… angry. She could do something.”
He got up, refilled her coffee cup, then emptied the pot into his own. “I’m not angry, not with you. I’m proud of you, whatever she does.”
She drank her coffee. He studied her face as he finished eating, trying to see if she believed him, but he couldn’t guess her thoughts at all. The audio feed babbled on and on.
“Okay,” she whispered, and gave him a look that was more worried than hopeful. They got up and stacked the dishes. He hugged her and tried to memorize her body against his, every place where her curves and bones touched him: sternum, ilium, ulna, sartorius, masseter. The names might help him remember her, if he had to.
They left the house and didn’t lock the door behind them. It would lock itself or open itself depending on who tried to enter. He glared at the sidewalk. If they couldn’t lock their own doors, was it their home? Was anything theirs? He acknowledged the anger and tried to let it pass, just as he counseled his patients.
She walked toward her car and got in quickly. He studied her to memorize the movements of her muscles: gluteus, gastrocnemius, biceps, deltoid. He noted the color of her eyes and the curve of her lips. But as she backed down the drive, he turned away, ashamed. He knew he should hope that she succeeded, but he only hoped to see her again.