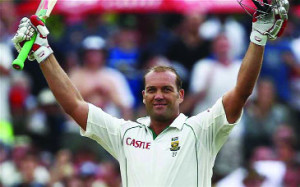 The moment you are reading this article, Test cricket will have already lost one of the finest cricketers of all time. South African super star Jacques Kallis is considered as equivalent to Zaheer Khan and Rahul Dravid combined in Test Cricket A wicket that became lucrative gift that captains from opponent teams would ask to their bowlers. A wall that barely cracked and a bowling machine that brought break through when required with his wild out swing. He has announced to retire from Test Cricket after the final Test against India (from 26-30 December) in Durban where he started his career.
Since the retirement of Brian Lara in 2006, it took 6 more years   until world cricket lost any other great players. But over the last two years, player like Ponting , Dravid and lately Sachin Tendulkar not only stunned fans but also brought end to a generation that fascinated this game of cricket for last couple of decades. And now, Jacques Kallis is new addition to this list of greatest players who have ever served this game. Unlike others, Kallis has been contribution both with bat and ball when required.  Having started playing internationally aged 20, Kallis scored 13,174 runs and took 292 wickets in 165 Test matches for the Proteas (South Africa). It was in the 1997 Boxing Day Test at the MCG that Kallis announced himself on the international stage, making 101 on a crumbling last-day pitch as he steered South Africa to a draw against an Australian attack including Glenn McGrath and Shane Warne. Kallis has also accumulated 11,574 runs from 325 one-day internationals and is hopeful of playing in the 2015 World Cup.
He was awarded Test Batsman of The year in 2005 and has been top in world all rounders list. Currently he is third in Test all rounder list after Ashwin and Shakib Al hasan. Kallis and West Indies great Garfield Sobers are considered the best two all-rounders of all time. In the tables below, records of Jacques Kallis are shown:
ICC awards

The 2014 FIFA World Cup will be the 20th FIFA World Cup, that is scheduled to take place in Brazil from 12 June to 13 July 2014. It will be the second time that Brazil has hosted the competition, the previous being in 1950. Brazil was elected unchallenged as host nation in 2007 by FIFA. The national teams of 31 countries advanced through qualification competitions that began in June 2011 to participate with the host nation Brazil in the final tournament.
A total of 64 matches are to be played in twelve cities across Brazil in either new or redeveloped stadiums, with the tournament beginning with a group stage. For the first time at a World Cup Finals, the matches will use goal-line technology. Teams from 4 pot were drawn into 8 groups on 6th December.
England is considerd to be in Group of Death (group D) with Italy and Uruguay. Those 8  groups are:
Treble in One Series
Hitting a century is considered equal to picking 5 wickets. But hitting three consecutive century or three in one series not only makes team win, but also earns the player man of the match in most of the cases. Above all, his name gets enlisted in a table that very few batsmen can get. Even players like Tendulkar, Ponting or Viv Richards might envy for not reaching to that table. Quinton de Kock from South Africa and Hafeez from Pakistan recently scribed their name in that list of record with wonderful contribution for their countries to win the series.
Quinton de Kock hit his third century in a row as South Africa recovered from a poor start in the third and final one-day international against India in last month. De Kock made 101 in a South African total of 301 for eight. The 20-year-old left-hander joined four other players who had hit a hat-trick of hundreds in one-day internationals – Pakistan’s Zaheer Abbas and Saeed Anwar and two South Africans, Herschelle Gibbs and AB de Villiers. Kock had scored 135 and 106 in the first two ODIs of the series respectively.
On the other hand Mohammad Hafeez led Pakistan to a robust eight-wicket victory over Sri Lanka by smashing a third century of the series in the fourth one-day international. Pakistan won  the series with 3-2 . Hafeez became the sixth batsman in all one-day cricket to hit three tons in one bilateral series. Mohammad Hafeez’s 448 runs is the second-highest aggregate in an ODI series by a Pakistan batsman. He fell three short of Salman Butt’s 451 in a five-match series against Bangladesh in 2007-08. Hafeez’s three centuries equal the most by a Pakistan batsman in any ODI series. Zaheer Abbas and Saeed Anwar have also scored three tons in a series; they did it in consecutive ODIs.

Original FIFA World Cup in Bangladesh
The Coca-Cola FIFA World Cup Trophy arrived in Bangladesh on December 17 and thousands of soccer fans  had the privilege to come very close to the trophy from 17-19 December. The Coca-Cola Company in partnership with FIFA and Bangladesh Football Federation (BFF worked together to bring the desirable FIFA World Cup Trophy to Bangladesh.  A replica of FIFA World Cup had toured Bangladesh in 2002. But, this was the first time that the authentic, solid gold FIFA World Cup trophy arrived in Bangladesh.
BFF president Kazi M Salahuddin along with representative of Coca-Cola, corporate partners of FIFA, received the trophy at the airport. The trophy was kept open for approximately 15,000 invitees to watch it for two days on Wednesday-Thursday at Hotel Radisson so that the visitors can take photos with the trophy. Originally, the trophy was scheduled to be displayed at the Bangabandhu National Stadium, but the venue was later shifted to Hotel Radisson for security reasons. After the three-day tour of Bangladesh, the trophy was taken to Bhutan on December 20. Immediately after landing in Bangladesh, the trophy was taken to Bangabhaban and shown to President Abdul Hamid. In presence of the Prime Minister, the FIFA and BFF officials unveiled the 36.5 centimeter long Gold Trophy — 13 centimeters in diameter and 6.175 kg in weight.
This is the third time that the Original FIFA World Cup™ Trophy is having tour around the world. The 2013/2014 Trophy Tour will visit 88 countries during its 267-day duration. The Trophy Tour began its journey in Rio de Janeiro on 12 September 2013. Departing from the famous Christ the Redeemer statue, the FIFA World Cup™ Trophy will travel around the world for nine months before returning to the country that will host the 2014 FIFA World Cup: Brazil. The total distance covered during the Tour will be 149,576.78 km (92,942.702 miles). In other words, more than three times the circumference of earth.
The first time the Original FIFA World Cup™ Trophy made an unprecedented tour visiting 31 cities in 28 countries over a three-month stretch was in 2006, from 7 January to 10 April, before the FIFA World Cup in Germany. However, in 2010 when Coca-Cola and Fifa took the trophy to 94 cities in 84 countries, it provided more than 500000 fans across five continents an opportunity to be a part of the trophy tour celebration.
The World Cup is a gold trophy that is awarded to the winners of the FIFA World Cup  tournament. Since the advent of the World Cup in 1930, two trophies have represented victory: the Jules Rimet Trophy from 1930 to 1970, and the FIFA World Cup Trophy from 1974 to the present day. “FIFA World Cup Trophy”, was introduced in 1974. Made of 18 carat gold with a malachite base, it depicts two human figures holding up the Earth. When Trophy was made, at that time, the trophy cost about USD 50,000, now valued over USD 10 million (77,35,00000 Bangladeshi Taka). The current holder of the trophy is Spain, winner of the 2010 World Cup.